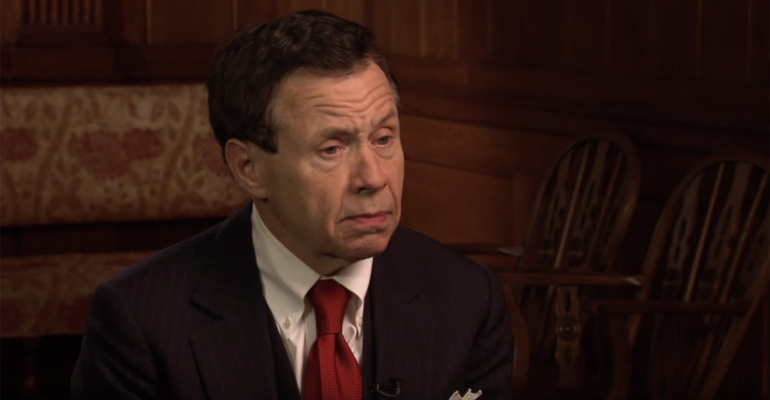 David Darst on Why He's Joining One of Dynasty's Largest RIAs

David Darst, the well-known investment strategist and Morgan Stanley veteran on joining Houston-based Americana Partners, his family's connection to The Alamo and why now is a time for investors to keep some cash on hand.

For 17 years David Darst was the high-profile chief investment strategist for Morgan Stanley Wealth Management. He's written dozens of books, appeared frequently on CNBC and other market news shows, and has lectured widely on investment strategy, both to large teams of advisors and at Yale and Harvard Business School. This week, Dynasty Financial Partners announced Darst was joining his former Morgan Stanley colleague Jason Fertitta at Americana Partners, the $6 billion registered investment advisor that broke away from Morgan Stanley in April, making it the largest breakaway so far this year. He'll report to Fertitta, setting the firm's asset allocations, and advise Joe Dursi, Dynasty's chief investment officer, and Dynasty's network of advisors.

WM.com: You’ve lead investment strategy at one of the largest wall street firms for decades. Why move now to the relatively smaller world of an independent RIA?

Darst: First of all, my family—my daughter and her husband—moved to Texas four years ago. I have visited them 41 times thus far, and they said, Why don’t you consider moving here? I called Jason (Fertitta), whom I have known for over 12 years and asked him if he had space for me. it’s geographical but also I am very turned on by the way the business is run, the independence, the flexibility and to have the whole scope of the investors. I have family roots in Texas going back all the way to the Alamo. The oldest man to die there was Jacob Darst. The stars lined up for me to be here by the business opportunity as well as the geographic opportunity.

WM.com: You're known as much as an educator to advisors around the markets as you are a strategist; will that be part of your role at Dynasty?

Darst: Yes I was very much thrilled and honored to have been asked to help out to continue educating the advisor population. Within the Dynasty network there are about 50 different network firms, partner firms, and a number of these gentlemen and ladies I have known from my Morgan Stanley or Goldman Sachs days or from my industry days or having taught at Yale and Harvard, and they reached out and said, When can you come to LA? When can you come to Florida? But my main focus is to realize and help Jason to help the Texas ambitions, and then the regional ambitions and then national ambitions of America.

Houston is Americana’s headquarters, but it also has offices in Dallas and Austin and is looking to export this platform, to deepen it within Texas and beyond, which was extremely appealing to me. It wasn’t a boutique closet operation that would be limited to just a neighborhood: This is one of the largest RIAs in the U.S. and is one of the largest firms to go independent. That was very appealing. I have known Jason and his team for years and years, and my son-in-law has been a satisfied and happy client of Jason, so it all came together.

WM.com: Had you been aware of Dynasty and the firms it works with? What’s your view on the independent RIA space?

Darst: I had been aware of Dynasty for a number of years. The folks there—Todd Thompson is a legend and ran Citi for years, and a number of the Smith Barney people who came had come from the Citigroup franchise so I knew of Dynasty and had been watching it for some time. I knew the founders in our days overlapping at Morgan Stanley when Morgan and Smith Barney joined forces that was an added plus to note that Jason and our team were going to be part of the Dynasty network and platform.

To me this world is going in the direction of greater flexibility, greater freedom, greater independence. Entrepreneurship is being championed and encouraged. I see this in the RIA space. Many of the teams I have worked with had decided to do this. I have been watching this for many years, seeing teams set up practice and have their business expand so dramatically with the opportunities. I have not had one person say this was a mistake or I should have stayed with the firm. There is a great place for nationally oriented wealth management firms, and there is a space for upstarts, for entrepreneurs. Many of Jason’s clients are entrepreneurs in energy, real estate and technology, and have gone overboard with enthusiasm, letting the "entrepreneurship gene" in Jason's DNA express itself. The RIA is not for everybody, but it is for those who have the mindset to run their own business and be the architect of their own destiny.

I do believe that with passive investing now being 25% of the total market activity, that is going to continue to move in that direction. Indexing will become the new distinctive competence, and there is this opportunity to set asset allocation as one of the critical determinants. We have known this for years in CFA studies, that allocation is the major differentiator in returns over time. The RIA space allows greater choice, freedom and flexibility to select the top managers for asset allocation for stocks and bonds and real assets such as real estate and venture capital. That has been another thing: In my 40 years of business, I have seen that the RIA space has enabled and has basically encouraged and opened flexibility in how a firm invests, and how it operates. Sometimes when you get with a firm, they say this is the way it has to be going forward; it has to be within the confines, constructs and guardrails of how that firm wants you to be. To me the RIA space has allowed a further measure, a greater degree of choice and greater degree of flexibility. That's important because asset allocation will be one of the great determinants of investment performance for the kind of client the RIA firm is addressing itself toward.

WM.com: Advisor head count at the wirehouse firms is relatively flat to shrinking. What’s the future for them?

Darst: I think one of the critical strengths of the U.S. is our financial system. The wirehouses are critically valuable components of the U.S. financial system. In terms of services, they are part of a national core strength. I think wirehouses give you a geographic footprint, a history and a size. I don’t think it’s the twilight for them. Just as a great university is creating tremendous practitioners of the various disciplines, and you get these spinoffs that go and create these tremendous firms even as a university continues to shine, I see a coexistence, a mutual reinforcement and a great future for growth. Just as each university spawns new companies, it does not vitiate or diminish the university. In some ways there will be great growth ahead in the RIA space and great continued strengthening of the position of wirehouses. The financial crisis has led to the strengthening of the financial system systemically. This is not a fly-by-night situation where new firms are sprouting up. It’s not like the cryptocurrency space. It is regulated and closely guarded by supervisors of the financial system, and they both (wirehouse and RIAs) will continue to thrive.

WM.com: With regard to the markets and the economy—the feeling out there is that we’re nearing a cliff, if not now, soon, and the talk is all about a recession, if not this year, next. Where do you think the markets are headed? What advice are you giving to Dynasty advisors?

Darst: We have had a long, long time since the last recession. We have not had a bear market this decade. Every decade since the 1920s has had bear markets, but we have had none. Our feeling is we are going through a sideways up-and-down market, we are going through cyclical corrective and bear phases followed by cyclical rallies, and this will go on for the next couple of years until the next leg. With the dot.com bust and then the mortgage-related crisis of 2008 and 2009, this cycle has cleansed a lot of the excess from the system. We are advising people don’t be afraid to have some defensive investments and a little bit of cash. Cash is now yielding something. We’ve basically got a cautious, slightly defensive stance that we are espousing right now, but we are of the opinion that this will go on. We will have a recession—when, we don’t know. Even economists have to backdate recessions. We have the feeling that this cash can be put to work if the market sells off. We are in a bull market, but there is a trade range of cyclicality and this will go on until people feel more optimistic about the future. We are only 1.2% below the all-time high, which was reached on July 26 of this year. So we’re up there. Are we going to explode to the upside from here? Not yet. This is an up-and-down market where we have to focus and keep both hands on the steering wheel. It’s not like the mid-1990s where you could watch your portfolio compound and grow. This is a time to pay attention.