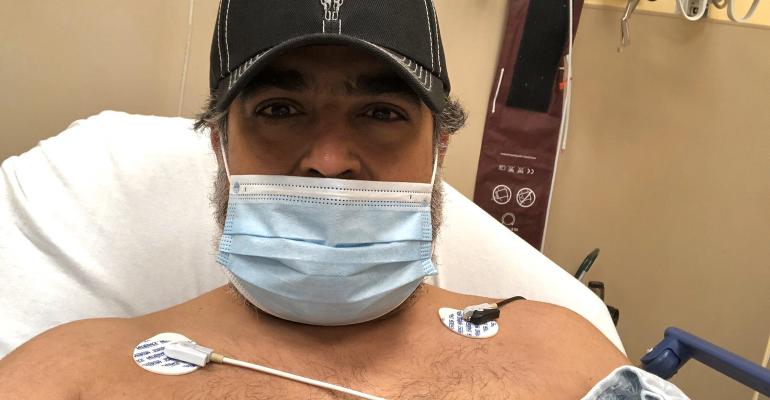 COVID-19 Positive: How One Advisor Is Coping With the Virus

'That first night was just agony and screaming, because the body was under attack. But a virus is not going to take me down,' said Kashif Ahmed, a Boston-based financial advisor who contracted COVID-19.

On April 15, Kashif "Kash" Ahmed, founder and president of advisory firm American Private Wealth outside of Boston and an adjunct professor of finance at Suffolk University, was in the middle of a Zoom session listening to graduate students give their final presentations before earning their master’s degrees when the attack began. He felt perfectly fine at first, but within five minutes was lying on the floor in a fetal position and shaking violently; his body temperature rapidly spiked to 102 degrees. His multiweek battle with COVID-19 had started.

“I was able to figure out how to dial my wife and said, ‘Look, I don't know really what the hell is happening. Can you come pick me up? Because I can't even stand up,’” Ahmed told WealthManagement.com.

Related: Transparency With Diana B.: From Riches to Refugee

Ahmed, a prominent LPL Financial advisor, has lived through scary situations before. WealthManagement.com recently recorded a podcast episode with him, where he describes his story of fleeing Kuwait in the early 1990s when Iraqi forces overtook the country, and was nearly hanged. And while he’s keeping a positive attitude, COVID-19 gave rise to new fears.

“That first night was just agony and screaming, because the body was just... I mean, it was under attack,” Ahmed said. “I don't think I've had this many blankets on top of me to try to stay warm. It was really scary because I didn't know what was happening.”

Related: Transparency With Diana B.: Life in Lockdown During COVID-19

Eventually, the fever spikes tapered off, but the body aches were still debilitating, with his back and chest muscles getting the worst of it.

“My back hurt as if somebody was taking one of those steam rollers over it,” he said. “I told my wife, ‘Go get a baseball bat and just keep hitting my cough muscles,’ because they just hurt. The pain was unbearable in my cough muscles.”

He also lost his sense of taste, something that, as a foodie, really upset him.

“For me not to be able to taste something was just... kill me,” he said. “My tongue was jaundiced yellow, felt like sandpaper. It just felt that there was nothing there.”

The body aches got better, but Ahmed still has weakness. He has a tightness in his chest and difficulty taking deep breaths.

He wanted to know what was going on, but the process of getting tested for the virus brought its own stress, Ahmed said. The hospital where his primary care doctor works refused to test him because they were saving the few tests available for the elderly, those with vulnerable conditions and health care workers. His sister, a doctor, easily received a test, which was positive. (Ahmed suspects he contracted the virus through his sister, who was treating COVID-19 patients.)

Ahmed called around to find a place that would do the test. When he finally found one, the test came out negative—despite his having all the symptoms.

Several days later, he became concerned about his elderly mother, who lives at home with him, and his small children. So he appealed to his primary care doctor one more time, the same one who told him the hospital’s algorithm said he was not eligible to be tested.

“I said, ‘Your algorithm can kiss my ass. I need a test within 10 minutes.’ Then she ordered it.”

As he suspected, that test came out positive. His wife also tested positive. Even though his mother is currently asymptomatic, he’s going to work next on getting her tested, just in case.

Earlier this week, he went to the emergency room to make sure the virus hadn’t led to a stroke or heart attack. He was not admitted, but the ER doctors told him he had inflammation in his lungs probably caused by the virus.

Throughout the ordeal, Ahmed has tried to maintain a positive attitude.

Make no mistake, I will beat it. pic.twitter.com/AOtxp5VAjj

“I think too many people get bogged down and become depressed too quickly,” he said. “For you to effectively fight this, you've got to have that positive attitude. I mean, I am going to fight this. There is no question about it. I've lived through a hanging, right? A virus is not going to take me down.”

“There are so many more that have it far worse than I do. I mean, I'm not living under genocide. I'm not living in a place where there's a drought or famine. I mean, my problems really are not problems,” he said.

Ahmed’s business hasn’t suffered; in fact he’s seen an influx of new clients seeking financial advice due to the financial crisis. His client accounts less than $500,000 are primarily in investment models, so don’t need as much attention. And his administrative assistant handles much of the heavy lifting with client inquiries.

He says his broker/dealer, LPL, has been very supportive. CEO Dan Arnold and other senior executives sent him private messages with offers to help in any way.

Once he recovers, he still plans to be cautious and keep social distancing procedures in place, and urges others to do the same.

“There are a lot of people out there who are quite stupid who don't do the social distancing, who are not doing the protocols,” he said. “I don't want to catch it again from them and bring it home to my children, because my children lucked out that they didn't get it this time. I want to make sure they don't get it.”