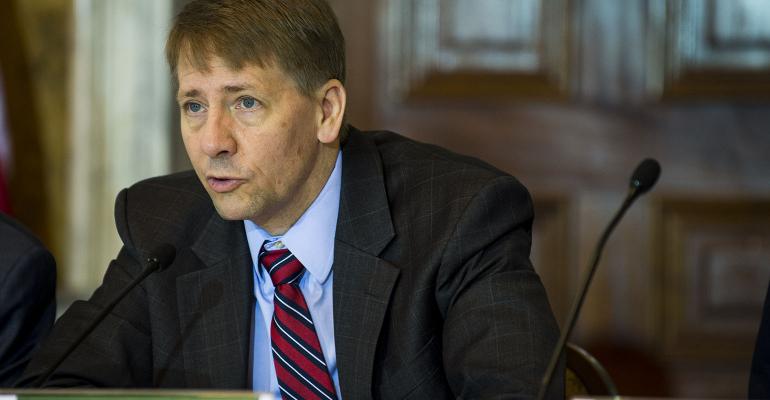 CFPB's Cordray to Step Down, Allowing Trump to Remake Agency

It's been rumored for months that Cordray would resign to run for governor of Ohio.

By Elizabeth Dexheimer and Mark Niquette

(Bloomberg) --Richard Cordray will step down as the head of a controversial consumer watchdog at the end of the month amid growing speculation that he will run for governor of Ohio as a Democrat.

His decision means President Donald Trump should soon get to install his own director atop the Consumer Financial Protection Bureau, a regulator set up in response to the 2008 financial crisis to police mortgages, credit cards and other financial products. Cordray’s departure gives Republican lawmakers and bankers the chance to push a deregulatory agenda at an agency they say has too much power and has burdened lenders with unnecessary red tape.

Cordray, 58, revealed his plans to leave the agency in an email to CFPB staff on Wednesday. He did not specify in the memo what he plans to do next. Washington lobbyists and lawmakers have been predicting for months that he would resign to run for governor in his home state.

“Together, we have made a real and lasting difference that has improved people’s lives,” Cordray said of the CFPB in his email. “I trust that new leadership will see that value also and work to preserve it –- perhaps in different ways than before, but desiring, as I have done, to serve in ways that benefit and strengthen our economy and our country.”

Cordray -- the CFPB’s first-ever director -- is leaving before his term expires in July 2018. Appointed by former President Barack Obama, his status has been in question ever since Trump’s election win.

“We are long overdue for new leadership at the CFPB, a rogue agency that has done more the hurt consumers than help them,” House Financial Services Chairman Jeb Hensarling, a Texas Republican, said in a Wednesday statement. “The extreme overregulation it imposes on our economy leads to higher costs and less access to financial products and services, particularly for Americans with lower incomes.”

For months, Republicans had urged Trump to try to remove Cordray, claiming he lacks accountability and that the CFPB has stifled lending during his tenure. In contrast, Democrats heaped praise on Cordray for making the young watchdog an aggressive regulator, saying he’s helped recover almost $12 billion for consumers. The two political parties had also argued over whether Trump has the legal authority to fire Cordray.

The squabbling isn’t new. In recent years, the CFPB has been at the center of some of the most bitter partisan fights over post-crisis financial rules. GOP lawmakers opposed the agency’s creation through the 2010 Dodd-Frank Act, but were outvoted by Democrats. Obama then made Cordray director in January 2012 in a recess appointment after Republicans blocked his Senate confirmation. Trump now has an opening to remake the agency by picking a leader who is more friendly to banks.

Even as Trump’s push to roll back rules swept through Washington this year, Cordray continued to be a thorn in the industry’s side. In July, he approved a rule that makes it easier for consumers to sue their banks by restricting lenders from settling disputes tied t credit cards and other products through forced arbitration. In October, he announced the completion of a top CFPB priority: a rule aimed at cracking down on payday lenders. Republican lawmakers overturned the CFPB’s arbitration rule last month.

Other initiatives that came during Cordray’s tenure include a high-profile enforcement action against Wells Fargo & Co. for setting up fake customer accounts and rules that require banks to make a good-faith effort to ensure mortgage borrowers can repay their loans.

Massachusetts Senator Elizabeth Warren, the Democrat who is credited with conceiving and setting up the CFPB, has said its actions were necessary to protect ordinary Americans in the wake of the worst economic downturn since the Great Depression.

Cordray is the former attorney general of Ohio who lost a bid for re-election in 2010 before being named to lead the CFPB. He previously held other government posts in Ohio including state treasurer, solicitor general and state representative.

Ohio’s current governor, Republican John Kasich, can’t seek re-election when his second term ends in January 2019. Several candidates have filed for the Democratic nomination so far. Cordray’s entrance into the race would likely cause at least some competitors to withdraw because Cordray is the most popular among party activists, said John Green, a political science professor at the University of Akron.

At the CFPB, a shadow has hung over Cordray ever since a federal appeals court ruled in October 2016 that the agency was unconstitutionally structured. The Washington-based appellate court said the autonomy granted to the CFPB’s director -- who could only be fired by the president for cause -- was a stark departure from how agencies are typically set up.

At the request of the CFPB, the court is reconsidering its decision. While the judges deciding the case could disband the CFPB, the Trump administration would prefer that it just give the president power to fire the agency’s director at any time for any reason. The banking industry says it wants the CFPB reformed so that a bipartisan commission votes on regulations and rules, instead of a single director controlling policy.