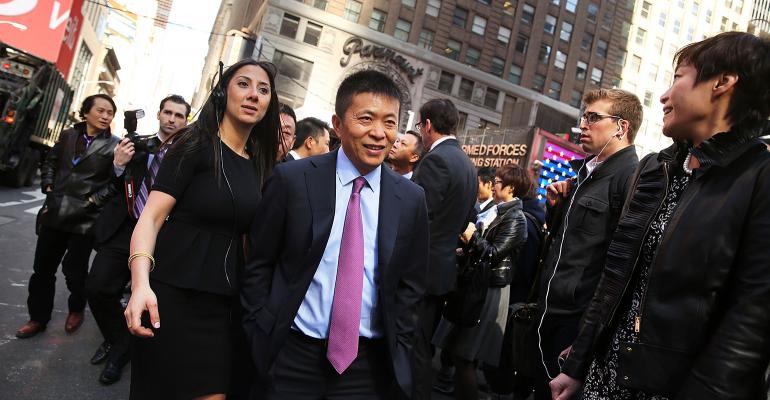 Known more for his financial acumen than strategic insight, Chao is something of an outlier in an industry that celebrates leaders with grand visions of the future. His nickname -- The Accountant -- doesn’t exactly scream cutting edge.

Yet for Chao and Sina’s shareholders, the 50-year-old CEO’s knack for finance is paying off big time this year.

The former audit manager at PricewaterhouseCoopers LLP is sitting on gains of about $423 million after he made a personal bet worth $456 million on Sina shares last November -- paying for more than half the purchase with borrowed money, according to data compiled by Bloomberg. Shares of the online media company have jumped since his purchase thanks to a surge in the value of Sina’s stake in Weibo Corp., a Twitter-like service in China, and Chao’s decision last month to distribute Weibo shares to Sina investors.

The move comes after a growing user base at the microblog lifted the value of Sina’s controlling stake to more than $5 billion, nearly equivalent to the parent company’s market capitalization. Chao’s decision to distribute some of the stake to Sina shareholders has spurred speculation he may do more to unlock the value of the company’s investments, which also include Alibaba Group Holding Ltd. and Leju Holdings Ltd., an online real estate brokerage.

“Chao believes that Sina is significantly undervalued and that’s why he invested,” said Ricky Zhong, a Beijing-based investment director at iMeigu Fund, a hedge fund that invests in U.S.-listed Chinese companies and holds Sina shares. “He understands the company better than any of us. As the CEO and largest investor, Chao now has many tools to unlock the value.”

The November purchase lifted Chao’s total “beneficially owned” stake in Sina to almost 18 percent as of March 31, according to the company’s annual report. While Sina disclosed that the share acquisition was financed by a $230 million loan from Credit Suisse Group AG, it’s unclear where the additional funds came from or whether Chao intends to sell shares to repay the debt. Sina didn’t respond to an e-mail and a phone call seeking comment. A representative for the company confirmed receiving the request.

Chao timed his purchase well. Sina shares traded at $75.12 on Friday, up 81 percent from his per-share cost of $41.49. Chao will also be entitled to an additional 1.1 million Weibo shares when the distribution is paid out in October, a stake valued at about $53 million at the end of last week. Sina fell 1.2 percent in U.S. trading at 9:38 a.m. in New York.

Weibo shares have quadrupled over the past year as the firm’s video content, live-streaming offering and partnership with Alibaba attracted users and advertisers -- easing investor concern over competition from Tencent Holdings Ltd.’s popular WeChat messaging service. The number of monthly active Weibo users rose 33 percent in June from a year ago to 282 million, closing in on San Francisco-based Twitter’s 313 million.

That growth has helped boost the bottom line at Sina, which gets 60 percent of its revenue from Weibo. Sina’s adjusted earnings rose to 27 cents per share in the second quarter, compared with the median forecast of 15 cents in a Bloomberg survey of analysts.

Sina and Weibo’s “financials have been very positive,” said Brendan Ahern, the New York-based chief investment officer at KraneShares, which runs an exchange-traded fund investing in Chinese Internet companies. “Ultimately for any shareholder, to be sitting on the same side of the table, knowing the CEO has a lot of skin in the game, is beneficial.”

Chao has a history of deft financial maneuvers. As Sina’s chief financial officer in 2005, he helped design a “poison pill” to defeat a hostile takeover attempt by online games developer Shanda Interactive Entertainment Ltd. And in September 2009, Chao, along with a group of other Sina executives with private equity backing, invested $180 million into the company, giving him a 9 percent stake. The firm unveiled Weibo a month earlier, a service that helped Sina’s share price triple over the next two years.

Weibo aside, critics say Chao has failed to drive innovation at Sina, allowing the company’s Internet portal business to lose ground against rivals. Even after its recent surge, Sina’s $5.2 billion market value amounts to less than 20 percent of Netease Inc., another Chinese portal company that listed in the U.S. around the same time Sina did 16 years ago.

Chao “likes to do some financial engineering,” said Henry Guo, an analyst at New York-based M Science LLC who has covered U.S.-listed Chinese stocks for a decade. Other than Weibo, “there was nothing interesting, nothing attractive in terms of a business,” Guo said.

Sina is still worth more than its current market price and Chao has shown a willingness to boost returns for shareholders, according to Tian Hou, founder of TH Data Capital, a New York and Beijing-based research firm specializing in U.S. listed Chinese companies. Sina is about 24 percent undervalued when considering its cash holdings and equity stakes in other companies, Ryan Roberts, a senior research analyst at Hong Kong-based financial advisory firm MCM Partners, estimated in a note to clients Sept. 2, based on analysis of the company’s identifiable investment portfolio.

“Chao took a huge risk -- when he bet the house on it, few people were buying,” Hou said. “It turned out to be a good investment.”