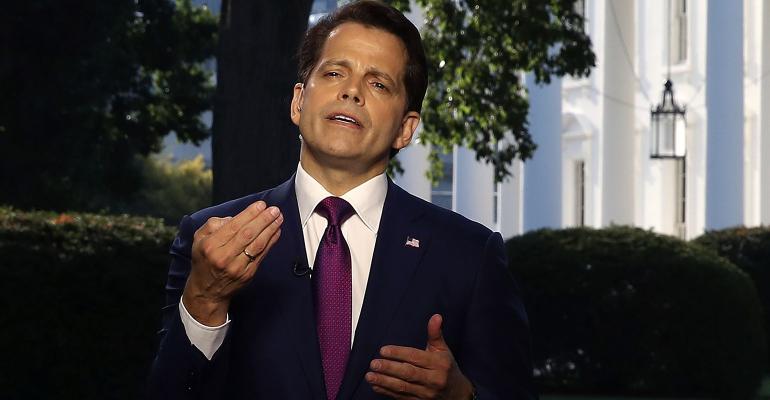 Scaramucci talks about programming his annual conference, what he thinks RIAs will get out of the meeting and why he invited John Kelly, who very publicly fired him from the White House, to be a keynote speaker.

Anthony Scaramucci is back—both with his hedge fund of funds, SkyBridge Capital, and at the confab he’s curated every year but one since 2009, the SkyBridge Alternatives (SALT) Conference.

The meeting went on a one-year hiatus following his brief but explosive 11-day stint inside the Trump administration as communications director. That gig ended when he was very visibly fired by Trump’s then–Chief of Staff John Kelly for, essentially, doing what Scaramucci always does—saying what he thinks, out loud and in public, consequences be damned.

But Scaramucci holds no grudges. In fact, Kelly will be a keynote speaker at this year’s conference. “He’s an American hero,” Scaramucci says. “What I did was fireable.”

Here, he talks to Wealthmanagement.com about why financial advisors should consider coming to his conference, what he learned in Washington, D.C., the state of the hedge fund industry and why he thinks liquid alts are “an unmitigated disaster.”

Wealthmanagement.com: The SALT Conference has always been a very institutional, investment-focused conference for large pools of money, a meeting place for hedge funds and institutional investors. I understand the conference is pivoting a bit toward a wider audience, including financial advisors and registered investment advisors.

Anthony Scaramucci: You have to think about this stuff like programming. At the end of the day, programs that make it are ones that can shift with the times, you know? The reason why M*A*S*H and All in the Family and Seinfeld are no longer on TV is because they are scripted, and that style sort of played itself out.

But something like Meet the Press or The Tonight Show, they could stay around forever because they're constantly evolving and adapting to what's going on and the social culture.

When we started the conference, the hedge fund industry was at an all-time low. It was like March 2009, when the Dow was at like 6,500.

Now, the rising tide of assets means the hedge fund industry is not doing that well again. I think we're in a period of doldrums. In bringing the conference back, we wanted some of the elements of the old conference, which is obviously hedge fund clients and policy people, but we also thought it was important to bring in some private equity people, and bring in some venture capital people.

We're going to have an AI (artificial intelligence) discussion there, which is literally revolutionizing the entire landscape, whether you're a big business, small business, in journalism or in asset management, AI is going to have a huge effect on everybody. We’ve got guys like (AI expert and investor) Kai-Fu Lee coming, with (AOL founder) Steve Case, to talk about that.

We always have a political bent, but it's a bipartisan political bent, so we've got guys like John Kelly, the former White House chief of staff; Nikki Haley, the U.S. ambassador to the U.N.; and we've also got Susan Rice coming with Valerie Jarrett.

I've got Sal Khan coming from Khan Academy. I've got (founder and CIO of Valor) Antonio Gracias coming, the lead board member for Tesla and for SpaceX. (Venture capitalist) Tim Draper's coming. You know? And so again, I'm just trying to reflect and pivot to places that we think are important to discuss.

When I think about what RIAs want, my opinion is they want to look smart. They want to have good ideas that are investable and presentations that will relate to that. They want to be able to explain to their clients some cutting-edge things that you're seeing today that will unfold at least two or five or eight years from now.

It is Las Vegas too. I mean, we're in this world of political correctness and sanitization of language, and we're all supposed to signal to each other how virtuous we are and how great we are. I think all that's a bunch of bull. To me, I'm unapologetically in Las Vegas. In addition to learning something and also meeting people that could potentially help your business, I want you to come and have a good time.

WM: What happens there, stays there.

AS: Yeah, I mean certain parts of it. Hopefully the context leaves, but here's the thing, I guess we're not allowed to have fun, and we want to replace 5,000 years of communication and interaction with something that the ‘politically correct police’ say is acceptable, and you know, it's stupid. I'm not a big buyer into that; I think it's stupid.

WM: You think it's gone too far.

AS: Yes, and this is why Trump is president. Everyone's quietly snickering, they're acting all PC, and then they close the voting booth and they vote for him because they want to drive all these people crazy, you know what I mean?

WM: You think that his supporters are saying one thing publicly but are actually going into the voting booth and voting for him?

AS: There's a thing, you probably heard of it, called the Bradley effect. When Tom Bradley (the African-American mayor of Los Angeles) was running in the (gubernatorial) election, the people were polled and asked, 'Are you going to vote for him?' They said yes, because they didn't want to appear racist. But then when they hit the polls, there was an 80 percent differential between what the polls said and what actually happened. Trump had the reverse of that. 'Are you going to vote for him?' People say no, but then they go to the polls.

WM: Do you think that any of these investigations coming after him, from your experience, have any legitimacy to them? Particularly with regard to Russian collusion?

AS: I know that there's really little to no substance to the Russian collusion. I've got my 11-day Ph.D. in Washington scumbaggery. If there was something to that Russian collusion thing, it'd already be out.

They definitely don't have anything related to Russian collusion. But they're now frustrated by that so they're going to go out and investigate every single, possible thing imaginable. Could they nail him on every single, possible thing imaginable? They might be able to do that. But some of the rising approval rating, in my opinion for Trump, is related to all this nonsense, where the American people are like, ‘OK, guys, come on. It's so obviously transparently partisan, why don't we relax and give it a chill?’

At the end of the day, has he done some things that are probably regrettable? Maybe. So now what are they going to do? Are they going to nail him for that? We'll have to see. But I don't know if the American people are in love with that.

AS: Yeah. My attitude is John Kelly is an American hero. Look, I did something that was fireable (in giving the press his unvarnished opinion of some of the people inside Trump’s circle.) I'm not one of those guys to shirk accountability or responsibility for what I did, and so I reached out to him. We had a great three-hour lunch, and then I invited him to be a keynote speaker. And remember, he's an American hero, he's a four-star general, and he's a guy that I have a lot of respect for. I wasn't in love with the way I got fired. I mean I can make that clear. He could have done it in a Wall Street way and said, ‘Hey, man, I don't want you here, could you disappear over the Labor Day weekend?’ Something like that. I didn't love being exploded from the scene like an Austin Powers supervillain. But I'm glad that it's past me now. At the end of the day, there's no whining in sports or politics. I got my ass kicked, let's move on.

WM: Tell me the difference between Washington D.C. and Wall Street.

AS: They're complete and total lowlife scumbags.

WM: On both sides?

AS: No. The worst person on Wall Street would be the best person in Washington; that's the only way I can describe it. I've never seen anything like it. I remember what the president said about these people; he basically said he thought that the real estate developers were killers until he got to Washington; now he realizes that they're a bunch of babies.

AS: It's the reason why the American people hate these people. What can I tell you? I made a mistake. I wanted to serve my country and I thought that I could do that; I didn't realize I was going to get Reince Priebus and Steve Bannon to do that kind of number on me; I thought they were teammates of mine. I didn't realize that there was a zero-sum game like that, you know? That's my mistake, I own it, let's move on.

WM: You mentioned hedge funds are in the doldrums. Why? Is it a compensation question? Is that compensation structure a thing of the past?

AS: It has to do with the way the Fed has orchestrated, in my opinion, the interest rate policy. It had a very big impact on the hedge fund community. You can't have zero interest rates when every asset is rising.

WM: That's true even for what's called liquid alts, right? The hedge fund strategies in mutual funds or ETF wrappers, those were, for a few years there, going to be the next big thing in retail investment.

AS: I hated those. We have a good brand; we had the opportunity to raise billions of dollars for that strategy when it was popular. But at the end of the day, you need duration for a great outcome, and so we basically said no way to the idea that we would have liquid alts.

I like the taste of vanilla ice cream. I also like the taste of red wine vinegar. But pouring the red wine vinegar over the vanilla ice cream is going to taste like s**t. So you're taking two tastes that you like, you think that pairing them is going to make sense? It doesn't. It's actually an unmitigated disaster. We could've made a ton of money on that, but I'm glad that we avoided it, because it would have hurt our brand.