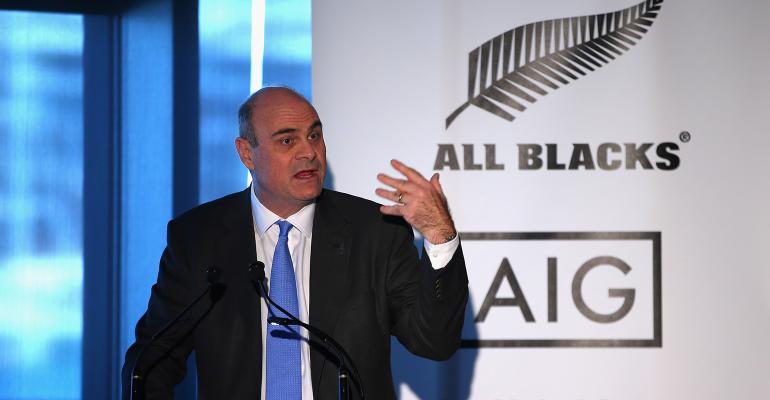 Peter Hancock will remain CEO until a successor is named.

Hancock, 58, will remain CEO until a successor is named, the New York-based insurer said Thursday in a statement. The company’s board said it will conduct a comprehensive search for a new leader, after meeting Wednesday as part of an annual review into the firm’s performance.

“Without wholehearted shareholder support for my continued leadership, a protracted period of uncertainty could undermine the progress we have made and damage the interests of our policyholders, employees, regulators, debtholders and shareholders,” Hancock said in the statement.

AIG shares rose 1.7 percent to $64.50 at 8:41 a.m. in early trading in New York. The stock declined 2.9 percent this year through Wednesday, while the S&P 500 Index rallied 5.6 percent. Icahn applauded the board’s decision in a Twitter post on Thursday.

The move is a “significant positive,” Meyer Shields, an analyst with Keefe, Bruyette & Woods, said in a note to clients. “Of course, there aren’t too many candidates with the skills needed to turn around this troubled global company, but several successful turn-arounds” have occurred in the industry.

Hancock’s successor will be the seventh CEO of AIG since 2005. The company’s complexity bedeviled one leader after another as they struggled to manage a global insurer that was built through decades of acquisitions by former leader Maurice “Hank” Greenberg, and then shrunk through dozens of asset sales after a near collapse during the financial crisis. Doug Steenland, the insurer’s chairman, thanked Hancock for his work in helping repay a bailout that swelled to $182.3 billion.

Hancock “tackled the company’s most complex issues, including the repayment of AIG’s obligations to the U.S. Treasury in full and with a profit, and is leaving AIG as a strong, focused and profitable insurance company,” Steenland said in the statement.

Icahn announced his stake in AIG in October 2015, faulting Hancock for failing to meet return targets and pushing the insurer to split into smaller companies, saying it was too big to manage. He and Paulson won board representation in February of 2016. Paulson’s hedge fund has since been selling some of its stock.

Icahn lauded Hancock when the CEO reached a deal in August to sell a mortgage guarantor to Arch Capital Group Ltd. for $3.4 billion. Hancock has been exiting assets around the world to shrink the insurer, striking reinsurance deals to limit volatility and reducing headcount, partially to reduce costs. The CEO reshaped AIG management, replacing executives including longtime Chief Financial Officer David Herzog and Seraina Maag, who oversaw regional operations.

Still, ratings firm A.M. Best has been reviewing AIG’s financial strength score after the latest losses prompted Hancock to pay about $10 billion to Berkshire Hathaway Inc. to assume risks on insurance contracts that were initiated by his company. The CEO has said that a downgrade could jeopardize relationships with some customers.

“This was the board reacting to the poor news from the fourth-quarter results,” Paul Newsome, an analyst at Sandler O’Neill & Partners, said by phone. “The broader question is how is the management team totally going to change?” he said. “I suspect that the strategy will change, we just don’t know how yet.”

AIG has endured more than a decade of management turmoil. Greenberg stepped down as CEO in 2005 amid regulatory probes and was replaced by Martin Sullivan, who was ousted in 2008 after he underestimated the risk of a housing market collapse. Robert Willumstad held the post for just months until the insurer’s bailout, ceding the job to Robert Liddy who lasted less than a year in what he called “the most stimulating job in America.”

The late Robert Benmosche ran AIG for more than five years, starting in 2009. He brought on Hancock, a former J.P. Morgan & Co. executive, in 2010 and assigned him the next year to run property-casualty insurance, the company’s biggest business. They repaid the government rescue in 2012.