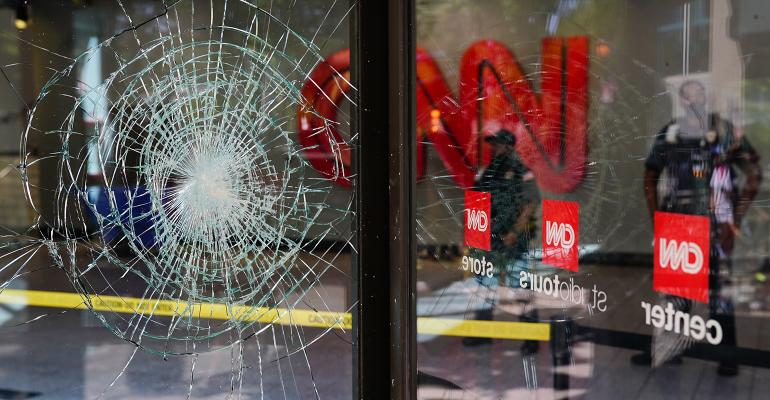 Shortly after reopening his firm’s Atlanta offices in the wake of the COVID-19 pandemic, Riskalyze CEO Aaron Klein closed them again Monday due to riots taking place two blocks away, following protests of the death of George Floyd by a Minneapolis police officer.

“Many Riskalyzers were still on ‘work from home’ waivers, and we want to err on the side of safety for everyone,” Klein tweeted on Sunday. “We’re hopeful that Atlanta rapidly returns to its proud history of non-violent protest against injustice.”

It was only a week ago that the country was rocked by the viral video of Floyd, an unarmed black man who appears to have been choked to death while being pinned to the ground by police officer Derek Chauvin.

Protests have cropped up in some 70 cities around the country, fueled not only by anger over Floyd’s death but also a litany of instances around police brutality and racism. Despite most being peaceful, some have escalated to violent clashes with law enforcement, looting and the destruction of property.

Advisors with offices near the epicenter of these clashes are now finding themselves trying to update their clients, colleagues and others about a new crisis, so close on the heels of the previous one over COVID-19.

Drew DiMarino, the chief growth officer at Riskalyze who lives in Atlanta, told Klein on Friday that riots were developing near their downtown office. Klein said he flipped on his television to see an angry mob damaging the CNN Center, blocks away from Riskalyze’s office.

Riskalyze has 125 employees in its California headquarters and about 45 in Atlanta. After Klein opened both in response to states lifting lockdown orders, he said about 40% of his workforce had returned so far.

“It’s clear that some other elements have taken advantage of some of the protests out there for their own agenda. That created an unsafe situation. We monitored the situation over the weekend and ultimately on Sunday evening made the call to keep the Atlanta office closed,” Klein said.

In the Twin Cities, advisor Kyle Moore has not been able to get into his St. Paul office. His Quarry Hill Advisors is located on the second floor of a commercial building that houses restaurants on the ground floor. Moore’s landlord emailed him on May 29 that the building was to be boarded up in anticipation, blocking any entrance. News outlets in the area later reported that many of the businesses on the same street sustained damages.

Welp, just received an email that my office building is boarded up. Guess I’ll be working from home today.

Moore said the events haven’t been that disruptive since he’s been working from home anyway because of the coronavirus pandemic.

Just outside the cities in Wayzata, Aaron Hasler, managing partner at SkyView Partners, a capital provider for RIA mergers and acquisitions, is also learning to navigate his new surroundings.

Despite being in an upscale part of the metropolitan area, he said it felt like living in a war zone: Helicopters circle all day; his neighborhood smells like smoke; law enforcement Humvees are patrolling major roads, and all the stores are boarded up.

“We like to think of ourselves as a pretty progressive area, but the reality is there’s quite a lot of segregation in the cities and disparities in equity, in general. I think that racial tension has been here for a while, bubbling underneath the surface. With Philando Castile’s murder a few years ago, that started coming to the forefront. And then with George Floyd getting killed it put things over the edge,” Moore said. (Castile, a 32-year-old African American man, was shot and killed in front of his girlfriend and her daughter by a police officer who wrongly assumed Castile was reaching for a weapon during a traffic stop outside of St. Paul in 2016.)

Moore has used his Twitter platform to criticize the bad actors for co-opting the peaceful protests for their criminal behavior.

Klein said that as an adoptive parent to two African American children, Floyd’s death feels personal to him and to many of his employees, and he too has used his social media channels to vent his anger.

“When you see the rule of law not protecting people because of the color of their skin, that poses a severe challenge to our country and who we are as a country,” he said. “I have a ton of respect for law enforcement officers and I think the vast majority of officers exemplify the values that they swore to protect when they put on the badge. We have to eradicate the rest of them out of the position of trust that is law enforcement because every American needs to have the confidence that the rule of law will protect them. I just felt that it was important for me to speak out in that way.”

Some Edward Jones advisors in the affected areas have posted well wishes for their respective cities online as they follow EJ’s instruction to follow guidance put out by local officials over restricted movement around the city and curfews.

An Edward Jones spokesperson said by email that many of its advisors have asked about services such as safety and security resources and emotional support around the issues both fueling and stemming from the conflicts. The firm has created a discussion group for associates "to listen and engage in honest dialogue, address unconscious bias and achieve greater understanding and empathy."