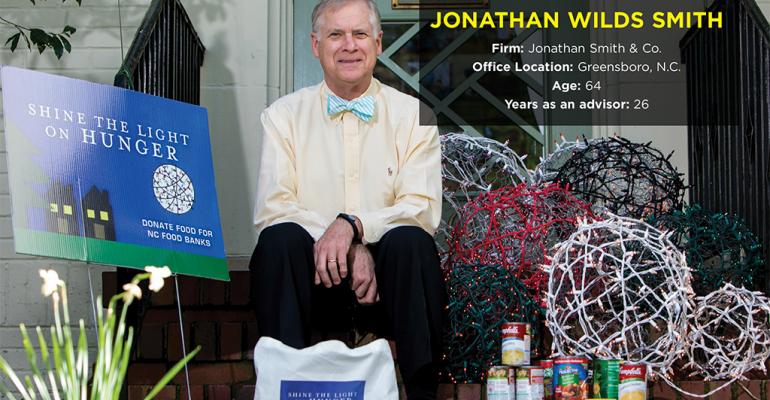 Shining a Light on Hunger

For the past eight years, the Christmas spirit arrives early and sticks around long after the holiday for one advisor’s neighborhood outside Greensboro, N.C.

Starting in November, Jonathan Wilds Smith spearheads a community effort to decorate homes and yards with hundreds of lighted Christmas balls—holiday decorations made out of chicken wire shaped into a sphere and wrapped with strands of white and colored Christmas tree lights. So many homes participate that it’s become a community event, with visitors and residents alike driving and walking through the neighborhood to enjoy the decorations. And with each visit, they’re asked to donate to the Shine the Light on Hunger Food Drive.

“It involves a lot of hands,” Smith says. “It’s pretty amazing. From Thanksgiving through the end of January, the lighted Christmas balls stay up, stay lit, and encourage people—old and young alike—to donate.”

Smith and his family inadvertently started the lighted Christmas ball trend in the Greensboro area almost 20 years ago after receiving a letter from the Sunset Hills Garden Club encouraging the neighborhood to decorate in the “traditional Williamsburg style of tasteful greenery and all-white lights.”

That first year, Smith and his family hung just three lighted Christmas balls—decorated with multicolored lights, of course—low in the branches of a tree on the front lawn. Soon neighbors were asking how they could get their own. Smith organized a workshop to teach everyone the process.

“The thing that makes this whole thing work is that it’s not ours. We’ve sent it out into the wild. People always ask, ‘Aren’t you sad you didn’t patent this?’ And I say, No … you can’t sell fellowship,'” Smith says.

As the craze gained momentum, Smith organized a block party in 2002, which led to the first canned food collection. Smith and his neighbors put out collection bins decorated in lights on their lawns all through the season. The first year out they collected $700 and almost 3,000 pounds of food.

Today, over 400 people participate in decorating their homes with lighted Christmas balls and food collection bins. To date, the annual event has raised about $125,000 and contributed 52,000 pounds of donated food, equal to about 900,000 meals for the Second Harvest Food Bank of Northwest N.C., Greensboro Urban Ministry, and Triad Health Project—an organization dedicated to helping people diagnosed with HIV and AIDS.

Smith unloads the trailers and drives the food down to the organizations. “He loves to create community and has a heart for those who are hungry,” says Smith’s son, Justin, who also serves as a financial advisor at the firm. The project has spread beyond Greensboro, with similar events popping up in California, Texas, Michigan and even Sweden, Smith says.

“If you have a Vermont cart or a wheelbarrow or a utility trailer, just put it out in your front yard. Then hang some lights on it and put up a sign saying, ‘Canned goods for hungry folks.’ People will come by and put food in it—it’s just magic,” he says.