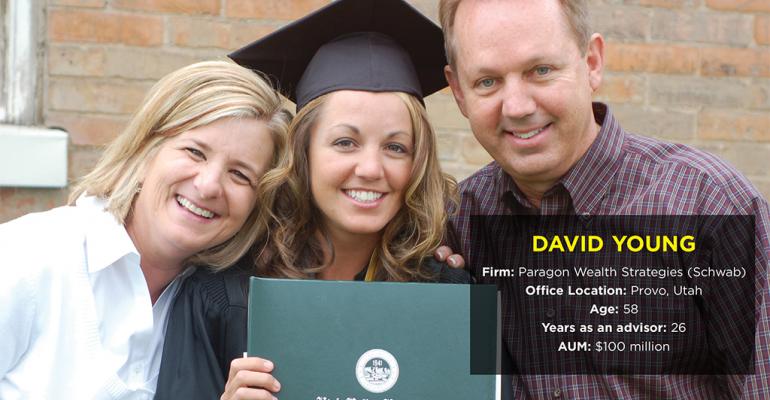 When Provo-based advisor David Young graduated from college, he made his living as a touring magician. He did 350 shows over four years and was easily on the road two months at a time. When he came home for his daughter’s first birthday party, she didn’t recognize his face. “I thought it was time to do something different,” he said.

He put away the magic and brought an entrepreneurial zeal to businesses closer to home: franchises, an interior design store, even a llama farm. But as those expanded across state lines, so again did his prolonged absences. He sold everything in 1986 and turned a personal knack for investing (and some proprietary momentum trading models) into a financial advisory firm, Paragon Wealth Management, which now oversees some $100 million for about 150 clients.

Family is clearly important to Young, so when his son-in-law died suddenly from a brain aneurysm, leaving his 25-year-old daughter Katie alone with a newborn, he was sensitive to the practical struggles she faced, beyond grieving.

Katie knew she’d have to complete her education. She made it work, but it was a struggle, even for someone who had the resources.

There were child care issues to navigate. How do you find someone to watch a baby when you’re at school or at work? How do you track down scholarships or assistance when you have to work to pay for child care? “If you work, you don’t qualify for the grants. But you needed to work to survive. You help your family, you don’t qualify for the grants. That’s circular,” Young says.

Katie earned a bachelor’s degree in business in two and a half years, and she and Young decided to make young single mothers the focus of their philanthropic work.

In 2010 they started the Live Your Dream foundation, and they funded it with a series of runs that soon evolved into larger “raft and runs”—participants paddle five miles down the Provo River, followed by a five-kilometer run. “It’s a unique event,” Young says, and other organizations have approached him about replicating it. Some 300 people participated, and the foundation has raised over $50,000 to fund dozens of scholarships for single mothers with little means to help themselves.

Young also facilitated a client's gift to construct a new, $2 million child care facility at Utah Valley University for single mothers. Its students “pay” for the care by volunteering to watch each other’s children.

Next steps: A clean, intuitive website where single moms can easily find all the resources they need to put their lives back on track. “These women need someplace they can go where they can say, ‘Yes, I can see a path to this. I can see how to make this happen.’”