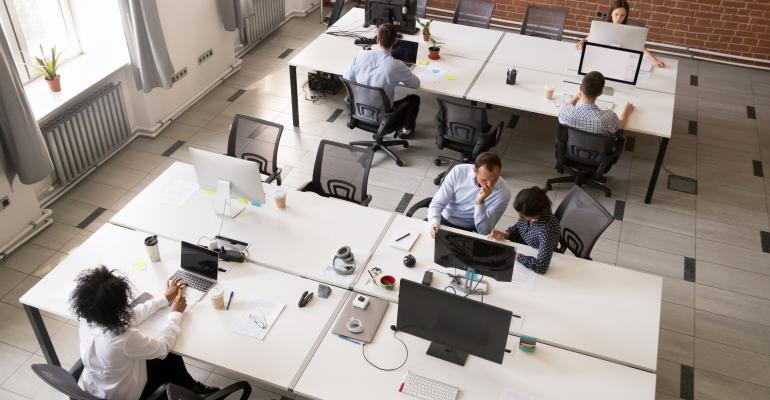 Will Co-working Operators Flourish or Fail in Tough Economic Times?

The resilience of co-working operators in an economic downturn or recession is debatable. On the one hand, office users could flock to flexible space options in times of uncertainty. At the same time, giving back marginal leased space is the easiest and quickest way to get rent relief in economically hard times, compared to office space with a traditional lease term, notes Scott Homa, senior vice president and director of U.S. office research with real estate services firm JLL.

“Most companies are tethered to lease obligations for six to 15 years, and to pay an early termination fee is cost-prohibitive,” he says. So, the idea that coworking space would flourish in a downturn is not born out by past experience.”

In a survey conducted by market intelligence firm Acuris Studios on behalf of global law firm Ropes & Gray LLP, 61 percent of participating lenders said they believed that co-working spaces would be less vulnerable in an economic downturn than traditional office space, and 73 percent of all respondents said an economic downturn would have a positive effect on the co-working sector. The survey included 100 senior executives from co-working operators, equity investors that fund co-working operators and/or coworking funds, traditional landlords, lenders and brokers. About 75 percent of respondents were based in U.S. and the rest were from the U.K. and Europe.

According to Homa, what’s likely to happen is that the co-working industry will see consolidation once there is structural weakness in the office sector. That’s not happening as of today. Average office vacancy dropped to 12.2 percent nationally in the second quarter of 2019, the lowest level in 18 years, according to data from real estate services firm CBRE. Asking rents rose by 5.1 percent to $34.28 per sq. ft.

But as co-working operators expand their global footprints and competition from landlords establishing their own flexible office brands heats up, consolidation is likely to occur, notes Homa. Approximately 67 percent of participants in the Acuris Studios survey also expect significant consolidation in the co-working industry through mergers and acquisitions over the next three years.

Not everyone agrees. While there may be some mergers between medium and large-scale operators, Mark Gilbreath, founder and CEO of LiquidSpace, says the flexible office market will likely grow more fragmented, with the rate of new operators entering the market exceeding the rate of consolidation. The barriers to entry for new space operators remain very low, he notes.

An economic downturn would likely put downward pressure on pricing as demand for space declines, but Gilbreath notes, “The durability of any business in hard economic times depends on the structural profitability of the business, how much cash is on hand and how long the downturn lasts.”

He suggests that this might be a big concern for WeWork landlords and investors, as The We Company, as it's now called, has prioritized growth over profitability. “If the company continues to execute a growth strategy, it will need to raise funding, but capital is unlikely to fund WeWork's hyper-growth strategy without a clear and believable path to profitability,” Gilbreath says.

WeWork pulled its planned IPO earlier this fall after it became clear it would not be able to achieve anywhere near its expected valuation.

“You can't paint all coworking operators with one brush,” Gilbreath notes, adding that many operators would survive an economic downtown because they have built their businesses on conservative practices.

“The introduction of flexibility and hospitality-style services—attributes that made co-working space successful—together have forced a shift in real estate to consumer-oriented, with buyers expectations reset by this model.”

He notes that office tenants now expect more flexible lease terms than in the past and a better quality product, which requires landlords to invest capital in bringing more amenities to their buildings.

According to Gilbreath, this is already being reflected in office landlords “upping the experience level in their buildings and going beyond by launching their own flexible office brands,” such as Studio by Tishman Speyer, Spaces+ by Washington REIT, Evolve by Granite, Boston Properties Flex by BXP and DurstReady by the Durst Organization.