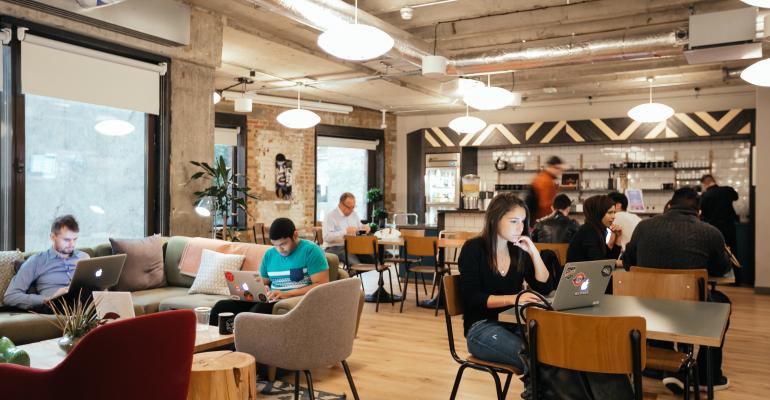 WeWork Is Weighing the Sale of Its Stake in the Wing

The Wing is a female-focused co-working start-up in which WeWork owns a minority stake.

(Bloomberg)—WeWork is exploring the sale of its minority stake in the Wing, a female-focused co-working startup, according to people familiar with the matter.

The Wing, both a WeWork competitor as well as one of its investments, is known for its mission of women’s empowerment, member events such as female-led film screenings and discussions with high-profile female leaders including Shonda Rhimes and Hillary Clinton.

Any transaction would come as WeWork seeks to shore up its financial position and prove to skeptical investors it’s on a path toward profitability. Talks are ongoing and there’s no certainty a deal will be reached, said one of the people, all of whom asked not to be identified because the talks are private. A representative for the Wing declined to comment, as did a representative for WeWork parent company We Co.

WeWork -- which isn’t involved in the management or day-to-day operations of the Wing -- owns about 23% of the company, which it valued at $58.8 million as of June 2019, according to its prospectus. That implies a valuation of $255.8 million for the Wing. In December 2018, the startup raised $75 million at a valuation closer to $400 million, according to a person with knowledge of the deal.

Not unlike its troubled investor WeWork, the Wing has been growing quickly. The company recorded triple-digit revenue and membership growth over the past year, according to a person familiar with the matter. Sequoia Capital led its most recent funding round, backing the company alongside investors that included actress Kerry Washington, former White House senior adviser Valerie Jarrett, U.S. women’s national soccer team players Alex Morgan and Megan Rapinoe, Airbnb Inc. and Upfront Ventures.

WeWork previously led a $32 million fundraising round in the Wing in 2017. Jen Berrent, WeWork’s co-president and chief legal officer, is a Wing board member.

The New York startup was co-founded in 2016 by Audrey Gelman and Lauren Kassan, and now has 10,000 members and eight locations across the U.S. in cities including New York, Los Angeles and Washington, with London and Toronto in the pipeline. In addition to offering basic co-working staples including desks, conference rooms, coffee and WiFi, the startup also provides female-friendly amenities like showers, beauty samples and babysitting in some locations.

Members -- who pay a minimum of $185 a month -- can also purchase feminist merchandise including socks that read “In Sisters We Trust,” key rings emblazoned with the motto “Girls doing whatever the f--- they want in 2019,” tote bags that read “League of Unusual Women” and lighters with the slogan “Light like a girl.”

WeWork on Monday formally put its initial public offering on pause after a tumultuous month that was marked by the resignation of co-founder Adam Neumann from the role of chief executive officer. The company has said it will refocus attention on its core business of renting office space, and has been exploring the sale of startups it acquired in recent years, including event organizing platform Meetup, office-management startup Managed by Q and marketing company Conductor. WeWork’s Gulfstream G650 jet is also said to be up for sale.

--With assistance from Liana Baker.