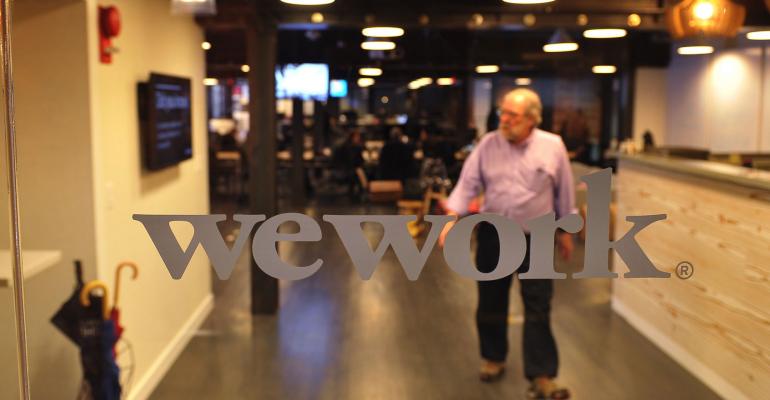 The next question after WeWork tried to resolve its governance issues is: does its business model make sense?

After the office-sharing company sidelined co-founder Adam Neumann to resolve governance and leadership issues, the next question is a more traditional one for prospective IPO investors: Does its business model make sense? It all depends on execution.

WeWork shook up the world of co-working spaces with more amenities and efforts to create communities for its tenants, who are frequently small groups or even individuals. Since its inception in 2010, the company has expanded at such a rapid pace that it’s become one of the biggest office tenants in places such as Manhattan and central London. At the same time, it was burning through cash, its path to profitability was unclear and it was committing to long-term leases that could blow up in an economic downturn, leaving landlords with wide swaths of empty space.

The model is “extraordinarily risky,” said Aswath Damodaran, a professor of finance at the Stern School of Business at New York University, who specializes in valuing enterprises. “If WeWork had been a mature company, you’d be less worried,” he said. But “this is a company where 80% to 85% of its value is based on what you think they can do in the future.”

For WeWork rival IWG Plc, the world’s largest operator of serviced offices, the business of offering customers short-term office space around the world has made Chief Executive Officer Mark Dixon a billionaire. Founded three decades ago as Regus, for much of IWG’s history, its spaces were pretty plain vanilla -- shared office equipment, someone to answer phones -- compared with WeWork’s flash, its kombucha on tap and other amenities.

Much of WeWork’s business revolves around signing long-term leases with landlords, fixing up the space and renting it out. IWG and other competitors responded with similar offerings, but found ways to mitigate the risks. IWG is pursuing franchise agreements that allow it to expand with less of its own capital at risk, while Industrious, a newer entrant, has shifted to management contracts with landlords instead of outright leases, splitting the profits. Companies like Knotel are focused on leasing space only to large corporate tenants, eschewing startups that tend to proliferate at WeWork locations.

“A fixed lease for co-working operators is a bit of a double edged sword: it’s great for operators in up markets, but pretty painful in down markets, whereas management agreements reduces some of the inherent volatility in a fixed-obligation structure,” said Danny Ismail, an analyst at Green Street Advisors. “By having these alternative structures compared to a traditional lease, it does reduce capital expenditures and makes it more asset-light.”

WeWork is also starting to pursue more management contracts. It’s also shifted its tenant base in the past year toward more corporate and enterprise clients. In these management agreements, landlords fund the buildout of spaces to WeWork’s specifications and maintain responsibility for them. WeWork then collects a fee for managing the office. WeWork generally forms a subsidiary to represent each lease deal, which means individual locations could fold without leaving the company itself with much risk.

New York-based Industrious, which was founded in 2013, is months away from profitability, according to CEO Jamie Hodari.

“We don’t sign leases, we sign management agreements with landlords and partner with them,” Hodari said. “If we spend any capital, it’s capital to build out new spaces, but there’s no operating losses or burn rate to cover.”

Investors across markets like Manhattan, London, San Francisco are among the most exposed to WeWork. Deals for two big London office buildings leased mostly to WeWork are on the ropes. Several large landlords and brokerages who invest in and lease space to WeWork declined to comment for the story. Other landlords with less exposure to WeWork aren’t too concerned.

Regardless of what happens with WeWork, co-working “is here to stay,” said Sylvain Fortier, chief investment and innovation officer at Ivanhoe Cambridge Inc., the real estate unit of one of Canada’s biggest pension funds. It has invested $1 billion alongside ARK, WeWork’s real estate investment and management arm, but isn’t an investor in the company.

“It’s been a disruptive business model for the industry; we want to understand it, and we want to participate in it,” Fortier said.

While WeWork is the dominant flexible-space operator in terms of size and growth in the U.S., adding nearly 11 million square feet to its portfolio since the second quarter of 2018, other rivals have also capitalized on the shift to flexible offices over the past decade, including IWG’s Spaces and Knotel, which each added more than 1 million square feet in the U.S. during that period, CBRE Group Inc. said.

In the U.S., flexible office supply jumped by 34% in the second quarter from a year earlier, but still accounts for just under 2% of the country’s total office inventory, according to a report by CBRE. The brokerage firm predicts that by 2030, flexible office space could account for 13% of the total U.S. office supply. It even launched its own business to help landlords create their own flexible offices last year.

Firms like Industrious and Knotel have attracted backing from large investors like Newmark Knight Frank and Wells Fargo Strategic Capital.

WeWork’s troubles may be severe but the co-working model is still viable if done right, said Michael Emory, CEO of Allied Properties REIT, which leases space to IWG in Canada. “These businesses need a more rational valuation, not a multi-billion dollar valuation that simply isn’t sustainable in the public markets under public scrutiny.”

To contact the reporters on this story: Natalie Wong in Toronto at [email protected];