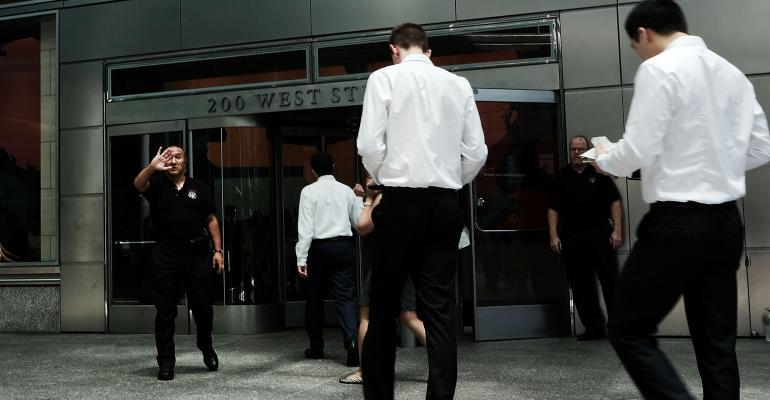 This same divide is expected to soon play out in other industries and cities across the U.S.

(Bloomberg) -- It’s a short stroll from Goldman Sachs Group Inc.’s global headquarters to Citigroup Inc.’s, but when it comes to reopening after the pandemic, the two Manhattan towers might as well be thousands of miles apart.

Starting this morning, Goldman Sachs is requiring almost all employees at its perch over the Hudson River to report to their desks, marking one of Wall Street’s most ambitious returns to the workplace since Covid-19 besieged the city more than a year ago. Meanwhile, Citigroup won’t recall more of its staff to its mostly empty Tribeca tower in downtown Manhattan until July. Even then, the firm has told most workers that they can adopt a so-called hybrid schedule between home and the office longer term.

Such divergences are popping up across Manhattan’s mighty financial industry, creating pockets of optimism within the city’s economy, but widespread anxiety inside workplaces. Bosses worry their teams will be less competitive if members are slow to come back. Parents fret about losing remote-work flexibility, but also that young, single colleagues and competitors may rush back sooner and soak up face time with executives or clients.

“Women are absolutely nervous about it,” said Rob Dicks, Accenture Plc’s talent and organization lead for capital markets. “I’m seeing the HR and business leaders at banks recognizing, understanding and starting to plan around fairness in evaluations.”

Still it’s hard to draw broad conclusions about whether such issues will take root in the industry, because no two Wall Street firms seem to be taking the same approach. The scene is similarly disjointed in London, where many banks are still hashing out plans.

A leading proponent of getting people back to the office quickly, as well as an amateur DJ, Goldman Chief Executive Officer David Solomon marked the end of his bank’s work-from-home era on Friday by releasing a new single titled “Learn to Love Me.” His bank, which has been ramping up in-person staffing for months, told employees who hadn’t yet returned that they had until Monday to figure out how they’re coming back.

Early this morning, employees high-fived and hugged each other as they streamed into Goldman’s Manhattan office in the drizzling rain. They’ll be greeted by free food in the cafeteria and an array of food trucks with music blaring all week.

Atop Citigroup, CEO Jane Fraser is still offering more flexibility to staff as vaccination campaigns continue, younger children await access to shots and some child-care options, such as summer camps, have yet to fully reopen. Her decisions on how to handle the process are among the biggest she’s made since ascending to the top job a few months ago. And as she starts to put her mark on the company, the situation may give her an early opportunity to differentiate Citigroup as an employer.

Among others moving quickly, JPMorgan Chase & Co. has already begun refilling its skyscraper on Madison Avenue while its true headquarters on Park Avenue is under construction. The nation’s largest bank has told all U.S. employees to prepare to return early next month, but the tower will still be capped at 50% occupancy.

Elsewhere in Midtown, senior managers at Bank of America Corp. have started making their way into the office. The firm isn’t expecting a broader return of staff until the fall.

“We’re concentrating on the vaccinated,” Bank of America CEO Brian Moynihan said today in an interview on CNBC. “But we’ve got to make sure the unvaccinated can come back in a mode that’s constructive.”

The bank recently started asking employees to disclose their status and now has tens of thousands in the U.S. who have received the shots. Those employees are being invited back and being given 30 days notice to return. Across the industry, many are eager to come back. Moynihan said he was at a wedding over the weekend and spoke with a “bunch of young kids” who work for competitors. “They’re tired of working out of their rooms.”

Deutsche Bank AG, also offering leeway, has told investment bankers in New York to plan on operating from offices no later than after Labor Day in September. Credit Suisse Group AG has told fully vaccinated employees in New York that they can begin returning on Monday as well, though all staff won’t resume full-time, in-office work until September.

“People will, by and large, return to the office,” said Alex Howard-Keyes, a vice president at the recruiting firm Kingsley Gate Partners who focuses on the financial services industry. “If you’re a big risk taker there will be pressure to get you back in the office full time. If you’re more client facing I suspect there will be a degree of latitude.”

This same divide is expected to soon play out in other industries and cities across the U.S. as companies from technology giants like Facebook Inc. to carmakers like General Motors Corp. have all promised workers more remote work in the future.

In New York City, where about 46% of residents were fully vaccinated as of Friday, the economy’s fate rests on Wall Street. The state has long estimated that 1-in-10 of the city’s jobs are directly or indirectly tied to the securities industry, which also accounts for one-fifth of private sector wages in New York.

Further behind the scenes, banks and their technology partners are crafting more fundamental long-term changes for how the industry will operate. They’re drawing on lessons executives learned when businesses across Manhattan suddenly had to work remotely. It turned out to be surprisingly doable.

Now, even banks eager to restock Manhattan towers are working on plans for shifting more of those jobs to other cities -- a concept getting dubbed the “distributed trading floor.”

Businesses that once had to be run from New York will increasingly be handled from states with lower costs of living such as Texas, North Carolina and Florida. A lot of tech talent prefers to live in those places anyway, said Likhit Wagle, general manager of global banking and financial markets at IBM Corp.

“A successful trader now needs to be somebody who’s very adept at taking advantage of artificial intelligence and machine learning,” Wagle said. “Those types of individuals are not available in London, New York or Frankfurt. They have strong views on work lifestyle balance, and a lot of them have indicated they’re not willing to move.”

For now, bankers are returning to offices that look vastly different than what they left behind March 2020.

Tall plastic barriers slice between desks while certain chairs in conference rooms have been blocked off to encourage social distancing. Common, too, are sanitizer stations. Masks may not be required for employees who are fully vaccinated, but daily health checks often will be.

“The things that used to drive building adoption — these are all at the bottom of the list,” Whelan said.

--With assistance from Sonali Basak and Steve Dickson.