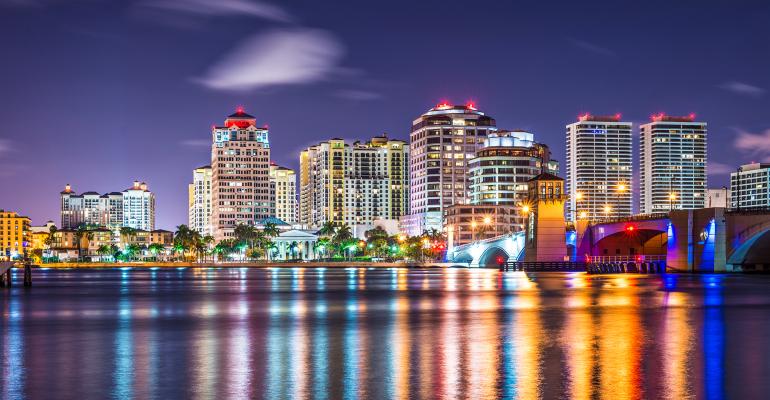 With the likes of Goldman Sachs and Point72 Asset Management opening outposts in the city, it’s becoming a hot CRE market.

(Bloomberg)—First came the pandemic migration of New York financiers to West Palm Beach. Now comes the investor rush for offices to accommodate them.

With the likes of Goldman Sachs Group Inc. and Steve Cohen’s Point72 Asset Management opening outposts in the Florida city, an area once known for snowbirds and retirees has suddenly become hot market for commercial real estate. At the forefront is Manhattan developer Related Cos., which has been accelerating investments in West Palm Beach and now controls about a third of its downtown office stock.

It’s a bet that even as Covid restrictions ebb and New York bankers are called back to their office towers, South Florida’s pandemic boom is here to stay. The region, with its relatively lax virus rules, no state income tax and comparatively cheaper homes, last year saw thousands of people flock to enclaves such as West Palm Beach -- a city that for now has just slightly more downtown office space than a single Empire State Building.

“The pandemic has really showed executives that they could do business anywhere,” said Kelly Smallridge, president of the Business Development Board of Palm Beach County. “Developers are at the drawing board right now to develop more space to accommodate all of this growth. We’re on fire.”

Related, responsible for prominent Manhattan developments such as Hudson Yards and the Columbus Circle tower now known as Deutsche Bank Center, has purchased three West Palm Beach buildings this year. It recently completed development of 360 Rosemary Square, an office tower that will house Point72 and is part of a broader project that includes shops and residences. The company plans to start construction soon on another complex, dubbed One Flagler.

With those projects, it will own 1.6 million square feet (149,000 square meters) of offices in the area, and most of the high-end Class A buildings. The two new developments will bring almost 20% more office supply to the market.

Elsewhere, New York-based Cohen Brothers Realty proposed a 400,000-square-foot office tower, according to brokerage CBRE Group Inc. Developer Jeff Greene also has a project under construction, One West Palm, that is slated for completion in 2022. The development will include the tallest towers in the area -- two 30-story buildings with a mix of hotels, luxury residences and offices.

Greene also started a private school in West Palm several years ago, and bought more properties around the lot for expansion. “The schools are filling up,” he said. “We have a waiting list in about five of the grades now and are at capacity.”

Related -- whose billionaire owner, Stephen Ross, owns the Miami Dolphins football team -- has been in the West Palm Beach for more than two decades and was already spending more than $600 million to develop Rosemary Square before the pandemic. The Covid migration added to the company’s bullishness and spurred it to buy additional buildings, said Gopal Rajegowda, a partner at Related Southeast.

“We feel West Palm is one of the fastest-growing commercial markets,” Rajegowda said. “With more people thinking about lifestyle now, a lot of these companies say, ‘hey, we want to be in South Florida, so why don’t we put a stake in the ground now?’”

About 59,000 people from the New York area spent at least eight weeks in southeast Florida last year, and 42% of those went to Palm Beach County, according to a report from mobility-data firm Unacast. The county gained 11,000 new residents during 2020, the most in the region, with $3.4 billion in new income, the report showed.

Florida has attracted firms including Elliott Management Corp., which is moving its headquarters to West Palm Beach and signed a lease at Related’s recently acquired Phillips Point tower. Izzy Englander’s Millennium Management is adding outposts in both West Palm Beach and Miami. Goldman Sachs plans to move part of its asset-management arm to the area and is near a lease deal at 360 Rosemary, Bloomberg reported last month.

That tower is more than 95% leased, compared with just 30% six months ago, according to Related. “It would normally take way longer to lease,” said Mark Pateman, managing principal with Cushman & Wakefield Plc’s West Palm Beach and Boca Raton offices.

Across the city, office-lease signings are reviving as people emerge from remote work. West Palm Beach had the most lease deals in the first quarter since the pandemic began, and more are likely to come this year as firms commit to space, according to Cushman & Wakefield. Pateman has been busy partnering with colleagues from the New York and tri-state area as more financial firms scope out space.

“I am seeing a lot of non-local brokers walking through our buildings dragging Florida brokers in tow,” he said.

All the enthusiasm raises the prospect of overexuberance in a market that still largely is home to satellite offices for bigger companies. While leasing has gone up, almost a quarter of office space in the West Palm Beach central business district was available for rent in the first quarter, according to CBRE Research.

“We’ve got a good run here, we have another two years of tailwinds from Covid, but is New York going away? Absolutely not,” said Pateman. “It’s overstated to say this is a paradigm shift.”

Related is preparing for a continued influx. The developer is starting construction on 360 luxury rental units in the neighborhood at a former Macy’s site, and has launched a concierge program for workers migrating south to help them find housing and schools in the region.

Smallridge, at the business development board, says she’s been working 15-hour days because of so much interest in Palm Beach County. Golf courses are completely booked with memberships, it’s harder to get reservations at restaurants and private schools are so crowded that some are considering expanding, she said.

“We’re reaching capacity for private schools, and now some executives are even looking at public schools,” Smallridge said. “I’ve done this 33 years and I’ve never seen this level of activity.”