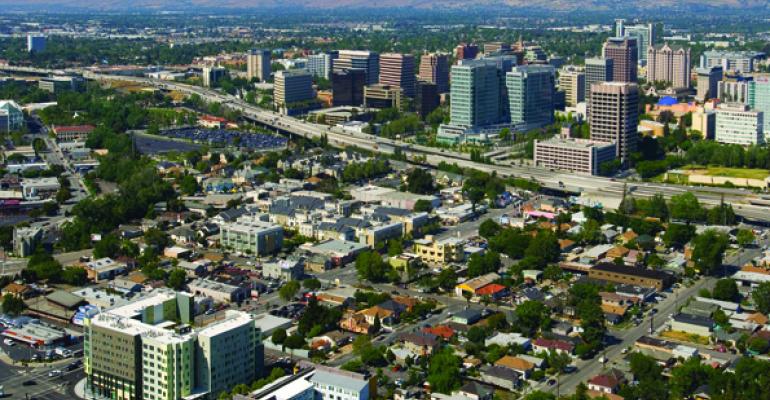 Thanks to a new tax break, Urban Catalyst became one of the most active office developers in San Jose.

(Bloomberg)—San Francisco’s towers and Silicon Valley’s sprawling tech campuses have long overshadowed downtown San Jose in the Bay Area. But developer Erik Hayden says the time has finally come for the city -- thanks, in part, to a Trump-era tax break meant to help low-income communities.

He and his partners at Urban Catalyst just unveiled their latest purchase in the city: a $24 million deal for a shuttered movie theater, which they plan to convert into an office development called Paseo.

In just a few months, Urban Catalyst has become one of the most-active developers in California’s third-largest city, laying out plans for apartments, offices, a Marriott-branded hotel and even a senior-living facility -- much of it just steps from where Google is planning a new campus for 20,000 workers.

And they have more coming as part of an effort to raise as much as $250 million to tap generous new federal subsidies for investing in areas designated as “opportunity zones.”

“We definitely would not have as much interest in San Jose, especially in downtown, were it not for the opportunity zone,” Hayden said. “It was crucial.”

That assertion is at the heart of a debate over one of the most controversial incentives in the tax package that President Donald Trump signed into law in late 2017: Would investment in opportunity zones have happened were it not for the tax breaks?

Critics of the program have pointed to zones in areas that were already up-and-coming to argue they’re a waste of tax dollars. Proponents, meanwhile, have highlighted investments that have come together faster, and bigger, because of the incentives. Teasing out who’s right may never be possible, said Nate Jensen, a professor of government at the University of Texas at Austin, who studies economic development incentives.

“The bottom line is we are not going to be able to evaluate this, even if we had all the project-level data,” he said.

San Jose makes for an interesting case study. Long a bedroom community for Silicon Valley, the city has been trying to flip the script by bringing jobs and businesses downtown to bolster its tax base. Transit upgrades years in the making are moving forward. Roughly three years ago, Google began snapping up properties for its eventual campus.

It’s all had the effect of spurring projects. In the coming decade, developers may deliver nearly 14 million square feet of office space in city’s central business district, according to CBRE Group Inc. That doesn’t count the as much as 7.3 million square feet Google is planning.

Construction costs remain high, so the opportunity zone benefits are “without question” important for some new developments, said Erik Hallgrimson, a broker with Cushman & Wakefield in San Jose.

The real estate boom has provoked a backlash, with many residents worried that the arrival of thousands of tech workers will put housing out of reach in one of the more affordable parts of the Bay Area. Median home prices in the city almost touched $1.2 million in the spring of 2018, before moderating. They were $938,000 in October, according to Redfin Corp.

Hayden estimated his developments will contribute about $25 million toward affordable housing, enough to create more than 120 below-market units. Urban Catalyst’s projects will also add $100 million to local coffers in property taxes through 2030, he said, more than the tax breaks his investors will likely reap because of the opportunity-zone benefits.

Hayden’s fund has also allowed investors who’ve made money in tech to parlay some of their capital gains into redeveloping San Jose -- something they might not have done absent the tax benefits. Almost half of the more than $42 million Urban Catalyst has raised to date has come from the sale of stock, including from executives at Apple Inc. and Facebook Inc.

“This is the whole impetus of the program -- get money off the sidelines and invest in lower-income areas,” he said.