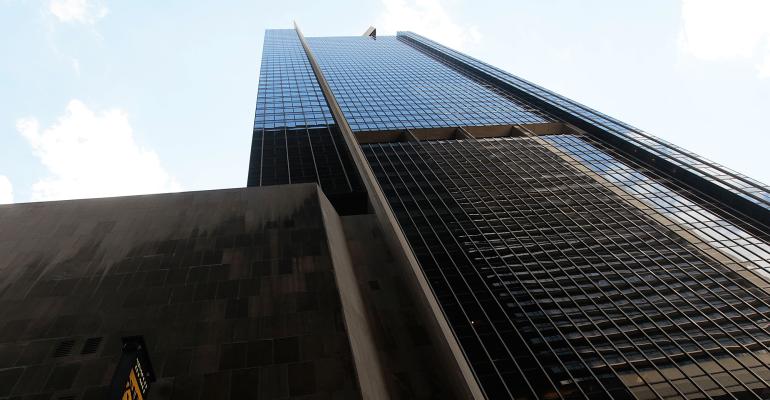 The Manhattan-based landlord on Monday revealed further details of its casino bid, which includes partnerships with Caesars Entertainment Inc. and Roc Nation, the entertainment agency founded by Jay-Z.

(Bloomberg)—SL Green Realty Corp. aims to redevelop a Times Square office building into the tallest tower in the area as it competes for one of New York State’s casino licenses.

The Manhattan-based landlord on Monday revealed further details of its casino bid, which includes partnerships with Caesars Entertainment Inc. and Roc Nation, the entertainment agency founded by Jay-Z.

SL Green has proposed a theater to anchor the main floor of the building, at 1515 Broadway, and a boutique gaming venue above. The tower will have the world’s largest combination of three-dimensional advertising signs and include a five-star hotel, SL Green’s managing director Brett Herschenfeld said at the company’s yearly investor conference. The project also will make the building the tallest in the Times Square “bow tie” — the blocks surrounding the point where Broadway and Seventh Avenue cross, he said.

“There's no better location in New York State for a mixed-use casino than Times Square,” Herschenfeld said. “It’s the world's top tourist attraction, and our casino will generate over 7 million net new visitors.”

The real estate investment trust announced its initial plans in October, joining other developers and casino operators also vying for three gaming licenses for New York’s downstate region. Hudson Yards developer Related Cos., in partnership with Wynn Resorts Ltd., and Stefan Soloviev, the billionaire owner of 9 W. 57th St., are among those who’ve also said they intend to apply for licenses.

Read more about Soloviev’s plan to build a casino near the United Nations.

SL Green also said it will explore office-to-residential conversion opportunities in the city, a strategy that’s gaining popularity with landlords at a time when many older workspaces have large vacancies and demand for housing remains high. The company said it’s marketing several buildings in Midtown that it thinks could be good candidates for conversion, including 625 Madison Ave. and 2 Herald Square.

“We're in the market now with several additional assets where we believe change of use could be viable,” SL Green President Andrew Mathias said. “Change of use is a dominant theme in the market today as the city grapples with unprecedented vacancy.”

Earlier Monday, SL Green cut its annual dividend by 13%, based on its expectation for 2023 funds available for distribution. The move “signals the magnitude  of a potential earnings decline for next year,” Bloomberg Intelligence analyst Jeffrey Langbaum said in a report.

To contact the author of this story: Natalie Wong in New York at [email protected]