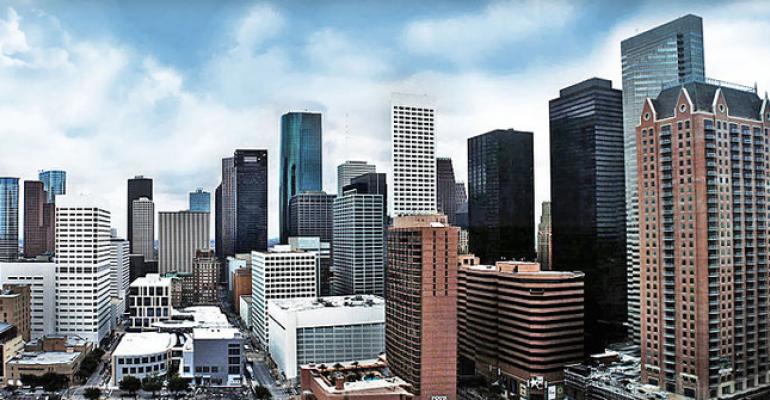 Almost 60 million sq. ft. of office space is sitting empty in the city.

(Bloomberg)—Houston is counting on industries outside the oilfield to employ residents of America’s fourth-largest city as the Texas shale boom sputters.

“The situation Houston faces today is eerily similar to what it faced after the 1980s bust -- an oversaturated real estate market, a bleak outlook for oil and gas, and the need for innovation to drive the economy forward,” the Greater Houston Partnership said in a report Thursday.

The civic group forecasts 4,000 oilfield jobs will disappear by the end of next year. Although the Permian Basin and Eagle Ford Shale regions are hundreds of miles away, Houston is the locus of corporate and finance operations that direct and support the drilling. Cutbacks are expanding to investment banks and trucking firms as investors increase pressure on explorers to tighten budgets.

Almost 60 million square feet of office space is empty, a vacancy rate of more than 26%, according to the report.

“A healthy rate would be in the mid-teens or lower,” said Patrick Jankowski, senior vice president of research at the group.

Chemical plants and refineries have offered a beacon of hope to the manufacturing sector. Those facilities, located mostly in the city’s eastern suburbs, have added about 5,000 jobs in the last five years. Another $40 billion in new petrochemical facilities are on the drawing board for Texas and Louisiana, according to data compiled by Bloomberg.

One bright spot for Houston’s economic outlook is the health care industry. The city’s Texas Medical Center, which bills itself as the world’s largest medical complex, is a mecca for cutting-edge cancer treatments and other disciplines. The complex south of the downtown financial district treats about 10 million patients annually.

The sector is expected to add 7,900 jobs by the end of 2020, the report said, more than offsetting losses in energy.

Efforts to reinvent Houston’s economy comes as City Hall is “struggling with legacy retirement and debt costs,” said Eric Kazatsky, an analyst at Bloomberg Intelligence. Houston’s municipal government derives 30% of its revenue from sales taxes, so “the need to diversify the economy and keep consumers spending is vital.”

Houston is rated Aa3 by Moody’s Investors Service and AA by S&P Global Inc. A general obligation bond sold by the city in 2016 and due in 2023 changed hands at a 1.27% average yield, or 19 basis points higher than AAA rated debt, according to trade data.

To contact the reporter on this story: Rachel Adams-Heard in Houston at [email protected]

To contact the editors responsible for this story: Simon Casey at [email protected]