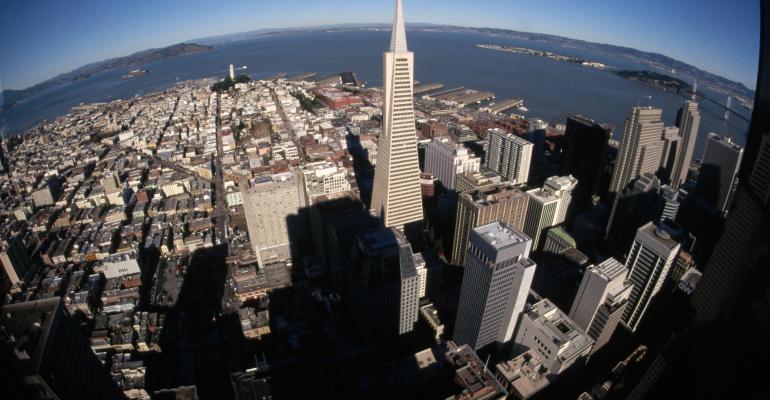 A group led by developer Michael Shvo has made a deal to purchase the Transamerica Pyramid building for about $700 million.

(Bloomberg)—The Transamerica Pyramid, the iconic skyscraper that has defined the San Francisco skyline for almost half a century, is poised to change hands for the first time.

A group led by New York developer Michael Shvo has a deal to purchase the building, according to people with knowledge of the matter, who asked not to be identified discussing the private transaction. The price is about $700 million, one of the people said.

Transamerica marketed a 49% stake in the building in 2018 but was stymied by European accounting standards that turned off potential buyers. Last year, citing San Francisco’s “very robust” office market, the insurer said it would pursue an outright sale, as long as it could retain the naming and branding rights.

For Shvo, it’s another landmark property to add to his portfolio. In the last year, Shvo and his partners have acquired buildings valued at more than $3 billion, including the Coca-Cola building in Manhattan. While his focus has been on high-end residential properties, some of the recent transactions have helped him expand into offices.

While the Transamerica pyramid is now beloved -- featured in everything from Hollywood blockbusters to postcards -- it wasn’t as well-received when it opened in 1972. San Francisco’s top urban planner at the time called the structure “inhumane.” At 853 feet, it contributed to a backlash against tall buildings that resulted in a voter-approved measure that limits office construction in the city to this day.

In recent years, that constraint has been blamed for severely crimping supply and driving up office rents. Technology companies now lease entire new towers well before they’re completed, to ensure they have space for their growing ranks of employees. The cutthroat market is also pushing out tenants that can’t afford the city’s sky-high rents.

Still, selling the pyramid presented a challenge. It’s located at the northern end of the financial district, slightly outside an area that’s popular with tech companies. The building’s unique architecture means that higher floors with the best views have smaller floor plates.

It also looks dated compared with the boxy, glass offices that have come to dominate the city’s skyline in recent years. One of those buildings -- the Salesforce Tower -- was completed in 2018 and eclipsed the pyramid to become the city’s tallest skyscraper.

Transamerica hasn’t occupied its namesake building for several years, but the pyramid is still part of the insurer’s logo. Tenants include Greenhill & Co., JMP Securities and Northwestern Mutual.