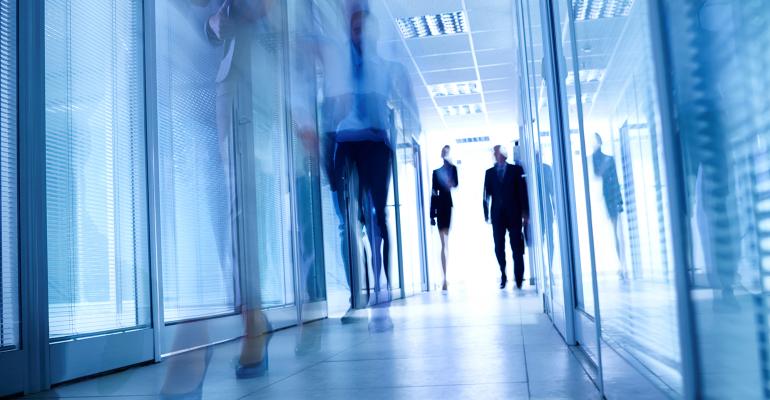 Real Estate Firms Navigate Their Own Return to Office Dilemmas

Shifted return timelines, hybrid work policies and vaccine mandates are all part of the picture as real estate companies set rules for their own employees.

The current spike caused by the Delta variant has thrown a wrench into many firms’ return to office plans. Companies, including Apple and Google, that had slated full scale returns to office this fall have been forced to readjust those timelines, with some now delaying until 2022. What’s more, the FDA’s recent approval of the Pfizer vaccine has led many firms to implement vaccine mandates for employees.

In the current wave, daily cases are back above 150,000 and deaths have risen to more than 1,100 per day, according to latest figures from The New York Times. The spike has been especially acute in Southern states like Texas, Florida, Mississippi and Louisiana. It’s gotten so bad that Florida’s current wave has now reached daily case and death counts surpassing its previous peak and yet many of those states’ governors have banned policies (such as mask mandates) that could help stem the tide.

The real estate industry is smack dab in the center of these rapid shifts in the pandemic terrain. As landlords and investors, real estate companies have felt the effects of their tenants’ decisions. But companies are occupiers themselves and are continuing to assess their own remote work policies, return-to-office timelines and vaccine mandates.

In two notable examples, New York City-based Related Companies implemented a vaccine mandate for its employees earlier this month. Similarly, the Durst Organization said its non-union workers that remained unvaccinated by Labor Day would be fired.

Meanwhile, large real estate services firms including CBRE and JLL and others have also tried to pave the way in setting return-to-office policies.

“We had planned to have our corporate team members return to their offices after Labor Day this year,” says Patrick Appleby, president of WinnResidential, a real estate firm based in Boston. “With the new threat posed by the Delta variant, we have now pushed that date into early October 2021.”

Overall, the number of office workers showing up in person is less than a third (31.3 percent) of what it was before the pandemic, according to an analysis of workers entering buildings in 10 cities by Kastle Systems, based in Falls Church, Va. Kastle creates lobby security systems used in thousands of office buildings. That’s 19.2 percent in San Francisco, 22.9 percent in New York City and 28.2 percent in Los Angeles. More workers are showing up in person in Texas cities like Austin (45.9 percent), Dallas (46.0 percent) and Houston (46.8 percent), according to Kastle.

The corporate offices of many real estate firms have been partly open since the pandemic began in March 2020.

"We never formally closed our corporate offices because our company is considered part of the nation’s critical infrastructure," says Appleby. "All our team members are essential employees."

But at the same time, many companies like Winn never fully reopened its office either. Instead some of Winn’s workers come in to work at their desks a few days a week. Others work entirely from home. Supervisors establish staggered arrival times in cases where there are personal circumstances involving family or health needs.

“About 30 percent of our employees are in our corporate offices on any given day,” says Appleby. “We are encouraging people to work three days in the office and two days at home.”

Winn manages more than 600 apartment properties across the U.S., including many locations considered to be hot spots for coronavirus infections. “Our work health practices always default to most conservative restrictions in place for the local, county or state market where an apartment community is located," says Appleby.

A few real estate companies have asked more of their employees to return to the office—especially once vaccines against the coronavirus became widely available.

"All of our corporate teams have been back in the physical office since April of this year," says Yvette Stewart, senior vice president of property management for Post Brothers Apartments, based in Philadelphia.

Post's workers returned to its offices and construction without any rise in infection rates among its employees and subcontractors, says Stewart.

To fight the spread of the virus, Post employed a long list of safety procedures along with cleaning and social distancing protocols. Post also encouraged its employees to get vaccinated.  “We established a lottery for our employees to incentivize vaccinations and we reimbursed some of our key subcontractors for bonuses to get the vaccine as well,” says Stewart. “We also paid for leave and hotels for those who became exposed, in order to reduce the risk to their families and co-workers.”

Philadelphia city officials asked Post to conduct webinars for other industry groups and builders in the city to share its model for safety. "Many of our recommendations were then actually imposed as requirements by the City for other contractors to re-mobilize on their own construction sites."

Post also “decentralizing operations” by creating “pocket” offices on construction job sites — which allow for onsite collaboration and improved quality reviews of the construction process. “We have actually seen a positive impact on quality and reaction time to issues, and even faster design decisions and product improvements,” says Stewart.