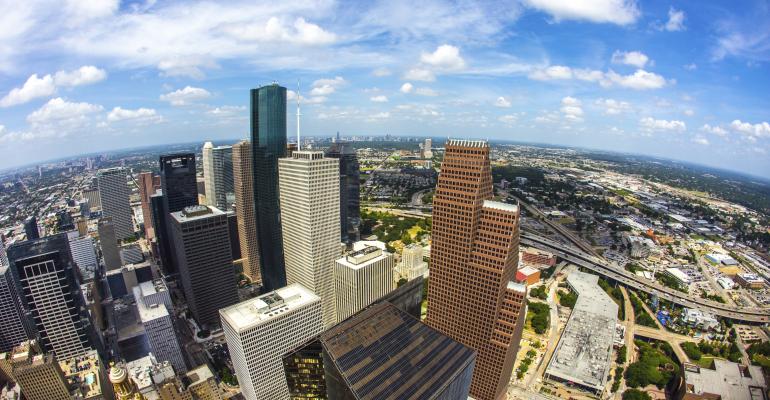 In addition to the economic impacts of the pandemic, they are being battered by the current oil production wars.

While the U.S. government is trying to shore up businesses and help laid-off workers affected by widespread quarantines, office markets exposed to energy-related tenants, including Houston, Oklahoma, Denver, and New Orleans, are bracing for a double whammy, as a global oil price war slows U.S. production. About 30,000 job layoffs are expected in Houston alone, according to Houston-based Tyler Garrett, senior vice president specializing in office leasing with real estate services firm Transwestern.

While the ongoing COVID-19 pandemic is the most disruptive force in the global economy, the oil price war precipated by tensions between Russia and Saudi Arabia over market share is having knock-on effects for the U.S. market. Oil prices have dropped by 50 percent since Saudi Arabia and Russia began flooding the market a few weeks ago. This, in turn, has precipitated a tightening of bank lending, reduced investor appetite and has made an energy sector default a strong possibility.

A CoStar report by Nancy Muscatello, managing consultant with CoStar Advisory Services in Boston, notes that CBD office vacancy in Denver’s office vacancy in the CBD submarket, averaged 13. 4 percent at the end of the fourth quarter of 2019, 3 percentage points above the metro’s average. Other energy-focused markets, including Oklahoma City and New Orleans, have not fully recovered from the last oil downturn, with above average office vacancies or stagnant demand, according to the CoStar report.

But Houston is the epicenter of the U.S. oil industry, with about 237,000 jobs related to the oil and gas industry, or 40 percent of the region’s total job market. The 30,000 jobs expected to be lost are those that returned following the oil price crash of 2014-2017 when 94,000 energy workers were laid off, as Texas oil producers shut down 80 percent of their 1,000 rigs at the same time, Garrett notes. Garrett expects producers to shut down about half of the 500 rigs currently operating across the state.

Global demand for oil was already declining in 2020 when negotiations on product limits between OPEC and Russia following the coronavirus outbreak fell through. This resulted in a price war that caused oil prices to tumble from $60 per barrel at the beginning of the year to $30 per barrel by mid-March, notes Muscatello.

While the impact on Houston’s office market has not yet materialized, Paul Leonard, also a managing consultant at the CoStar Advisory Services Group in Boston, notes that Houston’s office vacancy rate is already the highest of any major city nationally at over 16 percent for the last four quarters, compared to 9.6 percent nationally.

Noting that energy firms occupy roughly 25 percent of Houston’s total office inventory of nearly 235 million sq. ft., Garrett says that Transwestern has been tracking office vacancy at 15.2 percent, but when sublet space is added in, the availability is at about 25 percent, and he expects that figure to rise sharply, as falling oil prices begin impacting companies involved both directly and indirectly in the energy industry.

At the peak of the last oil price drop, available sublet space rose to 12 million sq. ft., and Garrett expects a similar amount of sublet space to become available. The pandemic is likely to accelerate the impact of oil and gas prices on energy companies, he notes, potentially causing them to file for bankruptcy or lay off workers sooner rather than later.

“Sublease space added in this wave is likely to be of lower credit quality and shorter term than that of previous waves,” Garrett adds.  “As such, it should be less competitive for new market requirements.”

Houston in used to wild fluctuations in energy prices, but the current situation is pretty dramatic, notes R. Bryon Carlock, national real estate leader at consulting firm PWC. “We haven’t seen anything like this since the drop in oil prices and savings and loan crisis in the 1980s happened at the same time.”

The industry has $155 billion of high-yield debt trading at distressed levels, and that doesn’t include debt portfolios held by banks, he adds.

Garrett agrees that difficult times are ahead. “The Houston office market should prepare for a rough period for the next 12 to 24 months,” he notes, suggesting that oil field workers in places like Midland, Texas are likely to bare the brunt of dropping oil prices first, as producers shut down rigs.

Investors in the office sector are likely to avoid energy-exposed markets in the near term, according to Muscatello. She suggests that the silver lining for Houston is the fact that new office construction has been very low over the last several years, due to its weakened position from the last oil price downturn. About 20 million sq. ft.—over 5 percent of the city’s total inventory—was underway in 2014, while today just over 5 million square feet, or 1.6 percent of existing inventory, is under construction.

Houston’s economy and office market have been on a different path than the rest of the nation since the last oil price decline, according to Leonard. Houston recovered quickly from the Great Recession, causing developers to push forward on dozens of office projects, mostly occupied by energy sector tenants. But when oil prices peaked in 2014 and then dropped sharply, office construction slowed, he says.