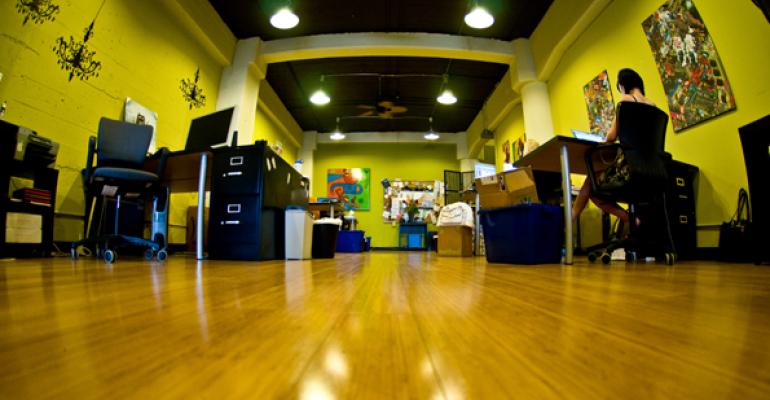 Office landlords are creating their own flexible office space divisions.

An advantage office building owners may have over co-working operators is the ability to offer spaces of any size as a flex office offering, while co-working operators are typically limited by the size of the space leased, says Deborah Boyer, director of innovation and impact at The SWIG Company. She notes that while SWIG, a privately-held office investment firm with assets primarily in Northern and Southern California and Midtown Manhattan, has co-working tenants in its buildings, the firm wanted to also offer tenants a flex office alternative with the opportunity to incorporate their own brand and culture into the design.

Office building owners have the option to expand the amount of co-working space they offer depending on the level of demand, according to Thais Galli, managing director at Tishman-Speyer. When Studio’s Manhattan location leased up, for example, the company expanded is space from one to multiple floors, she notes.

Likewise, Anthony Chang, vice president, asset management at WashREIT, says, “We looked at multiple options and experimented with different concepts. Considering that our average, mid-size tenant occupies about 4,600 square feet, we saw a great opportunity to capture tenants graduating out of co-working space. People want to put their own brand first, which is important in recruiting talent.”

Due to the REIT’s geographic concentration in the D.C. area, Space+ is attracting government contractors and lobbyists and media companies that bulk up around election cycles, and so cannot commit to space long-term, Chang says.

Tishman-Speyer views demand for flexible office space as a shift in the marketplace that is here to stay, according to Galli “Tenants are looking at real estate differently than in the past,” she says.

Designing a quality, plug-and-play space that could turn over frequently has been the biggest challenge faced in establishing flexible office platforms, according to Chang and Boyer. Noting that SWIG has engaged Australian design firm BVN to design flexible workspaces, Boyer comments that, “We are not doing a cookie-cutter design at every building, because we don’t believe culture comes in a box.”

Similarly, each Studio co-working space is unique to the site and location, according to Galli.  While the firm’s co-working space design is Studio-branded in common areas, tenants can add their own branding touches in the spaces they occupy.

Traditionally, office building owners have eight to 10 years to amortize the cost of build-outs, according to Boyer. But with flexible office space, there’s no guarantee that the next tenant will want any of the existing tenant’s design elements. “What is difficult is finding the right recipe that works for new tenants after the space turns,” she adds, suggesting that all landlords are wrestling with this issue.

Another over-arching challenge, according to Boyer, is ability to offer tenants immediate occupancy. She notes that there is a need for innovation in construction: “It takes too long and costs too much to build out space for flexible tenants.” Galli says that Studio co-working spaces offer next-day occupancy, as leases and payments are all done digitally, but Studio Private spaces require four to five months for build-outs.

To speed delivery and design flexibility, all three landlords use modular office elements to build out tenant spaces, as they can be reconfigured for new tenants and offer the ability to expand or contract space according to changing needs.

The WashREIT team experimented for three to four years before figuring out the skills that would be required—including technology, best practices and direct marketing—to make its flexible space division work, according to Chang.

Executives from all three companies say they offer lease terms as short as one month for co-working space and under 12 months for flexible office platforms. They noted, however, that tenants going in on short-term leases tend to renew for longer periods; in the case of SWIG and Tishman-Speyer, on average 18 to 24 months, and for WashREIT 5.2 years.

Longer-term leases provide greater rent discounts, according to Galli, so tenants might enter the space on a temporary basis, but if they like the experience, will sign up for longer terms to take advantage of discounts. She notes that co-working space does command a significant rent premium over traditional office space, but when tenants consider all the amenities and services offered, they do the math and realize that they couldn’t provide the same experience for less.

Depending on the extent of the required build-out and the lease term, Boyer says that SWIG’s co-working spaces could range from no premium to double the cost of traditional space at the company’s properties.

All three companies provide amenities and services comparable with co-working operators like WeWork and some go beyond, depending on the building and location. While SWIG doesn’t provide free beer on tap, it has common amenities shared by all building occupants, including free access to conference and meeting rooms and auditoriums in some buildings to accommodate large events. In addition, there are fitness centers; comfortable lounge areas for relaxing and connecting with other building occupants; and outdoor spaces that provide optional work areas, which may be connected to a café or coffee bar.

In designing flexible office space, Chang says, “We did a deep-dive study of tenants—what tenants in our ‘sweet spot’ want and took the best of what co-working spaces offer.”

For its part, depending on location, Tishman-Speyer’s Studio also provides mediation rooms; nap pods; an in-house barista that converts to a bar after 5 pm, as well as shared common areas like a tenant lounge, quiet areas and access to fully-equipped, on-site gyms.

All tenants are provided with ZO., a concierge app that enables them to find nearby services, including daycare, dog walkers, doctors and manicurists and hairdressers, among others.