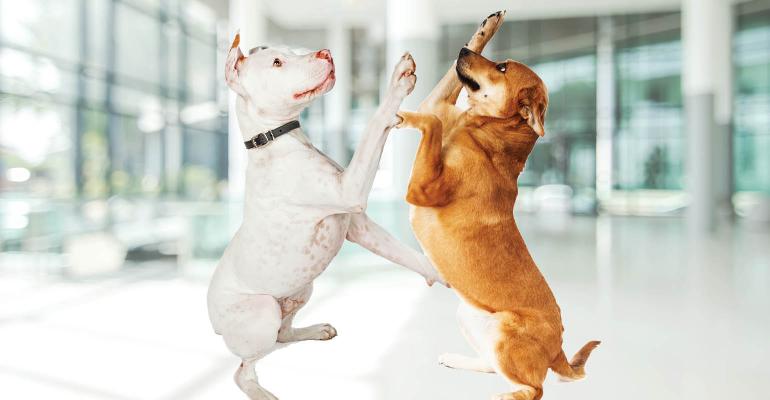 Office landlords struggling with high vacancies can consider a myriad of new uses, from warehouses to restaurants to schools.

Older office buildings with high vacancies often suffer from lack of access to mass transportation or require significant infusions of capital to compete for tenants in today’s market. Landlords struggling with low occupancy may want to consider converting older office buildings to uses with higher demand for the location, including housing, hotels, schools, retail, start-up incubators, industrial facilities or even urban gardens.

For example, Fairfax County, Va. was struggling with 18 million sq. ft. of unoccupied office space. A local planning workgroup looked at the opportunities for recycling old office buildings into apartments, schools, co-working spaces and food incubators and recommended zoning changes that did not require changes to land use plans. In 2015, the county’s Board of Supervisors approved the recommendations, but with the caveat that the buildings be in an area zoned for mixed uses or industrial.

Since then, the county has seen old office buildings converted to schools, live-work units and apartments, with more adaptive reuse projects in the works.

A five-story, 99,350-sq.-ft. office building located across the street from Seven Corners shopping center in Falls Church, Va. was acquired by the local school district for $9.37 million, or about $94 per sq. ft.  The building was redesigned by Lauren Perry Ford, an architect at Cooper Carry, to house Bailey’s Upper Elementary School for the Arts and Sciences, which now serves 764 students.

Meanwhile, in Springfield, Va., Immanuel Christian School, a private school offering classes from kindergarten through eighth grade, plans to expand its curriculum to high school at a nearby office building in Alexandria, Va. The school leased 27,000 sq. ft. of former office space to convert to classrooms and administrative offices by the upcoming fall quarter. It has plans to acquire the entire building.

In Falls Church, Va., a 10-story, 173,000-sq.-ft. office building that had been empty for about four years was converted to rental housing, which is in high demand in the area, according to Sophia Fisher, a senior planner in the Fairfax County Planning Department. The project by local developer Cafritz Interests, which specializes in adaptive reuse, completed the conversion of the office space to 200 live-work units known as e-lofts Alexandria in 2016.

Cooper Carry architect Steve Smith notes that building urban schools, especially high schools, is challenging for school districts, since they typically require 30 to 40 acres for sports and other activities. It can be difficult to assemble that much land in an urban environment. His firm redesigned a 56-acre IBM campus, with an 11-story, 507,093-sq.h-ft. office tower in Atlanta, as North Atlanta High School. That project, which also features a scenic lake, assembly building and 942-car parking deck, also converted existing, on-grade parking lots into athletic venues for baseball, softball, football, tennis and track.

Smith recently redesigned a 13-story, 625,000-sq.-ft. office building in Old Town Alexandria, initially built in 1970, into a multifamily mixed-use property. The project, by local developer Perseus TDC | Real Estate Investment & Development, is currently under construction and will include 520 apartment units; 34,000 sq. ft. of retail space; and a variety of amenities to appeal to young professionals, including a rooftop pool and indoor dog run.

There are costly challenges to recycling obsolete buildings to other uses, according to Smith, but also tremendous advantages over new construction, including quicker delivery to market than ground-up development, typically with significant savings over projects started from scratch. There is also often a design advantage in the case of historic buildings, which often have unique design elements.

In the case of the Alexandria office building at 200 Stovall, which was rebranded The Foundry, Smith says, “The building has good bones, great views and was in an excellent, walkable location nearby a Metro station. But its life as an office building was over,” he adds, noting that low ceilings and no parking made it unmarketable as office space.

Converting the building to residential use, however, presented design and structural challenges and hidden issues in walls. The structure is oversized for residential at 120 ft. by 378 ft. and was designed on a 20 by 20 grid with lots of internal columns, making it difficult to break into apartment units. It also had asbestos that had to be removed and contained wiring and plumbing inconsistent with residential use.

The building’s extra width was overcome by creating large balconies that are recessed under the roof into units. Unneeded elevators were removed and their shafts filled with amenity and storage spaces.

The first two levels were combined to provide higher ceiling height for retail space, and three levels of parking were added on top of the building. Other structural modifications were required to meet today’s building codes and strengthen support for the three parking levels and ramps.

This included the introduction of sheer walls to separate units from balconies and an extra rebar and an additional slab with insulation in between were added to the existing slab on parking levels.

The costs for adaptive reuse projects can be estimated fairly accurately, Smith says, but developers/investors need to leave wiggle room in proformas for unexpected contingencies.

Meanwhile, while historic buildings are generally well built, Smith says that developers/investors should expect at the very least to replace electrical and plumbing systems to meet code requirements.

Rezoning may also be required, depending on the building’s location.

No matter what the new use is, these types of buildings can be acquired for significantly less than replacement cost due to a dip in their marketable lease rate or abandonment, according to Schroeder.

Schroeder also suggests that old office buildings can be good candidates for various retail services, noting that a Minneapolis developer recently converted an office building into a doggy hotel.

Class-B and -C office space is also being converted to industrial use to meet high demand for “last mile” industrial facilities in urban centers, according to Pete Quinn, Indianapolis-based national director of industrial services, USA, with real estate services firm Colliers International. While this would have been considered a ridiculous proposition 10 years ago, he says that office landlords dealing with falling occupancy rates are increasingly undertaking such conversions.

The rise of co-living, another sharing economy concept, offers additional opportunities for investors, especially in cities in the throes of a housing crisis that forces young adults and retirees out of the housing market. For example, The Collective, a London start-up, converted an old office building in London into the largest co-living building in the world, The Collective Old Oak, which provides 550 beds.