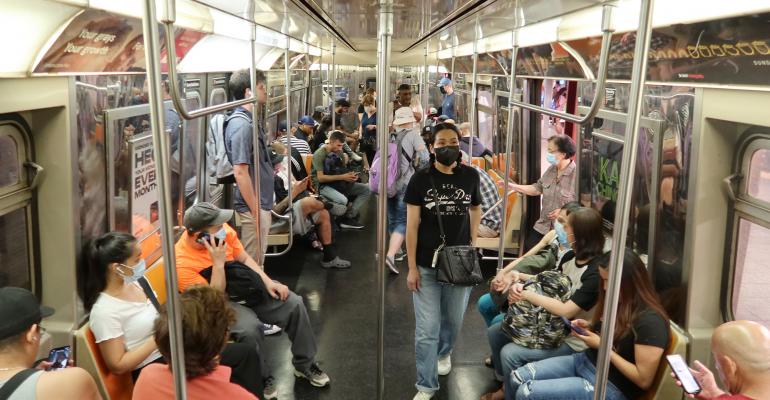 NYC Subway Use Is Rebounding Faster on Weekends Than Weekdays

(Bloomberg)—It’s rare for Sonah Lee-Lassiter to ride the subway on a Tuesday these days, but the Brooklyn resident recently took the train to Manhattan for a doctor’s appointment. Now that she works remotely, she’s a weekend commuter who rides the train to the beach or to meet up with friends in other boroughs.

Lee-Lassiter, 35, is part of a larger puzzle the Metropolitan Transportation Authority is grappling with: Fewer New Yorkers are taking the train to get to their jobs on weekdays. Instead, they’re riding the subway on weekends to visit a museum, go to a bar or head to a hike upstate.

The largest US mass-transit provider has struggled to boost ridership as many office workers have settled into working from home, depriving the MTA of what once was a crucial source of revenue -- millions of weekday commuters. On Monday of this week, about 2.7 million people rode the New York City subway, about half of the ridership on a comparable day before the pandemic, according to agency data.

The MTA may not regain 100% of pre-pandemic crowds across its entire system until about 2035, according to a senior agency official. Yet, ridership on the weekend for the subway is around 70% of pre-pandemic levels, while weekday usage is about 60%, as concerns over crime and coronavirus still suppress public transit across the board.

“I work fully remote right now, and my husband and I end up taking the trains more on weekends,” Lee-Lassiter said. “We will take it to go to the gym, go down to the beach, Brighton Beach, travel to different parts of the city to meet up with friends to do something social.”

Organizations are grappling with how to bring workers into the office when Covid variants continue to emerge and employees are reluctant to give up remote work. Only 38% of workers were at their desks in New York City in the last 10 days of April, according to a survey conducted by the The Partnership for New York City, a business-backed group that promotes economic growth in the region. And the MTA itself has provided incentives to riders to use the system more often by offering commuters free rides, and the chance to win free meals and hotel stays.

Across the Hudson River, weekend commuting is even stronger. New Jersey Transit’s average ridership on weekends is about 80% to 90% of pre-pandemic levels, with some trains at 100% of 2019 levels, while weekday transit is at about 55%. The Port Authority of New York and New Jersey’s PATH trains’ weekend ridership is also between 80% to 90% of pre-pandemic levels, whereas weekday traffic is roughly 50%.

“Weekday ridership is so suppressed in large part because people have fewer places to go,” said Danny Pearlstein, a spokesman for Riders Alliance, a transportation advocacy group. “People still want to really connect with friends and family and enjoy the city and the region in their spare time and on the weekend.”

The MTA is looking to improve weekend subway service while it performs maintenance and construction work during those days. The transit agency will appoint a weekend service czar in the next few weeks to plan, coordinate and implement subway service, Richard Davey, the MTA’s subway and bus chief, said during a committee meeting on July 25.

Weekends were historically used to do maintenance and upkeep work that can’t happen during rush hour times, but now the service disruptions are inconveniencing some of the most crucial riders, Pearlstein said.

The trend isn’t limited to the New York metropolitan area. In California, San Francisco Bay Area Rapid Transit’s recovery has also been more robust on weekends than it has on weekdays. In June, BART weekday ridership was about 34% of pre-pandemic expectations, with Saturday at 56% and Sunday at 65%.

Meghna Rao, 29, a frequent C train subway rider from Brooklyn, said she has been working from home since the start of the pandemic and just started heading back into the office last month. But Rao, who works in the film and television industry, still isn’t on a full schedule in the office and works from home on Fridays.

--With assistance from Michelle Kaske.