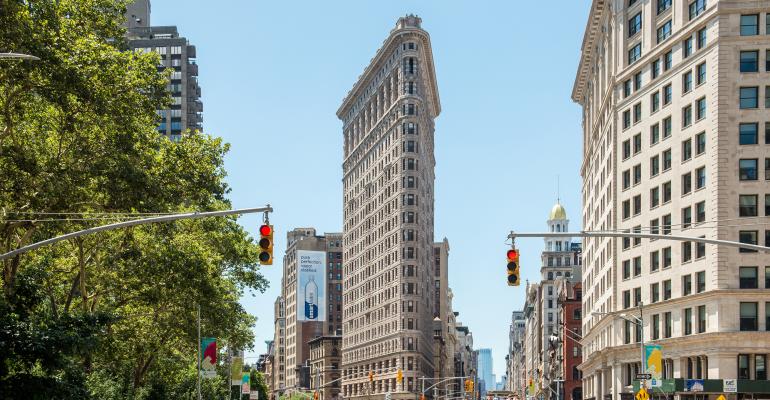 NYC’s Famed Flatiron Building Gets a Makeover for New Tenants

The nearly 120-year-old tower will undergo a total renovation of its interior as its office space sits totally empty for the first time in 60 years.

(Bloomberg)—One of Manhattan’s most famous landmarks -- the wedge-shaped Flatiron Building -- is getting an overhaul to attract an entirely new crop of office tenants.

The nearly 120-year-old tower near the foot of Madison Square Park is empty, with all of its space available for the first time in more than 60 years, while it undergoes a total renovation of its interior. The effort to fill it will be a test of demand for New York offices as the city emerges from the pandemic.

With Manhattan’s office supply at its highest level in at least three decades, the 21-story Flatiron Building will need to rely on its singular image to stand out. Asking rents are more than $100 a square foot. That’s pricier than the $77.46-a-square-foot average in the broader Midtown South area, according to data from CBRE Group Inc.

“We don’t think that the current market conditions actually relate to this leasing program because three years from now, there won’t be any space in the Flatiron,” said Mary Ann Tighe, chief executive officer of the New York tri-state region at CBRE, the brokerage marketing the offices. Space like this “doesn’t come up all the time.”

The tower at the corner of Fifth Avenue and 23rd Street, designed by architect Daniel Burnham, is among New York’s most enduring symbols and was one of the city’s tallest buildings upon its completion in 1902. It’s been empty since 2019, when Macmillan Publishers, its sole tenant for five years, moved downtown to the Financial District.

The property was gutted over the past year. As part of the work, nearly 650 window air-conditioning units were removed to make way for a central system. The penthouse, still stripped to the bones, will have new, large windows and a private wraparound terrace. The building’s lobby will also be renovated, and the six tiny elevators will be modernized.

The marketing process for the Flatiron Building’s more than 200,000 square feet (19,000 square meters) of offices has just begun, and the brokers already have received three proposals -- mainly from international firms looking for an outpost in the iconic property, Tighe said.

“The market has always embraced the unique in Manhattan,” she said. “And from the day the Flatiron opened in 1902, it has always been a unique building.”