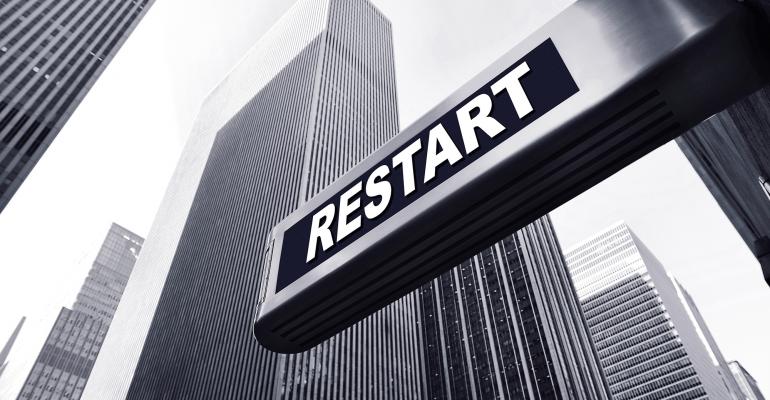 NYC Office Landlords Are Imploring Tenants to Start Reopening. Will They Be Heard?

The week after Labor Day may prove decisive in whether the city’s office tenants will start coming back in any real way.

As members of an unofficial alliance, executives from New York City property ownership and management firms including Related Cos., Rudin Management Co., RXR Realty LLC and SL Green Realty Corp. are coaxing tenants to return to mostly empty office buildings. One of the executives believes it’s the “patriotic duty” of tenants to reopen their offices and reinvigorate New York City, which has been pummeled by the coronavirus pandemic.

But will “patriotic” tenants salute this campaign? Some real estate professionals in New York City doubt the owners’ and managers’ charm offensive will work.

“Barring any incentives offered to the companies, a pressure campaign is not likely to move the needle all that much on ushering office occupiers back to the city,” Eltorai says.

A recent survey by the Partnership for New York City backs up Eltorai’s assertion. The survey found that just 8 percent of Manhattan’s 1 million office workers had returned to the workplace as of mid-August. Tech employers expect 74 percent of their workers to go back to the office by July 2021, according to the survey, with financial services employers at 55 percent and consulting firms at 50 percent.

Many Manhattan tenants are watching for clues from their competitors before welcoming their own employees back to the office, says Jonathan Tootell, New York City market lead for commercial real estate marketplace SquareFoot.

“Everyone’s saying, ‘I don’t want to be the first one in. I just want to see what happens with the first one, maybe the second one, and then I’m good.’ Right now, everyone’s looking to see who’s going to make the first move,” Tootell says.

Labor Day might become a turning point for a lot of Manhattan tenants, according to Kenneth Fishel, president and managing principal of New York City landlord Renaissance Properties, and other real estate players. If office occupants feel safe in the workplace, their kids are back in school and they’ve managed to make childcare arrangements, then Manhattan could see a post-Labor Day surge in tenants reopening their offices, Fishel says.

“Person-to-person collaboration is the lifeblood of a company’s culture. Working remotely just doesn’t do it,” he notes. “Businesses need people together in order to thrive, and many businesses want to resume after Labor Day.”

However, Fishel doesn’t believe a landlord-led push for a return to the office will influence tenants. Rather, he says, tenants will be more inclined to reopen their offices if they’re assured that landlords have enacted safety measures to protect workers, such as thoroughly sanitizing office space and improving air filtration. For the time being, though, Fishel has seen only a “trickle” of folks returning to offices in New York City.

Some New York City tenants are reluctant to invite workers back to the office because of health, financial and reputational risks, says Eltorai. One of those risks, he notes, is that workers who contract the coronavirus at the office will sue their employers.

The enduring allure of Manhattan

Office tenants must also contend with the split between workers who delight in working from home and workers who are eager to get back to the office, according to Emile L’Eplattenier, chief real estate analyst at New York City-based real estate website The Close. But even “diehard office lovers” might not be so keen on heading back to the workplace if many of their coworkers aren’t there and many Manhattan restaurants remain shuttered, he says.

Nonetheless, L’Eplattenier doesn’t think the demise of the Manhattan office sector is near.

“I tend to agree with Jerry Seinfeld and think the rumors of Manhattan’s death as a business center are greatly exaggerated,” L’Eplattenier says. “Yes, management and workers alike are facing a reckoning when it comes to working from home versus working in Manhattan. But the cachet of a Manhattan address will always have merit for some companies and brands.”

Furthermore, L’Eplattenier and other real estate observers say, young professionals thrive in the hustle and bustle of Manhattan. SquareFoot’s Tootell says Manhattan locations help employers attract and retain those young professionals. Going forward, however, Tootell predicts these and other New York City office workers will, in many cases, be working for employers that ultimately adopt a work-at-the-office and work-from-home hybrid.

Waiting for a rebound

As Manhattan landlords continue to make the case for working at the office, Michael Silver, chairman of Chicago-based Vestian Global Workplace Services LLC, says the New York City office market won’t bounce back until Americans have access to an effective, widely available coronavirus vaccine. And that, he predicts, won’t happen until late 2021 or early 2022—provided an effective, safe vaccine is found at all. Vestian, a tenant-focused commercial real estate firm, has a New York City office.

Meanwhile, Norman Bobrow, president of New York City commercial real estate brokerage firm Norman Bobrow & Co. Inc., says a full comeback won’t happen for another five to 10 years—longer than it took, he says, for the New York City office market to rebound after the “Black Monday” stock market crash of 1987, the dot-com bust of 2000-01 and the 9/11 tragedy.

“What we are facing now in NYC is devastating,” Bobrow says.

“People will come back to work”

In light of that devastation, Bobrow believes New York City employers should encourage workers to return to the office, now that coronavirus infection rates in the city have plummeted. As of Thursday afternoon, the rate of positive COVID-19 infection tests in the city stood at 1.39 percent. The city reported 52 new hospital admissions for the virus, 222 total people hospitalized with COVID-19 and five deaths. The rate of positive COVID-19 infection tests for the state of New York is currently at 0.8 percent, with 3.15 new cases and 0.43 new hospitalizations per 100,000 residents. Neighboring New Jersey, from which many office workers also commute to New York City, reported a 0.78 percent virus transmission rate, 301 new COVID-19 cases and 12 deaths so far in August as of Monday.

“Workers need to come back, since there is a terrible ripple effect with workers not returning to offices,” Bobrow says. “We see so many workers in restaurants, coffee shops and stores suffering and not being able to feed their families or pay rent.”

During his company’s July 23 earnings call, Marc Holliday, chairman and CEO of SL Green—New York City’s largest office landlord—said he is hopeful that the pandemic-propelled downturn is relatively short and is confident about the city’s long-term survival.

“People will come back to work. All the things that made New York one of the most desirable markets in the country will be here again once the pandemic is arrested,” Holliday said.

Disclosure: NREI is based in New York City and is part of Informa, which occupies three floors of a Midtown office building. Out staff has been working remotely since early March. Informa is beginning a phased return to office plan on Sept. 8, inititially opening 25 percent of the workstations on a single floor as hotdesks available to be booked by any employee on a daily basis. If there is no change in the rate of COVID-19 cases in the tri-state area, Informa will expand to 25 percent capacity on all three floors for a total of about 100 workstations.