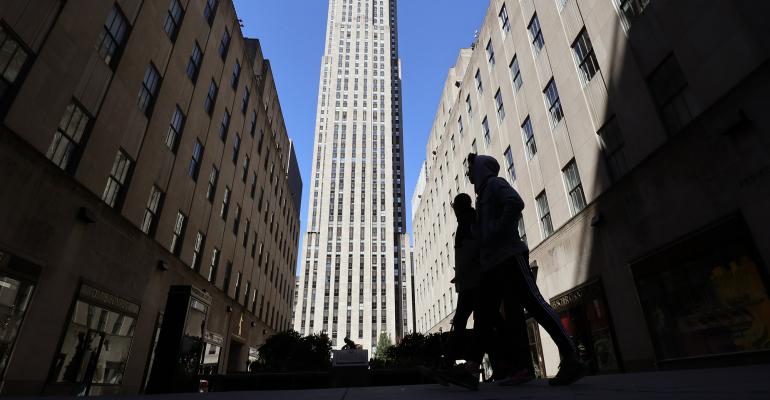 Part of the latest effort to lure workers back to offices is to offer COVID-19 testing.

(Bloomberg)—New York real estate executive Scott Rechler knows how to run an office building. Not in the job description? Creating testing centers for a deadly virus that’s swept the country.

Yet that’s what he’s doing now.

It’s part of the latest effort to lure workers back to offices that have been largely empty since the Covid-19 pandemic hit almost a year ago, shutting down Manhattan skyscrapers. Landlords are seeking ways to repopulate their buildings after earlier attempts -- from beefing up virus safety measures to lobbying the city’s finance bosses -- had little success.

Even as some of New York’s biggest landlords, including Related Cos. and Rechler’s RXR Realty, add on-site testing at their properties, few workers have returned. Just 14% of employees were back in their New York area offices as of Feb. 17, according to data from Kastle Systems, which manages security access for commercial-property owners.

Landlords say that offering testing can lead to higher occupancy, partially because getting a Covid test in the city is still a time-consuming process that can require waiting hours in line or paying extra for timely results.

“The missing piece of the puzzle has been testing for asymptomatic people,” Rechler said. “You think to yourself, as a real estate owner and operator, we need to provide testing to help our tenants.”

Since launching its program in December, RXR has run about 10,000 tests -- about 30% of those for tenants and the rest for the firm’s own employees. Testing was the catalyst for about 10 companies that brought workers back, and RXR is in talks with more than 15 others, a spokesman said.

Other landlords, such as SL Green Realty Corp. and Rudin Management Co., have expressed interest in offering tests at their buildings. And Vornado Realty Trust and Boston Properties Inc. are among companies that agreed to let the state set up testing centers in select buildings that would be open to the public.

It’s unclear if tests will give workers enough incentive to leave the comfort of their home offices and get back to old commuting routines. Many of the city’s employers are aiming for a return some months later, after vaccines become more readily available.

“It seems unlikely to broadly move the needle,” said Danny Ismail, an analyst at property analytics firm Green Street. “At the end of the day, people need to feel safe, and that’ll come about via lower infection rates and higher vaccination rates.”

Still, testing can be a way to show that “a return to the office can be conducted safely and effectively,” Ismail said. “If a tenant was on the verge of returning to the office, potentially, this might help tilt the decision.”

“Responses have been positive, but it’s too soon to see whether or not it’ll spur a decision to come back,” said Philippe Visser, president of Related Office Development. “It’ll be a combination of factors, including the vaccine rollout.”

At buildings including RXR’s headquarters, 75 Rockefeller Plaza, the firm’s employees and tenants use an app that monitors potential virus exposure by collecting information on where they live and their activities. An algorithm suggests testing protocols, which can range from every three days to two weeks.

The process takes roughly five minutes: After arriving in the lobby, a worker is led into an empty room for a quick nasal swab. Sometime 24 to 48 hours later, the results are shown on the app.

RXR is using the testing program on a limited basis now and expects to roll it out broadly in the coming months, according to Rechler.

His company also is looking into how to help tenants get vaccinated as shots become more widely available. Still, Rechler doesn’t expect office life to go back to normal anytime soon.

“Even post-vaccination,” he said, “there’s going to be a longer period of time, just like post-9/11, that we’re going to have to adjust how we work.”