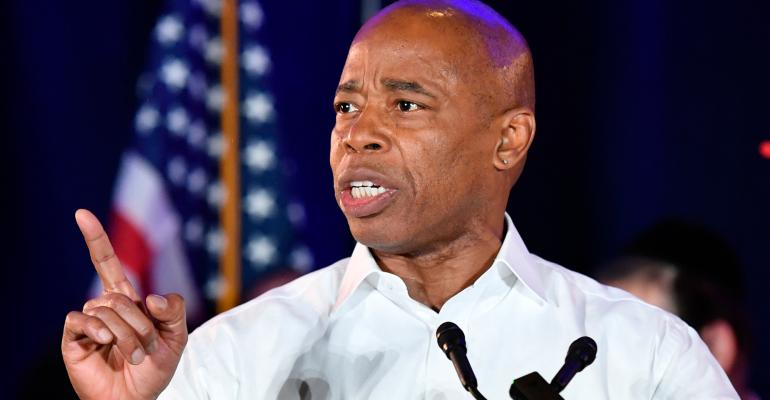 The mayor met with 100 CEOs this week to coax them to participate in a summer youth jobs expansion and get back into offices to stimulate the city’s economy.

(Bloomberg)—New York City Mayor Eric Adams told leaders of major companies in the city it was time to get their workers back in offices, emphasizing that empty buildings are holding back the city’s pandemic recovery.

“We can’t send mixed messages,” Adams said of different major banks and tech companies that continue to delay return dates. “We can’t keep kicking the can down the road.”

The mayor said he met with 100 chief executive officers this week as part of scheduled meetings his office has with both small businesses and corporations in the city. He used the meeting to coax them into participating in his summer youth jobs expansion and to get their workers back into the office to stimulate the city’s economy.

“Now is the time for us to get back,” Adams said in a press conference for his first budget presentation. “I’m hoping within the next few weeks the CEOs map out a real plan of ‘this is when you need to come back.’”

A winter surge in Covid-19 cases, due to the highly transmissible omicron variant, has hampered a slow return to offices. That progress had peaked at over 35% in December and then plummeted down to just over 10% in January, the mayor said, as the seven-day average of cases in the city reached their pandemic peak.

The virus has slowed since and the current seven-day average of positive cases in the city is roughly 1,100. Citigroup workers in the New York City region were asked to prepare to come back to the office last week, while Wells Fargo & Co. said it’s planning to bring employees back to the office in mid-March.

Still, only 28% of workers are swiping into offices in the New York metro area, according to data from security company Kastle Systems as of Feb. 9. “It’s time to get back to work,” Adams said. “The time frame is now. I’m going to work.”