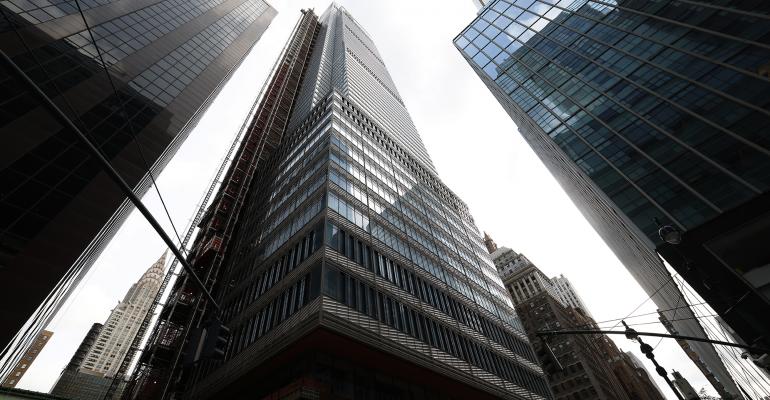 Michael M. Santiago/Getty Images
One Vanderbilt, a tower that opened at the depths of the pandemic, has attracted smaller investment firms.
Property Types>Office

Money Managers Are Swooping In to Fill Manhattan’s Office Void

At a time when New York towers are struggling with high vacancies and many workers are still remote, money managers are seeking trendier digs.

(Bloomberg)—Hedge funds and investment firms are coming out of the pandemic embracing an out-of-favor asset: Manhattan office space.

Blackstone Inc. and Citadel are on the hunt for new locations. Boston’s Wellington Management, a $1.3 trillion asset manager, last month signed a letter of intent for its first New York office. Hedge fund Verition Fund Management recently relocated on Park Avenue in a massive expansion, while Sculptor Capital Management is scoping out space.

At a time when New York towers are struggling with high vacancies and many workers are still remote, money managers are seeking to accommodate growing staff and encourage in-person collaboration with trendier digs. Along with tech companies, they’re helping to fill part of the void left from employers giving up space -- even as Manhattan’s office supply continues to grow faster than demand.

“These are companies that have done very well through the pandemic,” said Callie Haines, executive vice president at Brookfield Properties, one of New York’s largest office landlords. “With the market as it currently stands and the vacancies, they’re using it as an opportunity to grow and provide great environments for their employees to continue to attract and retain talent.”

It’s a contrast to the moves by big banks, long a dominant part of the city’s office market. In the past two years, private equity firms, hedge funds and asset managers accounted for 35% of the square footage of new leases signed by financial-services and insurance firms, according to data from Savills Research. That compares with 20% for large institutional banks, which represented almost a third of new deals just five years ago.

While Morgan Stanley recently leased more space, and JPMorgan Chase & Co. is building a state-of-the-art skyscraper, the broader trend for banks has been toward scaling back. HSBC Holdings Plc is relocating its U.S. headquarters to a new tower in the Hudson Yards area, but the footprint is less than half of its current size in the city.

Barclays Plc has also been exploring new offices but seeking a reduced amount of space. Deutsche Bank AG and Citigroup Inc. took steps to consolidate well before the pandemic.

Even as many banks have been vocal about the importance of being in the office, their large blocks of space to accommodate thousands of people may be more ripe for consolidation in the age of hybrid work. Other companies, such as JPMorgan and Goldman Sachs Group Inc., outright own their buildings and are less apt to be in the leasing market.

Hedge funds and small investment firms, meanwhile, have comparatively compact teams and mostly lease their offices, meaning they can be more nimble with their real estate choices -- easily moving to a larger space and choosing attractive locations. Many mega-funds benefited from soaring equity markets during the past two years and ramped up hiring. They want to keep those employees, and add even more.

“With private equity, hedge funds and the like, their cost structure is entirely different,” said Kathy Wylde, president of the Partnership for New York City, a business advocacy group. “These are firms with an established office culture and their workforce wants and needs to be together.”

The leasing trends may be tenuous: Many funds are struggling as tumultuous markets, inflation worries and the war in Ukraine have eaten into returns. And some money managers are opening outposts, expanding, or outright moving to low-tax, sunny areas such as Florida’s Miami and West Palm Beach.

Still, the appetite by large asset managers shows the importance of having a strong New York presence, Wylde said.

“As long as their people want to be in New York, that’s where they’re going to be,” she said. “They will absorb rents and other costs to accommodate them.”

For Wellington Management, the decision to open its first Manhattan office came amid a hiring spree that’s expected to boost its New York employee base to about 400 to 500 people, from less than 100 now. Key to its approach was finding a building that was beautiful and unique enough to appeal to current and new talent.

“What we’re looking to do is create a magnetic office space -- making the office a space that people are excited to come to, versus a place people feel they need to come to,” said Chief Financial Officer Ed Steinborn.

Wellington will let staff work remotely 40% of the time. The thinking: Make the office a more attractive space than home, while still allowing staff the flexibility of both.

New buildings, which tend to offer the amenities and open floor plans that many companies covet, are in far greater demand than older properties. One Vanderbilt, a skyscraper by Grand Central Terminal that opened in the depths of the pandemic, has been leased by firms including a unit of Mubadala Investment Co. and MSD Partners, which invests Michael Dell’s family wealth. One tower being redeveloped, 425 Park Ave., has attracted Maverick Capital and Citadel.

Tech companies have also been active in the market, surpassing financial-service and insurance companies on new leasing in the past two years, Savills said. Facebook parent Meta Platforms Inc. is taking more space at an East Village tower, nearly filling the building. Amazon.com Inc. has also been seeking to expand in New York.

These deals still are unlikely to be enough to fill Manhattan’s glut of inventory. Even with an uptick in leasing, supply continues to reach records and landlords have to dangle incentives like months of free rent and tenant improvement allowances to get deals done.

Even more sublease space has hit the market in the past couple weeks alone, a sign that employers are starting to get serious about their post-pandemic office plans and long-term flexible work, said David Goldstein, vice chairman at Savills. Return to office has been stubbornly slow: About 38% of New York-area workers were back at their buildings as of May 4, according to security firm Kastle Systems, a figure that has been little changed since mid-March.

“Companies are doing everything they can to entice their employees to physically come back to offices,” said Ben Friedland, a vice chairman at CBRE Group Inc. “One important lever they’re using is to upgrade the quality of the space and the amenities they provide.”