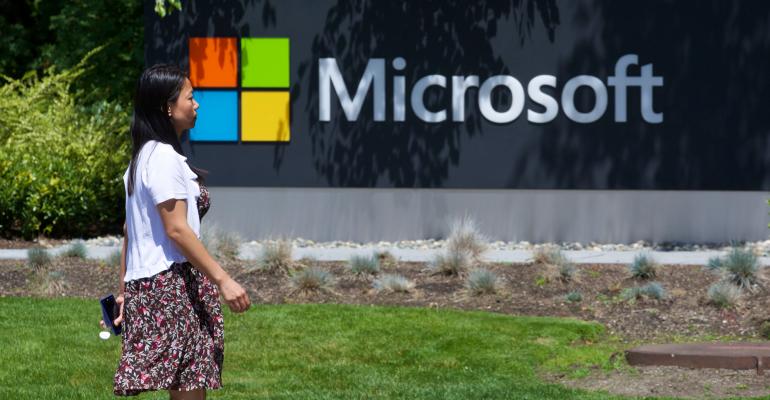 For Microsoft, the guideline is that schedules more than 50 percent remote must be approved by managers.

(Bloomberg)—Microsoft Corp. has begun calling employees back to its headquarters in recent weeks, but its return-to-office strategy hinges on hybrid work.

From Wall Street to Silicon Valley, companies are navigating the messy transition to the workplace after a two-year hiatus during the pandemic. Microsoft has a unique perspective since it sells remote collaboration tools that compete with Zoom Video Communications Inc. and Cisco Systems Inc. Even as workers trickle back to their desks, the company’s leaders are focused on those employees who aren’t working in the office.

“It’s counterintuitive,” Jared Spataro, corporate vice president for Modern Work at Microsoft, said in an interview. “You have to design your physical space for the people who aren’t there.”

Spataro will be speaking at the Bloomberg Work Shifting 2.0 Summit in New York on Wednesday.

Microsoft’s return to the office is among the many corporate migrations that were delayed, sometimes more than once, in recent months as companies grappled with seesawing Covid infection rates and a legal battle over nationwide vaccine mandates that went to the Supreme Court. Soaring gas prices of late could also slow the movement back to offices, but many CEOs and civic leaders like New York Mayor Eric Adams are eager to see workers back at their desks.

For Microsoft, the guideline is that schedules more than 50% remote must be approved by managers.

At The Hive, its test center a few miles from its Redmond, Washington campus, engineers roll office chairs back and forth and shift camera angles around to capture the optimal teleconference environment. Staffers down the hall pose as remote attendees, providing immediate feedback. A full-size replica of a room Chief Executive Officer Satya Nadella and other senior leadership use for top-level meetings fills a warehouse floor.

What they’ve found is that small tweaks can really improve the experience, making those daily calls less of a grind. The typical conference table, for example, was redesigned to a triangle pointed away from the screens, or a truncated semi-circle facing the screen, United Nations-style. Both setups address a big problem with standard conference rooms: Attendees don’t fully face the camera, and in-person participants migrate toward each other.

Such shifts could help Microsoft’s Teams software suite get a leg up on its rivals. Revenue estimates for conferencing software put Microsoft in second place behind Zoom in the first half of 2021, and above Cisco’s Webex, according to researcher IDC. For team collaboration applications during the same period, Microsoft Teams held 25% market share, above the 18% for Salesforce.com Inc.’s Slack, and well above Atlassian Corp. (Trello and Confluence) and Smartsheet, both at 7%.

“The growth across the market is very, very healthy,” Wayne Kurtzman, research director for social and collaboration at IDC, said in an interview. “Most of the top-ten vendors are growing at double digits,” with the latest expansion into workers such as nurses and construction crews.

Meantime, at Microsoft’s headquarters last week, occupancy jumped 142% from the prior one, according to the company, which declined to provide further details.

The mood resembled a college move-in day, with giddy staffers excited to no longer be stuck at home. Among Microsoft’s roughly 100,000 workers in the U.S. returning to office life was Dele Downs Kooley. She’s fifteen months into her job as a senior human resources program manager for diversity and inclusion, but hasn’t yet worked shoulder-to-shoulder with her full team.

“We are all trying to figure this out at the same time,” she said.

While Microsoft executives from Nadella on down have been promoting the idea of the so-called metaverse to connect workers in various locations, the company also says it knows it has to take it slow.

“We’re just trying to meet people where they are,” Spataro said. “You kind of have to crawl before you can move to a fully virtual world.”

--With assistance from Matthew Boyle and Dina Bass.