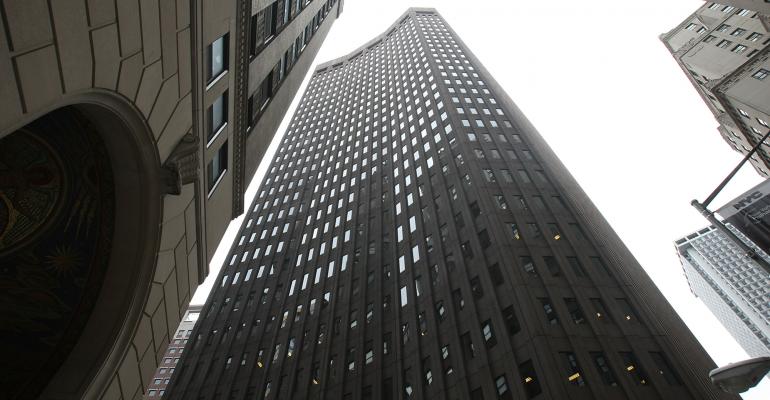 Manhattan Offices Face Reckoning as Older Buildings Get Left Behind

The question for owners of older buildings is whether it’s worth pouring hundreds of millions of dollars into a full gut renovation.

(Bloomberg)—The fortunes of Manhattan’s office market are coming down to old versus new.

Glassy skyscrapers that have popped up in recent years are luring companies seeking new space and preparing for the hybrid-work era, a sign of New York’s revival from the depths of the pandemic. Left behind are countless older buildings that haven’t been modernized in the past decade, presenting a costly problem for landlords.

The question for owners of those buildings is whether it’s worth pouring hundreds of millions of dollars into a full gut-renovation -- a gamble at a time when office use is down in general, available space is piling up at a record rate and high-profile companies such as Deutsche Bank AG and HSBC Holdings Plc are shrinking their global footprints.

“We are going to see a diminished use of offices as hybrid work becomes more popular,” said Ruth Colp-Haber, chief executive officer of brokerage Wharton Property Advisors. “The really cool buildings have a huge amount of activity. But for anything other than ‘really cool,’ the landlords are struggling and the dichotomies are getting worse.”

Doing a major makeover holds no guarantee that a property will compete. Not doing it would mean dwindling rent rolls, potentially leading to mortgage defaults and foreclosures. Another way out -- converting obsolete office buildings to housing -- can be complicated and prohibitively expensive.

The office-vacancy rate in Manhattan is 12.3%, up from 7.8% two years ago, data from CoStar Group Inc. show. At 15% of existing buildings, at least a fifth of the space is available.

As leasing picked up last year, about 65% of new deals were at higher-quality buildings -- meaning properties that were recently constructed or have undergone a significant renovation, and have above-average maintenance with outdoor spaces and plenty of natural light, according to CoStar.

In a city where roughly 90% of the office stock is more than 20 years old, the disparities are stark. New skyscrapers, including those at the Hudson Yards mega-development and One Vanderbilt near Grand Central Terminal, have filled up quickly, attracting the world’s biggest finance and tech tenants. Meanwhile, older buildings that haven’t been overhauled in the past decade or so can barely attract interest, even with major rent discounts.

“The market is telling us very clearly that the era of driving to the cheapest price on office space, regardless of its condition, is, for most companies, no longer an acceptable real estate strategy,” said Mary Ann Tighe, CEO of New York’s tri-state region for brokerage CBRE Group Inc.

Tenants are gravitating to the best-of-the-best trophy properties that are close to transit hubs and fitted with posh amenities including gyms, luxury restaurants and outdoor terraces. If workers are going to leave the comfort of their home offices, they want nice perks in exchange.

“The requirements for a building are so much higher coming out of the pandemic,” said Sarah Hawkins, East Region CEO at Hines, which is working with SL Green Realty Corp. on the redevelopment of One Madison.

Building upgrades are routine for landlords, who regularly reinvest capital into older properties to maintain them. But small updates won’t do much to increase their appeal.

“It has to be a real commitment to transforming the asset,” said Peter Riguardi, chairman of the tri-state region at Jones Lang LaSalle Inc. “We’re seeing a lot of renovations that are going beyond just modest face-lifts, where they are taking out slabs, being creative with floor plates, removing and changing heating and air-conditioning systems, changing windows.”

Even for landlords who have significantly reinvested in their properties, the supply of space can far outweigh the demand. Redeveloped offices including 120 Broadway in the Financial District and the Starrett-Lehigh Building in West Chelsea, at more than 2 million square feet (185,806 square meters) and spanning a full city block, have vacancy rates above 25%, according to CoStar.

Starrett-Lehigh’s landlord, RXR Realty, expects to reposition some spaces in the property as current leases expire. The firm just signed a major deal with Roku Inc. at another of its buildings, 5 Times Square. RXR spent more than $130 million on renovations and added a 50,000-square-foot amenity center at the tower, built in the 1990s.

“It went from a nice thing to have to an absolute need to have post-pandemic,” RXR CEO Scott Rechler said. “We need to do this for tenants to get them in.”

Older properties are competing with giant blocks of space that are being constructed in towers such as 2 Manhattan West in the Hudson Yards area, and Deutsche Bank’s former headquarters at 60 Wall St., a 1980s building that’s getting an overhaul costing at least $250 million. Numerous towers are also under development, which will only add to the immense supply.

The Financial District is particularly saturated with aging towers.

“Downtown is a whole other thing because there’s so many of these lower-quality buildings,” Colp-Haber said. “The buildings that are suffering are 1970s vintage, that have nothing different about it, no particular charm, fewer windows.”

While many buildings in the area have had more-minor updates, they haven’t had the type of overhaul that’s needed to lure tenants these days.

At 14 Wall St., across from the New York Stock Exchange, vacancy is close to 30%. The property, built in 1912 as the original home of Bankers Trust Co., has gotten some lobby improvements and amenities including a conference center, but it hasn’t been gut-renovated recently. Goldman Sachs Group Inc.’s former headquarters at 85 Broad St. got an upgraded lobby, bike racks and wellness rooms as part of interior renovations after Hurricane Sandy. Still, the tower has a vacancy rate of roughly 20%.

“We cannot deny 85 Broad St. is a 1983 vintage building, but given its prime location and with ongoing investments it will continue to appeal to current and future tenants,” the owner, Ivanhoe Cambridge, said in an email.

Even if landlords are willing to spend on modernizing their older buildings, some properties still won’t be able to compete.

“It really boils down to basic elements of the building: ceiling heights, structure, location, window line -- that all matters,” Hawkins said. “Even with a full repositioning, you can’t compete because of the bones in the building.”