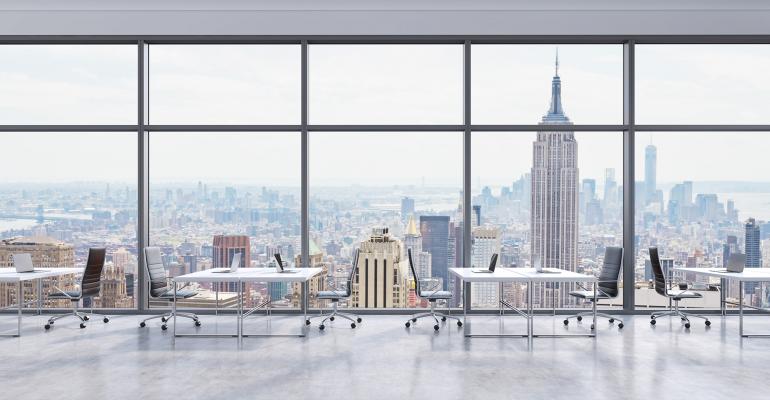 (Bloomberg)—Prices for Manhattan office buildings may tumble as much as 30% in the next year -- victims of falling demand, rising costs and shorter leases, according to Tom Shapiro, chief investment officer of GTIS Partners.

“The notion of the market dropping 20% to 30% over the next year or so is not a tough call,” Shapiro, whose Manhattan-based firm oversees $4.5 billion in real estate investments, said in an interview. “It should be pretty obvious.”

While Shapiro isn’t alone in predicting a decline before buyers are willing to step back into the market, he sees a quicker slide than most.

Sales and leasing of New York offices have collapsed since Covid-19 forced most desk workers to telecommute, shrouding future demand in uncertainty. The office-availability rate in Manhattan jumped to 14.9% in January, the highest in data going back to 2000, according to Colliers International. Rents fell to their lowest in almost three years, the brokerage reported.

“One of the things people loved office for is it had long-term cash-flow stability,” said Shapiro, whose company doesn’t own any offices in Manhattan.

Low interest rates can cushion some of the price contraction by offsetting the cost of ownership, he said.

The first New York office sellers are likely to be institutional investors who want to reduce their allocation, Shapiro said. Some highly leveraged owners may be forced to sell because they can’t repay or refinance the debt on their buildings. Even if properties aren’t occupied, as long as tenants continue to pay rent, landlords will feel little pressure to cut their prices to meet buyer expectations.

“We’re at that classic bid-ask spread,” Shapiro said. “Buyers want a deal and sellers aren’t selling. But eventually, at some point, there’s capitulation and you want to sell your building and that will set a new price point.”

The pandemic won’t end the need for corporate offices, according to Shapiro.

“I strongly believe that people will return to offices and that human interaction is an important part of business,” he said. “You can’t build culture remotely.”

--With assistance from Melissa Karsh.