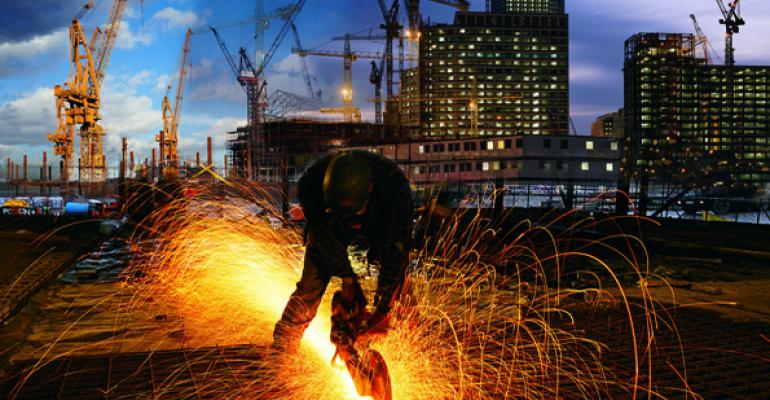 Competition for tenants in markets with an oversupply problem is pushing concessions higher, according to real estate services firm JLL.

With new office construction currently topping 100 million sq. ft., the office market is beginning to turn in favor of tenants in some markets. “The pendulum is swinging toward tenants in cities with a supply-demand imbalance driven by new construction,” says Scott Homa, senior vice president and director of U.S. office research with real estate services firm JLL. Homa notes that high levels of new construction are creating weakness for lower quality buildings, as well as overhang in new deliveries.

“Deceleration in the broader U.S. office market has occurred over the past 36 months with reduced absorption, and expansion now more confined than in 2016,” Homa says. “If you strip away co-working market, the office market has actually contracted in first quarter 2018.”

Competition for tenants in markets with an oversupply problem is pushing concessions higher, according to a first quarter 2018 JLL office report, which noted that while office rents grew overall by 1.6 percent in the first quarter, rent gains were outstripped by tenant concession packages. Allowances for tenant improvements (TIs) rose 3.5 percent in the first quarter to an average of $75 per sq. ft. That figure was even higher in markets where there is a lot of competition for tenants—up to $150 per sq. ft. for trophy properties.

The exceptions include Seattle and Los Angeles, where net effective rents are outperforming markets like New York, Chicago and the District of Columbia. Net effective rents are flat or diminished by aggressive concessions in these three markets, which also account for more than one-third of all new construction underway, with 15.4 million sq. ft. rising in New York, 7.3 million sq. ft. in Chicago and 7.6 million sq. ft. under construction in Washington, D.C. The JLL report notes that any new office deliveries will exacerbate oversupply in these gateway markets, which are already being negatively impacted by rightsizing and consolidating firms.

Meanwhile, the Seattle and Los Angeles office sectors remain tight, with 4.8 million and 2.2 million sq. ft. under construction, respectively. Expansion of tech companies is driving the office demand in Seattle, while companies representing the intersection of entertainment and technology—Netflix, Amazon, Hulu—are largely responsible for strong office performance in Los Angeles.

While extraordinary concessions are offered in markets with an oversupply of new office product, Homa says, “We’re not seeing a reset in base rents—in most cases landlords are preserving or even raising face asking rents.” He notes that new product generally commands a 25 to 50 percent rent premium over second-generation office space, but concessions help to make the price tag more palatable to tenants, thereby reducing sticker shock.

This is because demand is not keeping up with supply, he adds, pointing out that there is little new construction in major California cities, as there is not enough entitled land available for development in large CBDs. In addition, the entitlement process is a long, arduous and extremely expensive one compared to markets like Houston and Dallas, which are development friendly with less regulations, fewer planning/zoning restrictions and lots of land available for expansion.

The greatest concessions in large California cities for space in new buildings according to Galaxidas, include several months of free rent on a five- to 10-year lease, if rental rates are high enough to justify it, and a hefty TI allowance, as extensive tenant improvements are required for interiors that are in shell condition.

“The difference when a tenant goes into second-generation space is a landlord isn’t going to pay for much in the way of improvements, because the space has previously been built out and, due to high demand and short supply of space, [the landlord] is less willing to do improvements,” he adds. For new product a tenant may get up to $60 per sq. ft. in TI allowance, but the figure goes down to $10 to $15 per sq. ft. for second-generation space.

Other concessions landlords may be willing to provide include: early occupancy equating to one to two months of additional free rent; the option to renew at a fixed incremental rate, rather than market; and “first right of refusal or relocation,” a provision in the lease agreement that allows the tenant to expand or move to a larger space when the company outgrows the original space.

Houston-based Stuart Showers, director of research services at real estate services firm Transwestern, notes that companies are becoming more thoughtful about the impacts of their real estate decisions on employees. “As such, there is a big appetite for new office space, as the latest wave of office construction is more efficient and offers the type of amenities occupants need to attract and retain talent,” he adds, noting that all types of firms, from tech and creative firms to legal, financial and professional services companies, desire state-of-the-art office space in quality locations.

But the most attractive office space by far, according to Showers, is in mixed-use projects, which command up to a 30 percent rent premium over stand-alone, competing projects. “The retail mix in these projects is more thoughtfully planned than in the past,” Showers adds, noting that projects generally include a fitness facility and an attractive variety of food, bank and other services that offer occupants convenience and choice and help tenants attract and retain talent.

Showers points out that while this type of project has been around for a long time in high-density markets like Boston, New York and Los Angeles, it is a more recent addition to the Houston marketplace.

While Houston continues to see demand for both new and second-generation office space retrofitted with amenities, Showers says one-fourth of office inventory is listed as available for lease due to both overbuilding and an abundance of space exited by energy companies. New construction, therefore, presents a challenge, with competition for tenants heated and concessions generous, with landlords routinely offering a year of free rent on a 10-year lease and exceptional TI packages.

“Interestingly, owners are better funded than in the past, giving them the wherewithal to do ‘financial engineering’—increase TIs and free rent—to preserve base asking rent and get the bumps they want,” he adds, noting that once the free rent period ends, the rents justify the losses.