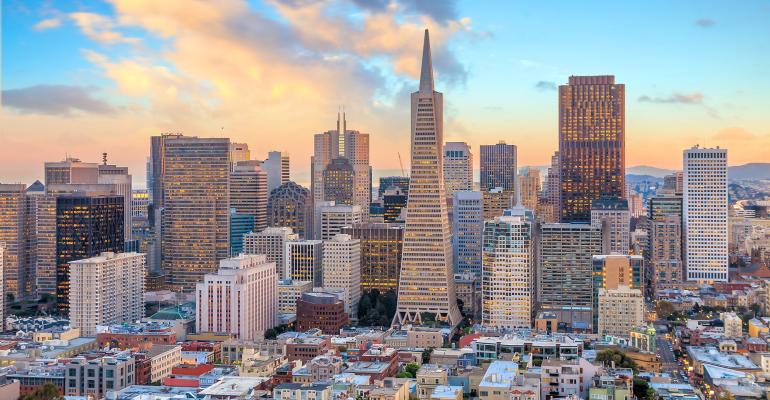 A recent article in the San Francisco Standard predicted an “epic crash” for the city’s office sector. Here’s what our CRE experts say about its claims.

A recent article in the San Francisco Standard claims that San Francisco’s office market will soon be facing a collapse. The paper noted that Urban Displacement Project ranked the city’s downtown recovery as dead last among more than 60 cities across North America. It also noted that a report published in November by the Institute of Taxation and Economic Policy (ITEP) calculated that San Francisco could see a short-term decline in commercial property values of up to 43 percent.

To gauge the validity of San Francisco Standard’s conclusions, WMRE reached out to some commercial real estate insiders to get their insights.

(Note: Five major commercial real estate brokerage and advisory firms were invited to comment on claims made in The Standard report, but only one brokerage and one ratings firm responded.)

1. The Standard claims that the tech sector that made the city’s office market a success is now in demise, as a significant number of major tech employers—most recently Yelp and Airbnb—are fleeing the city or have gone fully remote since the pandemic and are not returning to their office buildings. The newspaper predicts that as the clock runs out on office leases signed during the pre-pandemic boom, vacancy will rise to as high as 43 percent and 53 percent in the mid-Market and Jackson Square areas, respectively.

It appears that the market is trending in that direction, as Colin Yasukochi, executive director of the tech insights center with real estate services firm CBRE, notes that many companies reduced the amount of space they had previously leased through subleases or took less space. He notes that office vacancy rose from 3.7 percent in the fourth quarter 2019 to 24.2 percent in the second quarter of 2022.

However, even with tech companies downsizing their space, going fully remote or relocating from the city, San Francisco was still far and away the leader in tech leasing activity in the first quarter of 2022 compared to the same period a year ago, according to CBRE’s tech office leasing insights report. Approximately 4.85 million sq. ft. of office space was leased by tech tenants in San Francisco during the period, up 31 percent from the first quarter of 2021.

2. The Standard report claims that the 25 million sq. ft. of vacant office space now available for lease or sublease in San Francisco exceeds the levels reached during the Great Recession and the dot-com bust.

Tenants continue their flight to quality, however. The vacancy rate for newer, trophy office assets was 20 percent below that recorded at class-C buildings, and the effective average rent for trophy office space in San Francisco is above $106 per sq. ft., according to the second quarter U.S. Office Outlook report from commercial real estate services firm JLL.

The JLL report notes the city’s strong economic fundamentals. Unemployment remains lower than the national average at 1.9 percent compared to 3.7 percent for the U.S. overall. Year-to-date venture capital funding in the Bay Area has reached $26.3 billion. The city’s GDP remains strong. And while San Francisco remains a market favorable to tenants, with over two million sq. ft. of office subleases expiring by the end of 2023, well-positioned assets should continue to do well.

Despite rising office vacancy overall, Yasukochi notes that “San Francisco has proven to be a resilient city, and its recovery will be gradual.” Pascal St. Gerard, an analyst and senior director at research firm Fitch Ratings, echoes that sentiment, saying that Fitch views this hiccup in the office market as cyclical.

3. The Standard claims that lower rents and rising vacancy is leading office landlords to seek massive reductions in assessed property values for tax bill purposes and predicts a decline of up to 15 percent in the city’s property tax collections, amounting to a roughly 4 percent drop in total revenue or roughly $240 million annually.

Noting that San Francisco’s population is among the most affluent in the nation, Karen Ribble, analyst and senior director at Fitch Ratings’ U.S. public finance group, who covers the San Francisco market, says that Fitch affirmed San Francisco’s certified AA+ rating and Stable Outlook in April for fiscal year 2022-23, based on tax revenue collected and, in part, the city’s ‘substantial reserves.’

She says that while the current state of the city’ office market does present risks and remains a cause for concern, due to the long-term nature of office leases, any change in reassessments—if it happens—and reduction in tax revenue would be gradual, giving San Francisco a long runway to make adjustments, according to Ribble.

“This is a moving target, but development hasn’t stopped,” adds St Gerard, suggesting that this will create opportunities for growing sectors in different parts of the city to repurpose vacant office assets for other uses, such as life science research. He stresses, however, “This will be gradual—it won’t happen overnight.”