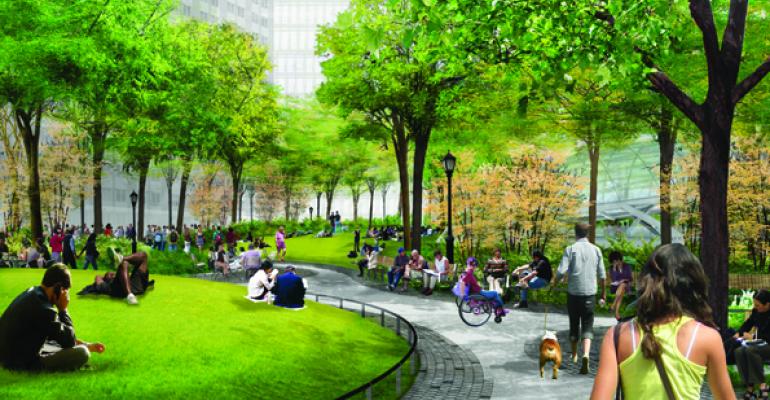 Asking office rents for properties in the Hudson Yards neighborhood have jumped 40 percent in a year, according to CBRE.

(Bloomberg)—Hudson Yards, one of Manhattan’s more inaccessible office locations, is quickly becoming its most expensive as its developers rewrite real estate’s most-enduring axiom.

So far, their bet is paying off. Asking rents in the neighborhood on the far-west side jumped 40 percent in a year, according to brokerage CBRE Group Inc., driven by demand from companies such as BlackRock Inc., SAP SE and L’Oreal SA. Hudson Yards officially opens this Friday.

“New York City has shifted west, whether it’s corporations, where people want to live, where they want to play, where they want to shop,” Related Chief Executive Officer Jeff Blau said in a Bloomberg Television interview on Monday. “And Hudson Yards is really at the epicenter of that.”

As staff move in over the coming months, there’s still one major test.

A single subway line, the No. 7, serves Hudson Yards, where about 40,000 office workers will ultimately labor in five skyscrapers.

The Hudson Yards station, which is 125 feet (38 meters) underground and features the longest escalators in the system, was designed to handle 25,000 peak-hour travelers, according to the Metropolitan Transportation Authority, which anticipates it will become the busiest single-line station in the city.

“That’s a bit risky,” Birnbaum said. “If you’re going to take a cab or a bus, it takes a long time to get to that area, so they’re very dependent on the efficiency of the 7 line and the escalator system. Is that a risk I would take? I don’t know.”

A spokeswoman for Related said that transit options are a strength, rather than a weakness, of the project.

“With unsurpassed connections to commuter rail service, the subway system, the West Side Highway, the Lincoln Tunnel and ferries along the Hudson River, Hudson Yards will minimize commute times from surrounding neighborhoods when compared to Midtown destinations,” said Joanna Rose, who also listed Penn Station, the Port Authority Bus Terminal and the West 30th Street heliport.

“The new subway station was built with the Hudson Yards commercial and residential development in mind,” said MTA spokesman Shams Tarek. It “has plenty of capacity for what’s expected to come, not to mention the fact that there are about a dozen bus lines serving the area and many people working here are expected to walk.”

So, transit may turn out to be the project’s Achilles’ heel or its best feature. Either way, Hudson Yards is showing that big tenants are focused on the types of amenities they’re offering.

“Landlords who are having tenants move out of their buildings to go to these new developments, when they’re faced with a large block of space, are investing money to make them more relevant,” said Bill Montana, a senior managing director at real estate firm Savills Studley. “That money can include a lobby, it can include retail, it can include amenities, it can include technology, it can include adding things like conference centers and flexible workspace solutions.”

Like many major office developments, tenants who signed early got the best deals. Average asking rents in Hudson Yards held at about $85 a square foot through the second quarter of 2018, according to CBRE. That’s about in line with midtown. Then growth began to accelerate, jumping to $126.02 a square foot in the third quarter, or roughly double the average rent in downtown Manhattan.

Once an industrial wasteland devoid of shops and office workers, the area now commands the second-highest office rents in Manhattan, Savills Studley said in a fourth-quarter report.

“When Hudson Yards first came online, they did cheap deals to entice people to be the first early adopters,” Montana said. “That’s a common mechanism for developers to use -- give an early occupant a really good deal to build momentum, and then once you’ve got momentum, you can increase prices.”

Now that the bargains have disappeared at Hudson Yards, tenants that are still in the market for space may be more willing to look elsewhere in the city or stay put, Bloomberg Intelligence analyst Jeffrey Langbaum said.

“Rents have actually increased over there to the point where it’s no longer a pricing advantage to lease space in Hudson Yards versus elsewhere in the city,” Langbaum said. “There are definitely data points that are showing a willingness of people to stay in core Midtown.”

JPMorgan Chase & Co., which considered a move to Hudson Yards, opted instead to tear down and rebuild its existing headquarters on Park Avenue in Midtown. Carlyle Group LP recently expanded its 15-year lease at One Vanderbilt, the 1,401-foot office tower that SL Green Realty Corp. is building. Both projects fell under the 2017 rezoning of Midtown East, which allowed developers to construct new, taller skyscrapers in exchange for upgrades to public spaces and transit.

Carlyle and JPMorgan are both adjacent to Grand Central Terminal, with five subway lines and commuter trains to northeast suburbs. By comparison, the World Trade Center site downtown has a dozen subway lines close by, plus Path trains to New Jersey.

Wherever companies locate, the emphasis is still on state-of-the-art space, said Mike Slattery, a senior research analyst at CBRE.

“Tenants who are interested in large blocks of space now have this new product to tour, whereas 10 years ago, it was really more of a game of musical chairs,” Slattery said. “It’s very clear that tenants in Manhattan are looking for new or like-new opportunities.”

Rent growth at Hudson Yards is already plateauing, especially as competition increases. In the area, developments are planned by Brookfield Properties, Tishman Speyer, and by Boston Properties Inc. in partnership with Moinian Group. The average asking rent in the neighborhood had fallen to $118.38 as of Feb. 1.

“When you have a lot of product in the same neighborhood, that generally doesn’t portend raising prices unless you’ve got unbelievable demand,” Montana said. “All the competition created by all that new product coming online typically is going to suppress price increases.”