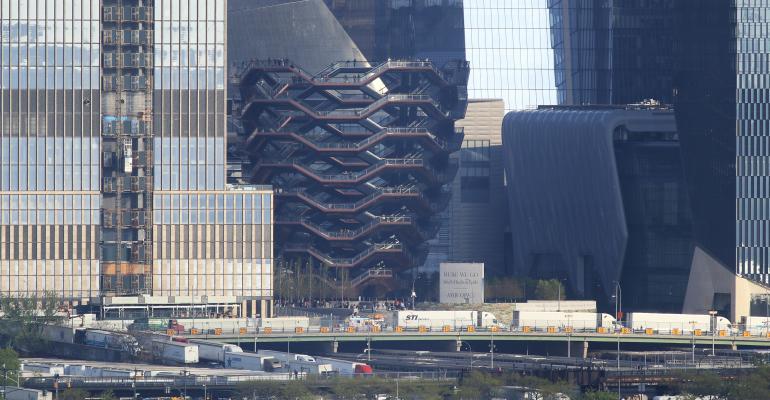 Owners of older office buildings are feeling the pressure to renovate and reposition their properties to stay competitive.

In March, Manhattan saw the opening of Phase I of Hudson Yards, a 28-acre, $25 billion rail-yard redevelopment that is creating a new commercial district within New York’s Midtown South submarket roughly the size of Stamford, Conn.

A joint, private venture of the Related Cos. and Oxford Properties, the real estate arm of a Canadian pension fund OMERS, the project will ultimately deliver more than 18 million sq. ft. of commercial space to the market. It’s located near the extension of the No. 7 subway line and two blocks away from Penn Station, one of New York’s major transportation terminals.

Hudson Yards will contain about 10.5 million sq. ft. of new class-A office space. According to Stephen Winter, senior vice president with Related who is overseeing office leasing for the project, the average age of New York’s existing office stock is about 70 years.

The owner of the 2-million-sf.-ft. office tower at 1271 Avenue of the Americas, which was vacated by Time Inc., invested hundreds of millions of dollars in renovations, which included a new building facade. But Fiddle notes that not all Midtown office owners have deep enough pockets to invest in such a radical makeover.

Large tenants committing to new space at Hudson Yards created large blocks of “shadow space,” space that will be vacated by tenants committing to space elsewhere but have not yet moved, according to Mangru. He notes that shadow space isn’t calculated in availability figures if it’s more than 12 months from becoming available, but it impacts rental rates.

While there is some concern that Hudson Yards is decimating the Midtown office market, there has been a steady departure of Wall Street firms from the area to other New York submarkets, with 12 million sq. ft. vacated since 2013, according to a Bloomberg news report. Time Inc., for instance, moved to downtown Manhattan, Fiddle notes.

But despite large blocks of space returned to market, Midtown in the first quarter of 2019 experienced 4 million sq. ft. of leasing activity and a 7 percent increase in asking rents over the previous quarter, to $85.60 per sq. ft., according to a first quarter 2019 report from Transwestern.  The bump in rents resulted primarily due to the addition of large blocks of new construction space and renovated high-end buildings, which are asking $120 to $220 per sf. ft.—representing all-time high average asking rents, the report noted.

Rent in downtown Manhattan rose considerably over the last year, but asking rents in the area around Penn Station in Midtown South, two blocks from Hudson Yards, doubled, escalating to $91.64 per sq. ft. year-over-year in 2018, according to Fiddle. This submarket’s overall average asking rent in the first quarter of 2019 was up 8 percent over the prior year, to $83.51 per sq. ft., according to a CBRE Q1 2019 market report.

“If you had asked me five years ago if office development at Hudson Yards could be successful, I would have said no,” Fiddle says, noting that this development boosted rents at other office buildings in its path.

Hudson Square, for example, an industrial area in Lower Manhattan with “not-so-great public transit access,” according to Fiddle, is undergoing redevelopment. Nine office projects are currently underway there, including a new 1.2 million-sq.-ft. New York headquarters for the Walt Disney Company at 4 Hudson Square.

Google is also investing $1 billion in a second Manhattan campus, according to Ruth Porat, CFO and head of corporate real estate with Alphabet. The tech giant plans to double its local workforce over the next decade, adding 7,000 employees. Google has signed lease deals for several historical industrial buildings with a total of 1.7 million sq. ft. of space. These buildings will comprise the Google Hudson Campus, including 315 and 345 Hudson Street and 550 Washington Street, which are undergoing extensive renovations.