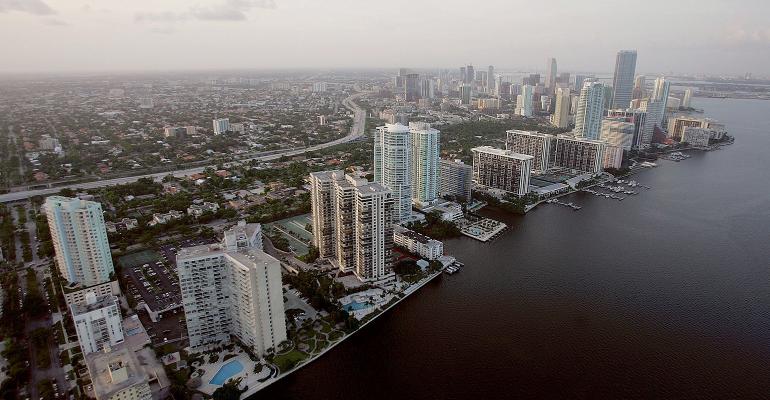 The firm said last week that it plans to partner with developer Sterling Bay to build an office tower on Brickell Bay, which spans less than a mile in the city’s business district.

(Bloomberg)—Ken Griffin's plans to shift Citadel’s headquarters to Miami from Chicago gained momentum months ago with a record-breaking acquisition on the South Florida waterfront.

Griffin and his company were behind the $363 million purchase of a 2.5-acre (1-hectare) vacant site at 1201 Brickell Bay Drive, according to people familiar with the matter, who asked not to be identified discussing a private transaction. The end buyer had been obscured since the deal closed in April, shielded by a limited-liability company with a Chicago mailing address.

The firm said last week that it plans to partner with developer Sterling Bay to design and build an office tower on Brickell Bay, which spans less than a mile in the city’s business district.

Griffin’s ambitions for Citadel’s Miami headquarters might not be limited to just one parcel, the people said.

Earlier this month, a 28-story office tower at 1221 Brickell Avenue — across the street from the 1201 Brickell Bay site — was bought for $286.5 million by another LLC, according to public filings. The authorized signatory for 1221 Brickell LLC is Randall Davis, who served the same role for the 1201 LLC. Meanwhile, the witnesses to a 1221 Brickell filing, Emma Bass and Angela Cusumano, both work at Sterling Bay.

Representatives for Chicago-based Sterling Bay and Rockpoint, which sold the 1221 Brickell building, declined to comment.

Griffin’s decision to relocate Citadel marks one of the biggest Florida expansions for a major financial firm. Miami developers lauded the move, saying that it could encourage more companies to hunt for space in the city. Goldman Sachs Group Inc. and Dan Sundheim’s D1 Capital Partners are among those that have expanded in the state in recent years.

Citadel had been looking to lease between 200,000 and 300,000 square feet (18,580 to 27,870 square meters) in Miami, according to a person familiar with the matter, who asked not to be identified citing private conversations. The company said it expects a few hundred people to be based in Miami next year.

The firm’s decision to relocate to Miami wasn’t connected to any special incentives or tax breaks, Mayor Francis Suarez said in an interview. Suarez said the city’s low tax rates for businesses are a driving force behind its growing tech and finance sectors.

Griffin, 53, who recently moved to Miami with his family, has a personal fortune of $29.1 billion, according to the Bloomberg Billionaires Index. Though he had increasingly voiced his frustrations over Chicago’s crime rate and the political leadership in Illinois in recent years, he has long been buying up real estate in Florida, where he was born and raised.

The billionaire has assembled property in Palm Beach over the past decade that’s cost at least $350 million. Some of Griffin’s traders left their Chicago and New York offices and took over the Four Seasons Palm Beach during the Covid-19 pandemic.

Griffin bought multiple sites in the Miami area more recently, including properties on exclusive Star Island in mid-2020 and a $45 million mansion in the Coral Gables neighborhood in April. He’s had Citadel representatives evaluating commercial real-estate in the city for at least two years, according to a person familiar with the matter.

Florida East Coast Realty acquired the land for about $15 million in 2000 — meaning the sale for $363 million locked in a 2,200% profit. The Hollo family had ambitions for it themselves, but it was too much money to turn away.

“We were very excited to build a project there, but you can't be obstinate,” Jerome Hollo, executive vice president of Florida East Coast Realty, said in an interview. He said he didn’t know the buyer behind the LLC, but that the price per square foot was the most ever for Miami.

“When someone offers you the right number, you take it,” Hollo said.

--With assistance from Josephine Walker.

To contact the authors of this story: Amanda L Gordon in New York at [email protected]