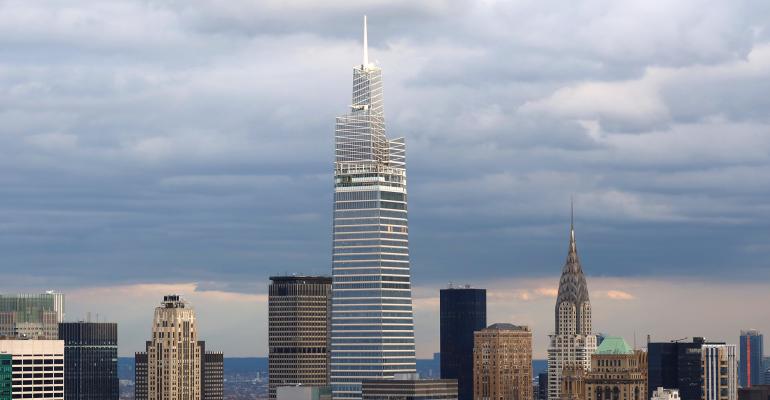 (Bloomberg)—One Vanderbilt is filling up as Wall Street prepares to return to the office after months at home.

Those deals, plus another six that the Manhattan landlord has in the pipeline, would bring occupancy at the 77-story building, which opened in September, to almost 90%, according to Chief Executive Officer Marc Holliday.

“One Vanderbilt has truly established a new class of building in New York City,” he said.

SL Green signed 11 new leases at One Vanderbilt during the pandemic. The deals come as New York’s office market is still reeling from the pandemic. Supply has hit the highest level in at least 30 years and rents continue to drop, with new leasing lagging across the city.

Still, there are signs of a revival in Manhattan as big banks and finance companies prepare to bring employees back. At Goldman Sachs Group Inc., top brass has formulated a plan to have U.S. employees back next month, with JPMorgan Chase & Co. also pushing for a return.

One Vanderbilt, where a new restaurant by chef Daniel Boulud will open this month, highlights a disparity in the New York market: Newer buildings near transit hubs are drawing interest from tenants, while older space languishes on the market.

For SL Green, rents at the company’s older buildings have slipped as much as 10%. By contrast, prices for offices have held up better at new properties, according to Holliday.

SL Green’s shares were battered last year as the pandemic hit New York, dropping 35%. The stock has bounced back a bit so far in 2021, gaining 19% through Monday.

Other tenants at One Vanderbilt include TD Securities and Toronto-Dominion Bank, Carlyle Group Inc. and Oak Hill Advisors.