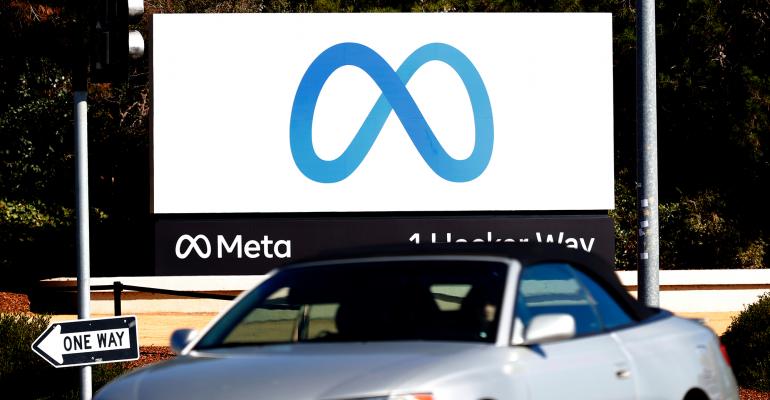 The social networking company will occupy 719,000-sq.-ft. at the former NetApp headquarters in Sunnyvale and additional space in nearby Burlingame.

(Bloomberg)—Facebook is expanding with a pair of new office leases in the Silicon Valley area.

The social networking company, now known as Meta Platforms Inc., will occupy the 719,000 square-foot (67,000 square-meters) site of the former headquarters of NetApp Inc. in Sunnyvale, California. It also signed a lease in nearby Burlingame -- bringing the total new space to more than 1 million square feet.

New York-based Tishman Speyer bought the Sunnyvale property in April for $365 million. The deal with Meta is the largest private sector U.S. office lease signed this year, the real estate firm said in a statement.

The Meta expansion comes as many employers reassess their office needs nearly two years after the Covid-19 pandemic spurred remote work. Technology companies, however, have continued to add space as they look to accommodate future growth.

Tishman Speyer has invested roughly $16 billion in real estate since the Covid-19 outbreak, about half of that in office buildings in markets such as San Francisco, Austin, Boston and Seattle.

“We were always convinced that the tech sector would maintain a strong appetite for high-quality collaborative spaces and are excited Sunnyvale will house one of the world’s leading companies,” Rob Speyer, chief executive officer of Tishman Speyer, said in an interview. “Our thesis played out even more quickly than we imagined.”

Meta leased the spaces in Sunnyvale and Burlingame to reduce employee commute times and support public transit, according to Chloe Meyere, a spokesperson for the company.

Employees are still allowed to work remotely, but will be expected to spend about half their time in offices starting next year, unless they receive permission for another arrangement, Meyere said.