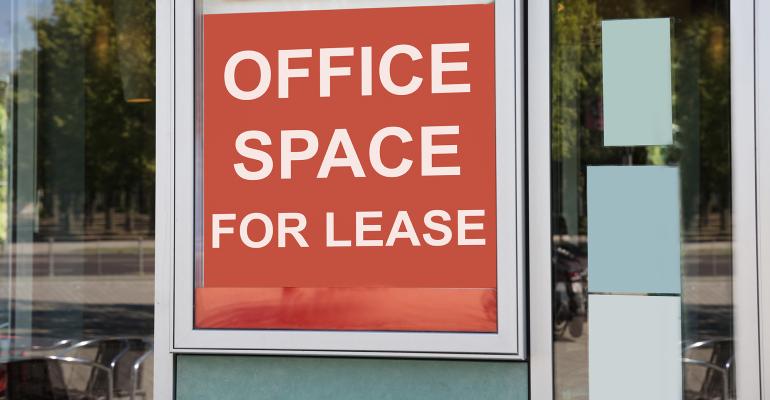 Energy Companies Are Signing New Leases. But They Are Often Reducing Their Total Office Space.

Energy tenants are beginning to enter expansion mode. But facing new hybrid schedules and higher rents, they are taking less space than before.

As geopolitical events are leading the U.S. to play a bigger role in the global oil markets, companies related to the energy industry are expanding their office space. For the moment, however, the impact on the office sector in markets with a large presence of energy firms has been modest, due to labor shortages and many people continuing to work from home, industry source say.

The war in Ukraine is having a major impact on oil and gas prices worldwide, leading the U.S. to increase its investment in both of these industries, says Richard Barkham, global chief economist and head of global research with commercial real estate services firm CBRE. For example, in June, the U.S. overtook Russia as the biggest supplier of liquified gas to Europe for the first time, as the Russian government faced new sanctions and attempted to blackmail its European clients with potential gas shortages. A recent fire at a Texas-based Freeport LNG terminal has put some brakes on production, but the impetus to develop both the U.S. oil and gas industries further is very strong right now, Barkham notes.

Related: Hybrid Work Was Supposed to Create the Best of Two Worlds. It’s Turning Out to be a Challenge for Office Tenants.

Even before the war in Ukraine began, the U.S. modestly increased its gas and oil production from where it was in 2021 as a result of higher oil prices, according to Houston-based Bruce Rutherford, international director with the global energy practice group at commercial real estate services firm JLL. However, “U.S. companies have not increased production as significantly as one might expect in response to the war due to fears of a global recession and resulting decline in global oil demand,” he notes.

The gas rig count is only increasing in places where there is pipeline capacity to move the gas to market, Rutherford says. Companies are being very cautious in their expenditure plans, as a result. “Without that capacity, no one wants to drill for new gas.”

And when it comes to oil and gas companies’ demand for office space, there are several conflicting forces in place. While some companies are looking at expansions, others are shrinking their office footprints in response to employees’ demand for hybrid work schedules. In addition, the companies themselves are reluctant to increase capital spending, Rutherford notes.

CBRE data shows that the average office vacancy in markets heavily reliant on energy firms, including Houston, Dallas and Denver, hasn’t changed significantly over the last year. What has changed are average rents, which have moved up by $3 to $32 per sq. ft. in Houston, by $6 to $32 per sq. ft. in Dallas-Fort Worth and by $1 to $32 per sq. ft. in Denver. As all three are cities with a high level of economic diversification, the increases may not be necessarily attributable to energy-related firms alone.

Still, Rutherford says that many energy industry tenants are renewing the leases they have in place to avoid having to pay higher rents in new buildings. There, the upward difference in rent might be as much as 35 percent of what these firms are currently playing, in addition to the capital needed to build out the new spaces, even taking into account tenant improvement allowances. Other tenants are deciding to sign new leases but are taking less space than they had previously to mitigate or offset the higher rent differential, Rutherfor notes.

Still, energy-centric office markets like Houston and Denver are beginning to see positive space absorption, with conditions becoming more competitive for landlords. “We have finally seen some minimally positive absorption of space in Houston the last two quarters,” Rutherford says. “But research shows that most companies are planning to sign new leases for less space than they currently have.”

For example, engineering and procurement company Bechtel recently announced its relocation to the West Chase submarket in Houston. The firm has signed one of the biggest office leases in the region so far this year, at 205,000 sq. ft., coinciding with one of its subsidiaries potentially landing a 10-year, $3 billion with the U.S. Department of Energy, after according to The Real Deal. But that’s half the space Bechtel’s 1,500 Houston employees occupied at its long-time home at The Galleria. The reduction in space was reportedly due to the firm’s new hybrid work schedule.

Meanwhile, the office sectors in cities like Dallas and Denver are more diversified, so the impact from the energy sector there is less prominent. Rutherford also says that Pittsburg has not so far gotten as much of a boost from higher natural gas prices that might be expected.

In addition, there is more sublease space coming on the market in some of these cities, weakening landlords’ ability to raise rents and forcing them to increase tenant concessions. Recent CBRE data shows that the amount of available office sublease space has declined slightly in Houston and Denver over the last year, but rose by nearly one million sq. ft. in Dallas.

In the second quarter, Houston’s office sector saw a 21.5 percent quarter-over-quarter increase in leasing volume, according to CBRE, with energy-related tenants accounting for roughly half of the quarter’s total leasing volume, at 2 million sq. ft. Firms ranging from Cheniere Energy Partners to Genesis Energy signed new leases in the city. Still, the amount of sublease space availability rose to 7.6 million sq. ft., accounting for 12.4 percent of all available office space.

“Uncertainty [because of inflation and recession fears] diminishes business activity, and that shows up in the real estate markets right away,” Rutherford says.

A ramp-up in renewable energy resources, however, might increase demand for office space in energy-centric markets going forward. Rutherford cites companies such as Shell and Exxon, which have announced their interest in renewables. “While the energy sector is not making a sizable impact in office demand in these markets at this time, we anticipate this to change in the near future as more capital is invested in alternative energy sources and CCUS (carbon capture, utilization and storage).”

Already stablished energy markets like Houston will be critical hubs for renewable energy, in Rutherford’s view, but other cities are also emerging as players in the new energy economy. JLL, for example, has identified a number of new energy markets in its most recent North American Energy Outlook report, including Austin, Miami and the Bay Area. “These are areas where innovation is concentrating, investment capital is being deployed, and there is a strong presence of research centers or institutions,” Rutherford says.