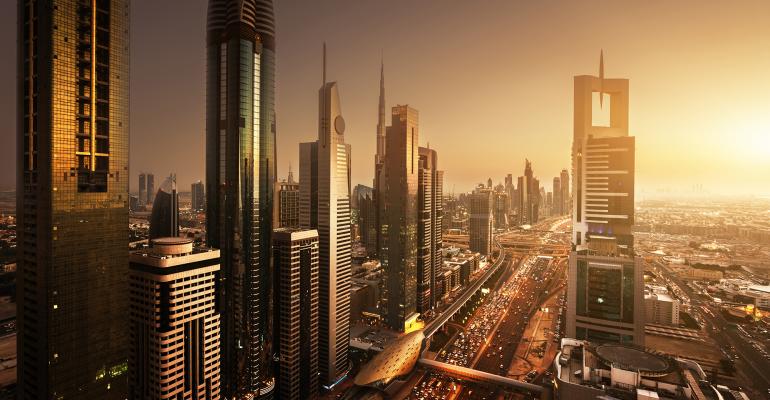 Demand for space in the skyscraper and across Dubai is surging as the emirate attracts more wealth and expats due to its nimble response to the pandemic and relatively easy access to visas.

(Bloomberg)—Office rents in Dubai are rebounding for the first time in six years, rising faster than in New York or London as global banks and businesses expand into the financial hub known for its love of glitzy construction.

The rush for office space in the emirate is on show in skyscrapers like ICD Brookfield Place, which towers 800 feet (244 meters) over the financial district. The tower opened just as the pandemic spread globally, but roughly 90% of its 1.1 million square feet of office and retail space is now taken or under offer, with a long wait list for the rest.

Demand for space in the skyscraper and across Dubai is surging as the emirate attracts more wealth and expats due to its nimble response to the pandemic and relatively easy access to visas. A growing clutch of firms are expanding in the sun-splashed business hub in favor of markets like Hong Kong and Russia, while workers are returning to offices at a particularly high rate.

“The whole market is sort of lifting itself up,” said Rob Devereux, chief executive officer of ICD Brookfield, a joint venture between New York-based Brookfield Asset Management Inc. and the emirate’s sovereign wealth fund, Investment Corporation of Dubai. “We’ve seen the return to the office much stronger than other jurisdictions” like the US and the UK, he said.

The turnaround in Dubai marks a significant shift in the city’s commercial real estate sector, which was one of the hardest hit during an oil-induced property slump in 2014.

During the second quarter of this year, the value of office rentals in city rose for the first time since early 2016. Prime office rents rose 7% in the year through June, while grade A space increased 7.2%. At the other end of the spectrum, lower grade workspace rose 3%, according to real estate adviser CBRE Group Inc.

Prime rents in the City of London, meanwhile, rose 1.4% in the second quarter, while they rose 3% or less in various parts of New York, according to CBRE.

While the pandemic has ushered in a fierce debate about future demand for office space globally, Dubai is a standout market at a time even as other financial hubs like New York and London push to lure employees back to their desks.

An average of 80% of workers are back in the office in the emirate compared with less than 40% of employees in the London City submarket, according to property broker Savills Plc. In the US, average office utilization rates were at almost 43% at the end of June, the highest level since the pandemic began.

“Dubai is different because generally people drive and most live within half an hour of their workplace so there’s a greater tolerance to commuting,” ICD Brookfield’s Devereux said.

When Dubai offices “started becoming very attractive after covid, there was hardly any new supply because very few projects were built after the 2014 market slump,” said Taimur Khan, head of research at CBRE. This became a problem because “the allocation of visas is linked to the quantum of office space occupied,” he said.

ICD Brookfield Place now has more than 100 tenants, many more than a similar-sized building in the US that would typically have just four or five, according to Devereux. The tower has 46 elevators serving 53 floors, and indoor gardens to escape the summer heat.

Away from the financial district, demand for office space is also high. In the Dubai Multi Commodities Centre, Uptown Tower -- which has over 495,000 square feet of prime office space -- has been fully-leased even before the skyscraper is completed. The free zone and government authority for commodities trading has been buoyed by an influx of crypto and blockchain businesses, as well as traders of Russian commodities.

With limited supply and many companies trying to lure workers back with more attractive office space, rental prices are unlikely to show any signs of slowing, according to Prathyusha Gurrapu, head of research and advisory at Core. About 1.5 million square feet are set to be completed this year and a further 600,000 square feet in 2023, she said.

“While new build office supply is limited, more refurbished and re-purposed office stock is expected to be brought to market over the near-term,” Gurrapu said.