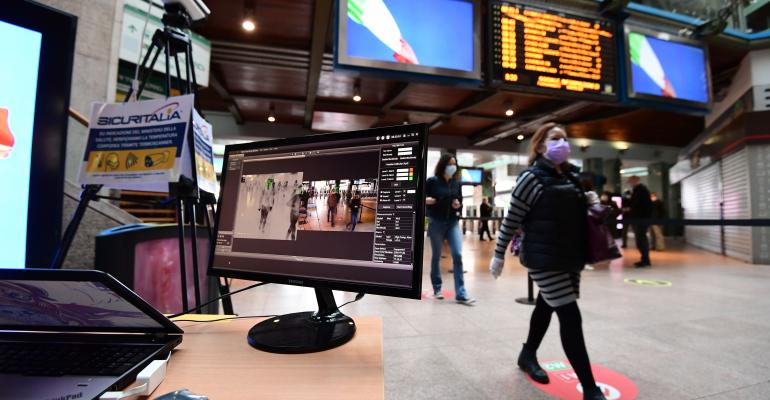 Businesses are walking a fine line between keeping people safe and protecting their privacy.

(Bloomberg)—A “Romware Covid Radius bracelet” beeps every time a Tata Steel Ltd. worker in the U.K. or a docker at Belgium’s Antwerp port is within virus-catching distance of someone. At Bouygues SA construction sites and in Sanofi and Schneider Electric SE offices in France employees enter after thermal cameras check their temperatures. Invisible lasers will manage crowds at shopping malls and transport hubs in Spain and France, and some firms will use infection-tracing lanyard devices.

As Europeans head back to work, they’re entering a world very different from the one they left. Workplaces from banks and offices to e-commerce warehouses, factories, sports clubs and airports are trying out or installing fever-testing thermal cameras, mask-detection systems and tracking software to prevent a resurgence of the coronavirus that has claimed more than 167,000 lives in the region.

The virus has opened the doors to surveillance and monitoring technologies that many fear are here to stay. While such systems have been creeping into people’s lives across the globe -- particularly in Asia, with China’s facial-recognition points system and South Korea’s invasive infection-tracking software -- the trend runs up against Europe’s much-vaunted privacy culture. Europeans trading in privacy for safety now may find the longer-term consequences unacceptable.

“The use of mass surveillance infrastructures can lead to a normalization of these highly intrusive tools, and the hasty introduction of apps, devices and cameras will, in the long term, lead to a dissolution of trust between employers and employees,” said Ella Jakubowska, a researcher at internet rights association Edri.

Businesses are walking a fine line between keeping people safe and protecting their privacy. The absence of clear guidance from European regulators is forcing companies -- who could also be on the hook if they don’t sufficiently protect workers -- to make “extremely difficult decisions,” according to Daniel Cooper, a partner at law firm Covington and Burling, who advises clients on tech regulation.

“The exposure of companies collecting that information goes up because it’s sensitive,” Cooper said. “They also have to balance the privacy rights of the people whose data they’re collecting and get that balance right and not break the law.”

About 23% of companies surveyed globally are considering workplace tracking or contact tracing to transition back to on-site work, according to a study published this month by tax and consulting firm PricewaterhouseCoopers, which is testing its own contact tracing tool in its Shanghai office.

“As lockdown is lifted, the turn to contact tracing may add a whole new layer of data being accumulated about where we go and what we do,” Andrew Pakes, research director at U.K. Trade union Prospect, wrote in a blog post Tuesday, adding that “the worry in many quarters is that we could be sleepwalking into further surveillance without safeguards in place.”

Providers of such monitoring technologies tout them as a safe way to get people back to work and revive economies crushed by lockdowns. While many acknowledge the systems aren’t foolproof, they say infection risk can be capped.

“Our bracelets are tools to keep workers safe and to increase performance,” said John Baekelmans, the chief executive officer of Rombit, the Belgian company whose bracelets will add a tracing feature in June to allow Antwerp port doctors to keep track of a possible spread in the virus.

Rombit sees the bracelets outlasting the virus as companies use them to track employees’ health and performance. The company says it will supply such devices to 300 companies in the coming weeks.

Like Rombit, Krakow, Poland-based Estimote Inc. is selling social-distancing devices to factories, research centers and hospitals, which also let them trace contacts made by any infected staffer.

The devices, attached to lanyards, buzz when workers have spent too much time near a colleague. Employees developing symptoms or testing positive can press a button on the gadget to notify the company, allowing it to trace all the people they’ve been in contact with.

“It’s in our DNA to come close” to other people, said Estimote CEO Jakub Krzych, adding that the devices alert users to those habits, keeping the spread of the virus in check.

Herta Security in Barcelona is developing both mask-detection technology and facial recognition for touch-less access in workplaces, including for a global retail company that’s considering using it in its offices in Europe and Latin America, according to Laura Blanc Pedregal, Herta’s Chief Marketing Officer.

Privacy advocates are alarmed. Thermal cameras could be seen as an invasion of privacy, said Rob van Eijk, managing director for Europe at the Future of Privacy Forum, a nonprofit think tank.

“It would pressure individuals with relatively higher body temperatures to disclose or divulge, likely against their will, their personal health information that might be unrelated to Covid-19 or other respiratory viral infections,” he said.

In Europe, where breaching data protection laws can result in a fine of as much as 4% of annual global revenue, companies typically wouldn’t link temperature readings to names or store the information. Still, fever readings wouldn’t be difficult to trace back to an individual, said Covington and Burling’s Cooper.

For now, the checks are being taken in stride. Consider the employees of Bayer 04 Leverkusen, the German soccer club, which invested in five Dermalog thermal cameras. When the Bundesliga became the first major soccer league to resume playing last weekend, the club was ready. It had been scanning its players when they came in for training.

In late April, while much of Germany was sheltering in place, professional soccer player Leon Bailey stood at the entrance of the club’s training facilities to have his temperature taken. The camera zeroed in on his forehead to read a temperature of 37 degrees Celsius. No fever. He passed through the arena’s gates and joined his teammates for practice.

“They see it’s for their own safety,” said Dr. Karl-Heinrich Dittmar, Bayer Leverkusen’s medical director, in an interview. “Nobody wants to become ill.”

--With assistance from Sarah Syed and Stephanie Bodoni.

To contact the reporters on this story: Natalia Drozdiak in Brussels at [email protected];

To contact the editors responsible for this story: Giles Turner at [email protected]