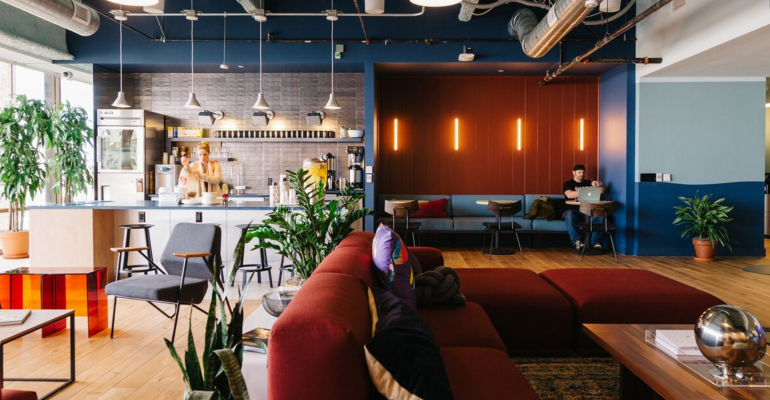 A real estate downturn could cripple the growing co-working industry.

Some commercial real estate observers might be a little worked up about how office REITs might be affected by WeWork and its co-working brethren. Yet is that consternation really warranted?

To be sure, WeWork—the giant of the nascent co-working sector—is gobbling up office space at a rapid clip around the country. Recent data from research firm CoStar Portfolio Strategy LLC shows WeWork has claimed more than 12.5 million sq. ft. across the U.S., with the New York City market representing 37 percent of its nationwide footprint. An example of WeWork’s office deals: In mid-October, it signed a 138,563-sq.-ft. lease in New York City with office REIT SL Green Realty Corp.

Yet WeWork and its co-working rivals still account for a tiny slice of the U.S. office market. A February 2018 report from real estate data provider Yardi Matrix found that in 20 major markets, co-working consumed 26.9 million sq. ft. of office space—or just 1.2 percent of all office space in those markets.

So, is co-working—and namely WeWork—a real threat to office REITs? Or is the whole co-working trend just a blip on the REITs’ radar? Opinions on this subject are all over the map.

WeWork is the Tesla of the office business, viewed as a curiosity, a conundrum and a quandary, according to Alex Pettee, founder of Rowayton, Conn.-based investment adviser Hoya Capital Real Estate LLC.

“On one side, you have proponents who think WeWork will see stratospheric growth and completely topple the traditional office business,” Pettee says. “They see the office business as bound for disruption on a massive scale, and that given the choice, businesses both large and small will opt for an outsourced, shorter-term rental structure to replace their traditional in-house, long-term model.”

Simultaneously, some skeptics believe WeWork is simply putting “makeup on the pig” of an otherwise dull business—flexible workspace—that’s been around for decades courtesy of companies like Regus, according to Pettee. He adds that those naysayers figure WeWork and other co-working upstarts are destined for a wake-up call once venture capital and leasing activity dry up at the outset of an economic downturn.

In Pettee’s view, the reality lies somewhere between those two scenarios. Citing research from real estate services firm JLL that shows co-working made up two-thirds of net office absorption in the first half of 2018, Pettee says office REITs and other landlords should keep an eye on WeWork and its challengers, but they shouldn’t fret about tenants being yanked away from long-term leases.

“While the conventional narrative has seen WeWork as a direct competitor to office landlords, it’s clear that, at least for the foreseeable future, WeWork has been nothing but good news for office owners. The long-term effects, however, are less clear,” Pettee says.

Over the next five years, co-working will be “unambiguously positive” for office REITs, particularly those with holdings in gateway markets like New York, San Francisco and Seattle, according to Pettee. He envisions that among office REITs, five of them—Alexandria Real Estate Equities, Boston Properties Inc., Kilroy Realty Corp., SL Green and Vornado Realty Trust—will benefit the most from a gateway surge in co-working.

During an August 2018 earnings call, Owen Thomas, CEO of Boston Properties, said that WeWork is a key customer, but added that the co-working behemoth had accounted for only 0.9 percent of income for the Boston-based REIT.

“We are selectively talking to them about additional stores that they would put in our buildings. For the right building and for the right situation, we would certainly consider expanding our relationship with WeWork,” Thomas said this summer.

“They went there for short period of time and they outgrew it, or they didn’t like it or whatever,” Klinck said. “So, I don’t think [co-working is] for everybody, but certainly it’s something that’s a trend that’s growing—growing quick—and it’s something we’re closely watching as well.”

Office REITs generally lack enough exposure to “meaningfully benefit” from the growth of co-working, according to Danny Ismail, an analyst who covers the office sector for Newport Beach, Calif.-based research firm Green Street Advisors, although he does note that office REITs with a heavy presence in gateway markets would hold more of an edge.

“Co-working companies are an interesting mix of competitor, customer and partner for office REITs,” Ismail says.

While the competitor and customer aspects are obvious, the partner component remains iffy, he notes. Some office REITs are signing traditional leases with co-working providers, while others are launching their own co-working concepts and still others have teamed up with co-working businesses to manage space.

“It’ll be interesting to see when the dust settles what strategy wins out,” Ismail says.

A November 2017 report from Green Street singles out the outsourcing of large chunks of headquarters and regional offices on the part of large corporate tenants as the “most ominous prospect” for office REITs and other landlords.

But the report goes on to dismiss a forecast by JLL that 30 percent of corporate office space could be leased through co-working-style arrangements by 2030. The Green Street report paints this prediction as “extreme,” since that circumstance would trigger a “seismic” shift in the office sector.

As it stands, the report says, some office REITs and other landlords have adopted various approaches to the co-working boom, from full-on collaboration with co-working operators to complete avoidance of co-working leases. The report suggests that perhaps 5 percent to 10 percent of rentable office space be set aside for co-working, with a keen focus on leasing to the most creditworthy co-working operators.

Through 2030, Green Street sees co-working being perhaps a 2 percent to 3 percent drag on overall office demand.

However, it can’t be overlooked that WeWork offers an “occupancy solution,” not just co-working space, says Steven Kurtz, managing director of the valuations and business analytics practice at Chicago-based accounting and consulting firm BDO USA LLP.

“They are minimalizing the traditional barriers to moving to a new space and providing these tenants with the opportunity to take significant blocks of space while spending far less time and money,” Kurtz says. “Additionally, WeWork and other co-working companies offer turn-key space with less lead time than traditional office owners.”

In fact, John Provenzano, a director in BDO’s valuations and business analytics practice, believes that the co-working model will continue to extend beyond the current crop of start-ups and freelancers to major corporate users, and that more co-working providers will enter the sector.

But as other observers emphasize, Kurtz says an economic downturn could cripple co-working operators and potentially hurt office REITs and other landlords that have co-working tenants.

“A downturn will probably not kill co-working, but it would certainly weed out the weak ones,” Kurtz says.

How much damage would that do to office REITs and their rivals?

“REITs tend to be more risk-averse when it comes to tenancy, and we can see in the market that they have taken limited advantage of the co-working trend,” Kurtz says. “At the end of the day, co-working is not likely to have a large impact on REITs for the foreseeable future.”