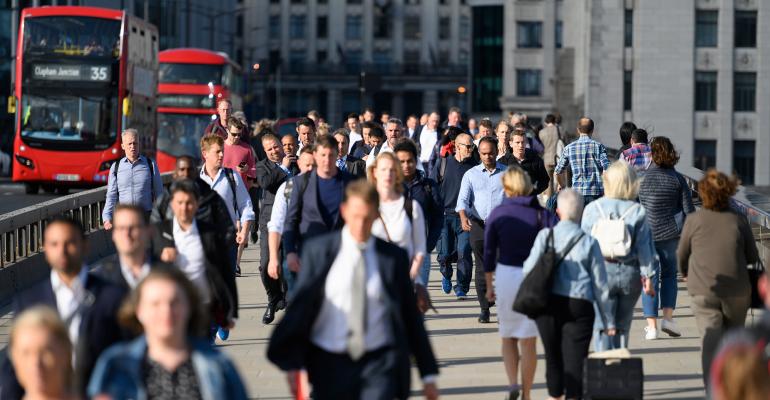 The City of London Finally Gets Back to the Office

More and more employers are prompting staff to come into work for at least a few days a week.

(Bloomberg) -- On the lower floors of HSBC Holdings Plc’s Canary Wharf headquarters, the desks are filling up.

Traders, salespeople and close support staff not currently in the office have been told they are expected to be at their workstations on the second to fourth floors of the tower five days a week, according to people familiar with the matter. The only exceptions will be for domestic emergencies and unavoidable family commitments.

It's a sign that, after several false starts,  the finance industry's return to the office is at last gathering pace. At times over the past two weeks, trains have been at their busiest since the pandemic broke out, while the streets have been thronged with workers again. The City of London and Canary Wharf might not be as they were before the pandemic, and staff may only be coming in for a few days a week -- but a turning point has been reached.

Citigroup Inc.’s skyscraper hit more than half of typical pre-pandemic attendance in early September, while footfall at JPMorgan Chase & Co. has risen to 40%, compared to about a quarter in August, according to people familiar with the matter.  Occupancy at Goldman Sachs Group Inc.’s office is currently at around half and the proportion is continuing to rise, another person familiar with the matter said.

While New York’s reopening is being stymied by a surge in cases of the Delta variant of the virus, London’s own spike receded over the summer. Though daily Covid infections remain relatively high in the U.K. -- with more than 200,000 new cases reported last week -- the government regards the current pressure on the NHS as manageable and is touting a new phase of the pandemic with more individual choice and freedom.

Buoyed by that messaging and the start of the school term, more and more employers are prompting staff to come into work for at least a few days a week. These new arrivals are increasingly visible out on the warren of streets that make up the heart of the City of London, home to about 542,000 jobs.

On a midweek lunchtime at Porterford Butchers, a favorite takeaway spot, the queue for its short-rib beef baguettes snaked down Watling Street past vest-wearing lager drinkers in the late summer sun. On the other side of the Bank of England, the Square Mile’s insurance district is also buzzing.

At Lloyd’s of London, Chief Executive Officer John Neal has been cheered by the signs of life in the area, saying the insurance market’s headquarters is now at its busiest since the U.K.’s first lockdown in March 2020.

“There is still a long way to go, but September has really felt like it’s back to school,” said Neal. “We hope to see a continued steady and incremental rise as we move into autumn.”

Across the City of London, foot traffic was estimated to be 39% of the pre-pandemic norm on Sept. 15, according to an analysis by Orbital Insight, which monitors activity levels through satellites and mobile phone data. In Canary Wharf, office worker footfall is at 36%. Both are the highest since the days before the pandemic.

As attendance rises, in-person meetings are starting to make a comeback. Investors at firms including Allianz Global Investors, Legal & General Investment Management and Church House Investment Management have said companies were beginning to offer them the choice between face-to-face and video meetings after virtual pitches for initial public offerings became the norm during the pandemic.

Business is on the up at The Ned, the City of London offshoot of Soho House owner Membership Collective Group Inc. Last week the hotel-cum-restaurant-cum-membership club recorded weekly sales of more than 1 million pounds ($1.4 million) for the first time in 18 months, according to Gareth Banner, its managing director.

“There’s an element of FOMO,” said Banner, referring to the fear of missing out. “If one broker is entertaining a client and the word on the street is that Company X is doing in-person events, others need to feel that they are not dropping off the radar and they’re entertaining and engaging their clients in the same way.”

Sue Knowler, whose family own and run Sweetings, the small seafood restaurant that’s a favored lunchtime haunt for many City financiers, also said business was on the up even though covers are still running at half their pre-Covid levels.

That uptick is good news for the vast urban economy of restaurants, shops and bars for so long underpinned by the half-a-million commuters that used to enter the City every weekday.

Some office environments are also looking more like normal. While masks remain a staple inside the buildings of most major banks, some are starting to roll back their pandemic policies -- and perks.

Goldman Sachs dropped social distancing rules in its London office this week. It is also ending free meals in the office from Sept. 20 “to encourage support of the local restaurants and businesses reopening around us.”

That’s not to say workplaces will revert to 2019, particularly outside those offices housing traders and dealmakers.

Outside of HSBC’s trading floor, hybrid working is in full flow for most of the bank’s London-based employees. Even managers such as Chief Executive Officer Noel Quinn and Chief Financial Officer Ewen Stevenson are hot-desking on a newly renovated floor after the bank ripped up its executive suites, including Quinn’s corner office.

Lloyd’s CEO Neal said that with many firms looking to downsize their office presence in the City, the insurance market had to adapt.

“Whether physical or virtual, our goal is to ensure Lloyd’s continues to be the space to meet, convene and transfer risk,” he said.

And with plenty of unknowns lurking, a wholesale return to full occupancy remains a distant prospect for city centers across the world. Just 1% of workplaces were more than half full in the middle of September, according to an analysis by workplace optimization firm Freespace, which has more than 100,000 sensors in offices across the world.

It means even those helping underpin finance’s latest return to the office can’t say what their workplaces will look like in future.

“We’re just trying to encourage people back,” said Sam Smith, CEO of FinnCap Group Plc, noting about 80% of the London-based broker’s staff opted to return since she asked employees to come in on Tuesdays, Wednesdays and Thursdays.

“What we’ve learned in the past 18 months is that you can’t really plan.”

--With assistance from Swetha Gopinath.