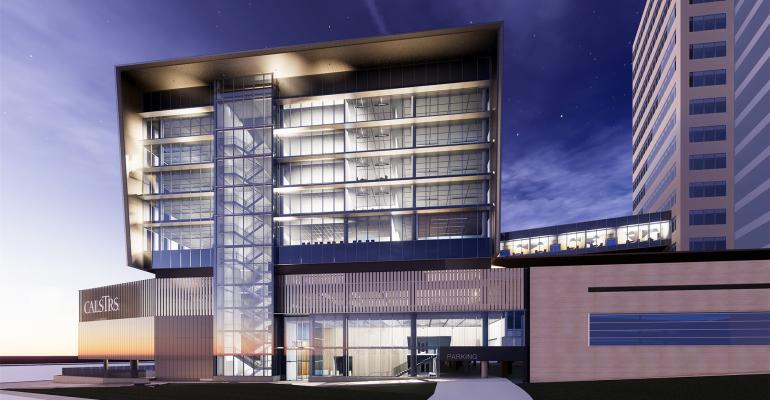 The public pension, the second biggest in the nation, is offering $15.7 million in tax-exempt bonds via auction Wednesday. Calstrs’s new headquarters is considered an investment for the pension, which has a prodigious $297.6 billion under management.

(Bloomberg) --The California State Teachers’ Retirement System is selling more municipal debt for a new office building that will likely find good demand despite the shift to remote work.

The public pension, the second biggest in the nation, is offering $15.7 million in tax-exempt bonds via auction Wednesday. It is the fund’s second foray into the municipal market since it sold $272.6 million of tax-free debt in 2019 for the project.

While the remote work shift has hollowed out economic cores in cities such as San Francisco and as rising interest rates and expectations of recession hit commercial property values, Calstrs’s new headquarters is considered an investment for the pension, which has a prodigious $297.6 billion under management. It also helps that municipal-bond investors are largely unflappable when it comes to the impact of working from home on credit markets.

“The additional debt and related debt service are quite modest in relation to Calstrs’s capacity to repay,” said Karen Ribble, senior director at Fitch Ratings, which grades the new bonds AA, the third-highest rank.

The fund is building a 10-story tower for a new headquarters, designed to meet high environmental standards, connected to its current West Sacramento facility. Construction started in 2019 and the 510,000 square-foot building was supposed to be finished in July. But the project ran into “unusual circumstances,” according to the bond documents. Reasons for the delay include the Covid-19 pandemic and difficulty getting building permits from the fire marshal.

Now the project costs $318.5 million — about 6% more than earlier estimates — and is expected to be mostly complete by the end of March 2023.  When employees start moving into the new office building later next year, there will be fewer people daily than originally envisioned since Calstrs adopted a “hybrid” work schedule in April. That arrangement, in which employees are expected to work in the office two or three days a week, will continue next year, said spokesperson Mindy Selby by email.

“If it’s solely based upon the revenues of a project that is underutilized, then that would be a credit risk and something to really be concerned about,” said Terry Goode, a senior portfolio manager at Allspring Global Investments, referring to the bond offering. “This is not really dependent on the actual project revenues.”

Calstrs also plans to lease some of the floors of its existing 17-story building. Office vacancies in the Sacramento area stood at 18.8% as of Sept. 30 and are likely to increase to 19% by the end of the year amid economic uncertainty, according to research from commercial real estate firm Jones Lang LaSalle Inc.

“It’s among the most desirable office spaces available for lease in the greater Sacramento area, and we have already begun showing the space to interested parties,” said Selby.

The tax-free bond offering comes amid sluggish sales from municipal governments, which means there will be more interest from potential buyers, especially in high-tax states such as California, who are looking to shelter investment income from taxes.

“Even though it’s a small issue, it’s going to get strong demand,” said John Ceffalio, senior municipal credit analyst at CreditSights Inc. “Bondholders just care that Calstrs is using the facility and that funding levels have generally been improving over the last 10 years.”

Calstrs is 73% funded, according to its latest report. It’s on track to be fully funded in 2046, after funding increases began to be phased in 2014.

S&P Global Ratings senior director David Hitchcock pointed to the fact that the system plans to manage more investments internally instead of relying on outside firms. S&P grades the new bonds A+.

“While there might be fewer people in the office, there will be a larger workforce, which could potentially require more seats in the office,” he said.

Indeed, Calstrs has already approved adding 109 positions over the next five years with more to come, said Selby. About 1,200 employees are expected to use the facility, which includes a child-care center, a cafe and additional parking. The new headquarters “will provide us the space to expand over the next three decades,” she said.

--With assistance from John Gittelsohn.