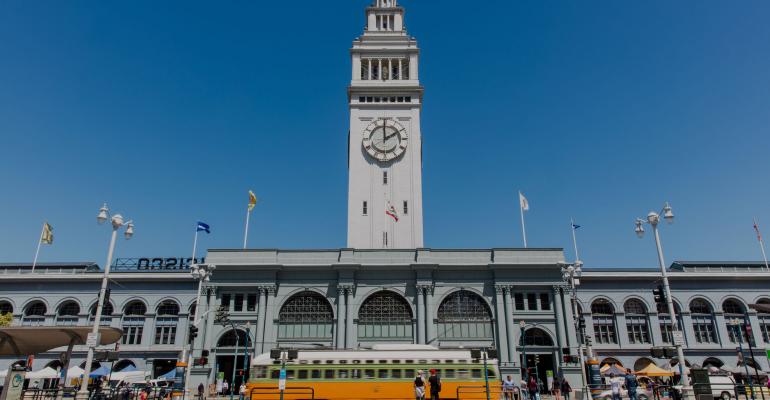 Marketing one of the last properties from that 2007 deal signals the end of one era and the early stages of the next, as technology companies and other tenants seek more flexible leases and better amenities.

(Bloomberg)—The largest real estate buyout of all time is set for its final chapter as Blackstone Group LP moves toward selling San Francisco’s landmark Ferry Building and two other properties.

The waterfront icon, with its soaring clock tower modeled on the 12th-century Giralda bell tower in Seville, will go on the sales block in coming weeks, a decade after Blackstone’s $39 billion purchase of Equity Office Properties Trust, said Christine Anderson, a spokeswoman for the private equity firm.

Marketing one of the last properties from that 2007 deal signals the end of one era and the early stages of the next, as technology companies and other tenants seek more flexible leases and better amenities. With the sale of the Ferry Building, along with two other big properties and a handful of smaller holdings, Blackstone stands to triple its $3.8 billion equity investment, said people familiar with the matter, who asked not to be identified because the information is private.

For Blackstone’s investors, the Equity Office buyout has been a saga of hurry up and wait. Besides its sheer size, the deal commanded headlines when Blackstone quickly flipped three-fifths of the assets to pay down debt.

The initial offloading of risk was dubbed “Mr. Toad’s Wild Ride” by Roy March, chief executive officer of commercial real estate broker Eastdil Secured, which Blackstone hired to line up buyers. The sale frenzy saddled many buyers with debt they couldn’t refinance when the credit crisis spread worldwide. Even Blackstone had to negotiate an extension of Equity Office’s debt in 2010 to give itself breathing room.

Equity Office will continue to exist after the Ferry Building sale and that of the two other remaining major properties. Blackstone has established Equity Office as an ongoing platform to manage its more recent and future purchases of office properties. The buyout firm separated its stake in the buildings it bought in 2007 from Equity Office, which has continued to oversee them.

The company in May named a new chief executive officer, Lisa Picard, who joined the company as chief operating officer last year from Skanska AB’s Seattle unit, where she oversaw developments.

One of Picard’s challenges is adapting Equity Office’s portfolio of office buildings to tenants’ increasing appetite for amenities. Real estate startups such as WeWork Cos., which sublets space while offering easy exits from leases, attract entrepreneurial tenants with millennial-friendly perks including free energy bars and beer.

The Ferry Building, a gourmet food court and office center as well as a transportation hub for commuters crossing San Francisco Bay, is expected to fetch more than $300 million.

The three properties make up most of the $2 billion of assets from the 2007 deal that remain to be sold, said Jon Gray, the firm’s real estate chief. Blackstone plans to auction the Santa Monica and Boston properties by the end of the year, he said.

In an interview at Blackstone’s New York headquarters, the 47-year-old Gray, who oversees $102 billion in client capital targeted to real estate for the alternative-asset giant, said Equity Office hasn’t been an easy ride.

“It’s fair to say it was a harrowing time along the way,” said Gray, who declined to specify the profit. “It was a journey, not a straight line.”

Office prices plummeted more than 45 percent as the financial crisis deepened, according to research firm Green Street Advisors LLC. Blackstone’s initial $3.5 billion investment in Equity Office shrank to less than $2.5 billion on paper in early 2009. According to Gray, Blackstone’s flipping $27 billion in assets within five months of the buyout’s closing, when prices were near a peak, saved its skin, as did the fact that the debt was covenant-free. Just as crucial were the assets it kept -- about 140 prime properties located chiefly in Boston, New York, Northern California and west Los Angeles, many of which it refurbished.

Blackstone eventually raised its investment to $3.8 billion when it snapped up Equity Office debt at the market’s nadir. Starting in 2013, Gray and his team auctioned off the portfolio bit by bit.

“We didn’t anticipate the coming storm” in 2007, Gray said. “We just knew we needed to sell down to de-leverage and get our costs basis down, and we paid reasonable value in a period when prices were a bit insane.”

He added, “When the sun finally came back out, we were patient about selling.”

Blackstone’s massive gain as the market rocketed back, coupled with more than $13 billion in profit from Hilton Worldwide Holdings Inc., which it bought the same year as Equity Office, propelled Blackstone’s growth to become the biggest private equity investor in real estate.

Considering that in 2007 Blackstone had only one-fourth of the $368 billion in assets it manages now, the twin bets were outsize, Gray allows.

“We took an awful lot of risk,” he said. “But with our cost basis and capital structure, we thought it was manageable.”

Gobbling up a mass of assets, fixing them up and auctioning the parts remains a mainstay of Blackstone’s play book. Gray pointed to the firm’s $8 billion takeover of BioMed Realty Trust Inc. in 2016 as the latest example.

“Big, concentrated bets are our strength,” he said, “and we’ll continue to make them.”