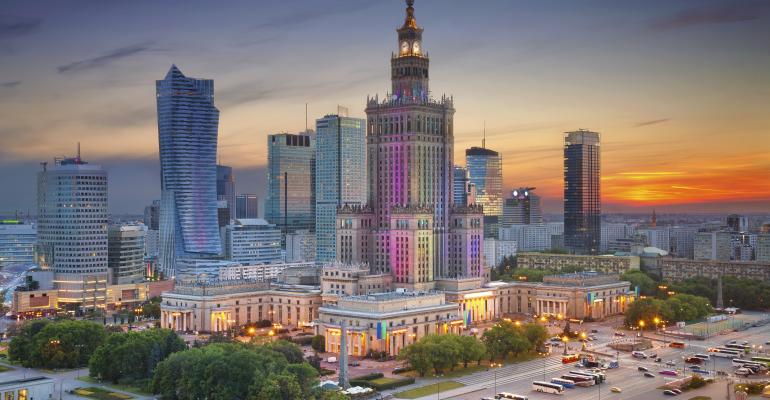 That trend is most visible in Warsaw, whose flat terrain and heavy destruction in World War II left ample room for new high-rises.

(Bloomberg) -- Czech tycoon Radovan Vitek is making a big bet on the booming real-estate market in Warsaw, which offers some of the highest returns in Europe and more room to grow than his home country.

Vitek’s CPI Property Group SA, already the biggest office landlord in Prague and Berlin, has since October bought five buildings in the Polish capital and a stake in local competitor Globalworth Real Estate Investments Ltd. The group, among the region’s most active issuers of foreign-currency bonds, wants to keep expanding in the city of 1.8 million people that’s becoming the financial and services hub of the European Union’s fast-growing eastern flank.

“Our ambition is to be number one in Warsaw,” CPI’s Chief Executive Officer Martin Nemecek said in an interview at the company’s headquarters in Prague.

While CPI is still facing legal challenges, it’s managed to maintain access to cheap funding on international bond markets. It’s investing the proceeds in central and eastern Europe, where yields on commercial real estate can be twice as high as in Germany or Austria. Faster economic growth and the increasing role of services and technology keep boosting demand for offices.

That trend is most visible in Warsaw, whose flat terrain and heavy destruction in World War II left ample room for new high-rises. The city has more plots ready for development and looser zoning regulations than hilly Prague, where authorities limit the height of new buildings to protect its UNESCO World Heritage status and where the building-permit processes may easily take a decade.

CPI’s Nemecek says the abundance of new projects has made the Polish capital the “destination of choice” for international companies, including those moving their back offices away from London after Brexit.

While Prague is wealthier and attracts far more tourists, the bureaucratic hurdles faced by builders are limiting the influx of office jobs. Nemecek hopes that the Czech capital’s recently elected administration will change the course and help expedite stalled projects, including plans to turn abandoned rail yards and factories near the city center into workspaces, shopping malls and apartments.

“We are still big believers in Prague, which might be considered a nicer city and a more stable property market than Warsaw,” said the CEO. “But the building activity is very limited, so there’s not enough product available and we have too look elsewhere if we want to grow.”

CPI, which is registered in Luxembourg and listed in Frankfurt, said in a statement on Monday the expansion in Poland helped increase its assets 30% last year to 10.7 billion euros ($11.6 billion). The company expects the ongoing acquisitions will raise the net loan-to-value ratio slightly above 40% from 36% at the end of 2019.

Chief Financial Officer David Greenbaum says the increase in indebtedness is “temporary” and the office purchases will make CPI stronger by diluting the share of retail space, perceived as riskier, in its portfolio. As one of the region’s biggest issuers of corporate bonds in foreign currencies, it has a long-standing goal to improve its credit ratings from the second-lowest investment grade it has at Moody’s Investors Service and S&P Global Ratings.

“We’re very focused on the credit ratings,” Greenbaum said during the same interview. “All the agencies are giving us the benefit of the doubt that we will continue to follow through on our ratings targets.”

CPI’s notes got rattled in April 2019 by a more than $1 billion fraud lawsuit filed by U.S. hedge fund Kingstown Capital Management LP. Both Vitek and his company have repeatedly contested the allegations.

The bonds have since fully recovered and are now trading at record-low yields, while CPI, also known as CPIPG, has sold international debt in euros, pounds, Hong Kong dollars and Singapore dollars. Earlier offerings were in U.S. dollars, yen, and Swiss francs.

“Since the New York lawsuit was filed, CPIPG has successfully issued nearly 2 billion euros of hybrid and senior unsecured bonds in multiple currencies, which suggests investors are more focused on CPIPG’s fundamentals,” the CFO said. “On the other hand, I am sure our credit spreads would be tighter if these litigation matters were resolved.”

To contact the reporter on this story:
Krystof Chamonikolas in Prague at [email protected]