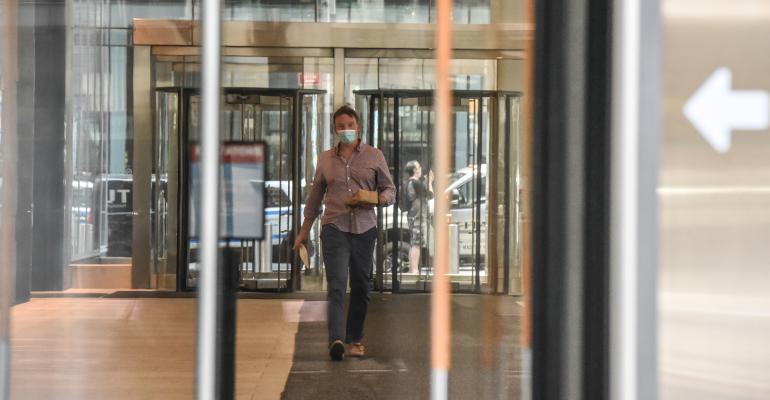 Battered U.S. Office Market Perks Up with Workers Trickling Back

National demand for offices jumped 28% in March from the prior month and is now just 9% below pre-pandemic levels.

(Bloomberg)—After a number of false starts over the past year, corporate America is finally bringing workers back to the office.

The widening availability of vaccines means that employers are setting plans for returns. Exxon Mobil Corp. said on Tuesday that its Houston-area workers would be back full-time in May. JPMorgan Chase & Co., meanwhile, is opening its U.S. offices next month, with its full staff expected back in July on a rotating basis.

Already, offices are slowly starting to fill up across the country as social distancing-rules ease and vaccines accelerate, bringing optimism that more Americans will soon be able to resume their pre-pandemic daily life. About 26% of office workers in major cities were back at their desks as of April 21, the highest share in about five months, data from security company Kastle Systems show.

Companies that postponed searches for space last year are back in market, looking to take advantage of cheaper rents and concessions from landlords eager to fill vacancies. National demand for offices jumped 28% in March from the prior month and is now just 9% below pre-pandemic levels, according to property-data firm VTS, which tracks office tours.

“People are feeling really good about where we are in the world from the economy and getting Covid under control,” said Ryan Masiello, chief strategy officer at VTS. “That’s a big part of what’s driving people back into the market.”

Major office markets including New York and San Francisco were hit hard by Covid-19. Companies been reevaluating how much space they need and looking to sublease offices in a bid to cut costs. That could weigh on rent as new projects open up and add supply.

Still, there are signs that offices are bouncing back. In March, demand was up 365% in Seattle compared to the end of last year, with a 276% gain in San Francisco. In New York, it jumped 191%, according to VTS. The rapid increase signals that more companies are planning imminent returns to work, the data firm said.

The Seattle area, which is home to tech titans such as Amazon.com Inc. and Microsoft Corp., is seeing demand for new offices from companies that are already in the market as well as Bay Area tech firms that are looking to set up satellite offices.

That’s helped push demand for offices up 19% above the historical average, the only market in the U.S. where that measure has turned positive, according to VTS.

This week Apple Inc. said it had recently opened an office in the city’s South Lake Union neighborhood for its 1,000 employees in the region and plans to double that headcount.

“We’ve seen a huge influx in activity over the last three or four months,” said Cole Roberts, research director in Seattle for commercial real estate brokerage JLL. “All these groups that had put off leasing, now they’re all active.”

The return to offices varies widely across the country. Cities in Texas, where most virus restrictions are lifted and people are more likely to drive to jobs, have the highest share of people back, according to Kastle, which tracks security access at its buildings. About 40% of workers in the Dallas, Houston and Austin metro areas have returned, the company’s data show.

New York and San Francisco, densely populated centers dependent on public transit, have the lowest rates of occupancies among the 10 regions Kastle measures, at 16% and 14%, respectively.

But even in the Bay Area, where tech companies have widely embraced remote work, there are signs of a revival. Facebook will reopen its Silicon Valley offices in May at 10% capacity. Salesforce.com Inc., San Francisco’s largest private employer, is opening its headquarters tower to a limited group next month.

In New York, demand for space is still 13% below the two-year average prior to the pandemic, according to VTS. But as JPMorgan and other Wall Street firms eye a return to Manhattan, the market is starting to bounce back.

“We’ve definitely seen a significant increase in tours since the end of last year and every week it seems to be increasing,” said Bill Rudin, chief executive officer of Rudin Management Co. “We’re feeling the energy coming back into the city which will be reinforced as more people come back to work.”