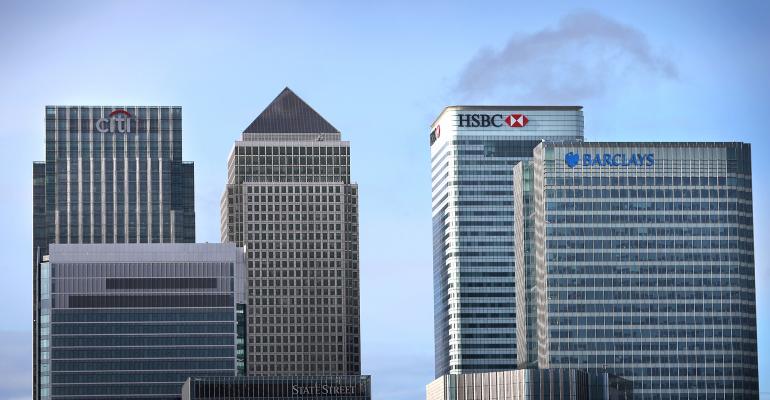 The pandemic has given banks further impetus to downsize and preserve cash.

(Bloomberg) -- The giants of Wall Street and European banking are giving up their stronghold on London.

In the coming months alone, Barclays Plc may ditch its investment bank’s headquarters in the capital; Credit Suisse Group AG is offloading nine floors of office space; and Morgan Stanley is reviewing its entire London footprint.

And all of those moves were planned before the coronavirus hit. Now, with thousands of job cuts likely to follow what’s forecast to be the worst recession in three centuries, the tenants of the glass and steel towers that dominate the City of London and Canary Wharf may face an even bigger retreat.

“Larger banks are clearly a higher risk for landlords,” said Rogier Quirijns, head of European real estate at Cohen & Steers Inc., who oversees more than $2 billion of property funds. “For London, there are the threats of recession and a possible no-deal Brexit to deal with, and I expect Covid-19 will most likely accelerate those risks.”

The pandemic has given banks further impetus to downsize and preserve cash after already spending a decade quietly offloading space as jobs vanished in the wake of the financial crisis. In the past nine years, their London footprint has been slashed by about six million square feet -- or the equivalent of a dozen Gherkin skyscrapers, according to broker CBRE Group Inc.

Layoffs accelerated in the first quarter, with headcount across the 12 biggest investment banks dropping 5% -- the steepest decline for that period in at least six years, according to Coalition Development Ltd. Much of that’s been driven by troubled European lenders, which were already shrinking long before the virus struck, according to Amrit Shahani, head of research at Coalition.

Shahani predicts that by the end of this year, the continent’s banks could have 20% fewer staff than at the start of 2019.

As well as job losses, the future of the office itself is on lenders’ minds. It’s taken the arrival of a deadly pandemic to convince bosses that working from home can be both effective and relatively easy, and that’s provided a timely opportunity for an industry neck-deep in cost rationalizations.

Bank executives from Barclays chief Jes Staley to Morgan Stanley boss James Gorman have even begun to question whether the corporate headquarters may become outdated. UBS Group AG has said that as many as a third of its employees could work remotely on a permanent basis.

For many banks, “their five-year plan was to cut their floor space by 20% pre-Covid,” said Mat Oakley, head of commercial research at broker Savills Plc. “So this is not Covid-related -- it is just suddenly they find a way of achieving that plan because of Covid.”

Firms in central London have sought to offload almost one million square feet of office space since the lockdown began in mid-March, with about 16% of that coming from banks, according to latest data from Savills. Just over a third of offerings through mid-June were directly in response to the virus.

Real estate bosses are playing it typically cool. While lockdowns across the world threaten office values and many rental payments will be missed, they’re still counting on global firms chasing trophy headquarters. The industry is also betting that being home-bound has made people appreciate human interaction even more.

After almost three years of weighing up its options, Barclays is likely to step up plans to vacate its investment bank headquarters, according to people familiar with the matter. The offices are in Canary Wharf, the glitzy east London financial district that’s come to rival the City of London since its birth in the late 1980s.

Broker Jones Lang LaSalle has been hired to sublease the Barclays space, so the investment bankers can shift to the bank’s nearby corporate headquarters, said the people, asking not to be identified because the details aren’t public. The potential move isn’t related to Covid-19, they said.

Nearby Credit Suisse is looking to sublet up to nine floors of its London base, according to a listing from broker CBRE. With headquarters just across the road, Morgan Stanley has hired broker Cushman & Wakefield Plc to undertake a review of its entire London real estate footprint, said a person familiar with the matter.

“Some businesses are looking at space they have leased and are yet to occupy and considering whether to sublet a floor or two,” said Savills’ Oakley. “Nobody was ever betting on banking being a major driver of office leasing over the next five years.”

The old guard is ceding ground. In the five years through 2019, banking and financial firms accounted for about 19% of new office leases across central London, down from 23% in the first half of the decade, according to Cushman & Wakefield data. Those signed by media and technology companies and serviced office firms, however, went up to 41% from 27% in the same period.

Despite its well-known travails of recent years, serviced office provider WeWork has become the no. 1 private-sector office occupier in central London. In the City, meanwhile, some five kilometers (3.1 miles) west of Canary Wharf, the main financial district is losing its status as the bankers’ playground.

Deutsche Bank AG, which has occupied about a dozen buildings mainly in the City in recent years, will be leaving most of those properties. The German lender will move into Land Securities Plc’s new development at 21 Moorfields after it’s completed in 2021. The bank last year announced a strategy to shed hundreds of billions of dollars of unwanted assets and cut as many as 18,000 jobs.

Both Nomura and HSBC Holdings Plc are marketing space to sublet in buildings on opposite sides of the River Thames, which borders the City financial district, according to people familiar with the matter. HSBC, Europe’s biggest bank, last month said it was reviving a plan to cut as many as 35,000 jobs after the virus forced it to postpone a long-awaited overhaul.

With most of London’s bankers still working from home, however, exactly how much space will eventually be needed at head offices remains unclear.

“The jury on that is very much still out,” said William Beardmore-Gray, global head of occupier services and commercial agency at broker Knight Frank. “But what I am sure about is the main office centers in the world will not get any smaller as a result, because the way we interact is fundamental.”