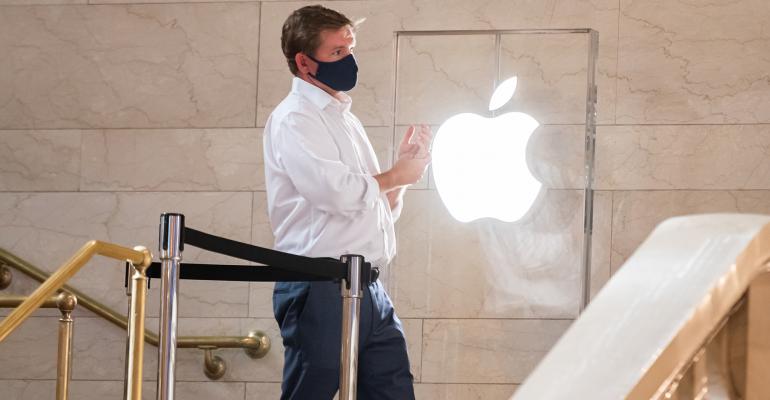 CEO Tim Cook said in June that employees should begin returning to offices in early September for at least three days a week.

(Bloomberg)—Apple Inc. is pushing back its return to office deadline by at least a month to October at the earliest, responding to a resurgence of Covid variants across many countries, people familiar with the matter said.

The iPhone maker becomes one of the first U.S. tech giants to delay plans for a return to normality as Covid-19 persists around the world and cases involving a highly transmissible variant increase. Apple will give its employees at least a month’s warning before mandating a return to offices, the people said, asking not to be identified discussing internal policy.

Chief Executive Officer Tim Cook said in June that employees should begin returning to offices in early September for at least three days a week. In an internal memo, Cook cited the availability of vaccinations and declining infection rates. Some employees of the Cupertino, California-based technology giant have worked from Apple offices on certain days throughout the Covid-19 pandemic.

Yet even with half the U.S. vaccinated, Covid-19 continues to kill people faster than guns, car crashes and influenza combined, according to a Bloomberg review of mortality data. After 10 weeks of global declines in Covid deaths, the highly transmissible delta variant is driving a new uptick. In the U.S., health officials have warned that a similar reversal may be underway: Daily cases have doubled from a low point last month, and hospitalizations are rising again.

Corporations across the globe are grappling with how to adjust to shifting work demands in the post-Covid era. Apple’s decision comes as its own employees criticized the September deadline as too early.

Even before Covid, the company had grappled with a potential loss of talent as workers -- despite being relatively high earners -- complain they can barely afford the extraordinary cost of living in the San Francisco Bay Area. Just a few years after completing the multibillion-dollar Apple Park headquarters in Cupertino, California, Apple is now ramping up efforts to decentralize out of Silicon Valley.

In the tech industry, many workers have come to view remote work as a coveted perk. Several Silicon Valley companies have been bringing workers back to the office only slowly. Facebook Inc. has said it will drastically expand the number of employees who can work remotely even after the pandemic — although their salaries may be adjusted based on their location. And Alphabet Inc.’s Google recently introduced a more permissive return-to-work policy that allows for staff to work from different locations or entirely from home.

Separately, Apple is said to be testing a hybrid in-store and work-from-home arrangement for retail employees, acknowledging that consumers may continue to prefer online shopping even as the pandemic eases.