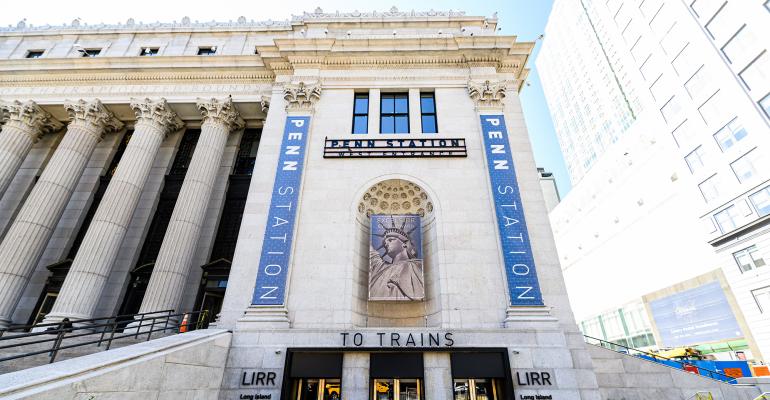 The project, dubbed the Empire Station Complex, could take 16 years to complete.

(Bloomberg) -- A New York state plan to redevelop the neighborhood surrounding Penn Station would clear the way for more than 14 million square feet of new offices, a massive addition of space that would accelerate the shift of Manhattan’s core toward the West side.

The project would use new construction on eight sites to fund improvements to the existing Penn Station and create underground tracks and platforms to the south of the transit hub, according to a draft proposal posted online.

Empire State Development, the state’s economic development agency, is seeking authority to override New York City zoning rules to allow for larger buildings than currently permitted. The agency is working with Vornado Realty Trust, a major landowner in the area, the proposal said.

Neither the governor’s office nor Vornado responded to emails seeking comment.

The project, dubbed the Empire Station Complex, could take 16 years to complete and calls for more than 800,000 square feet of retail space and nearly 1,300 hotel rooms, according to the published documents.

The retail and lodging industries have been among the hardest hit by the pandemic, raising the prospect that existing properties could be converted to other uses. The future of the Manhattan office market is also uncertain, as employers get comfortable with remote-work, and city-dwellers who fled New York in the early days of the pandemic consider relocating permanently.

But the Penn Station project’s long time horizon will give New York’s economy time to recover, and its West side location puts the proposed development in the middle of an emerging office hub.

The first phase of Hudson Yards, a few blocks west of Penn Station, included more than 8 million square feet of office space. Macy’s Inc., meanwhile, has proposed building a 1.5 million square foot office building atop its nearby flagship store on 34th Street, a block east of the train station.

For its part, Vornado is in the process of converting the former James A. Farley Post Office, across the street from Penn Station, into a massive office building.The company has said it will spend more than $2 billion to redevelop over 5 million square feet of real estate in the area.

The state’s plan would likely require agreements with the Metropolitan Transportation Authority and other parties, according to the proposal. The state is holding a virtual session on July 20 to discuss the project.

To contact the reporter on this story:
Patrick Clark in New York at [email protected]

To contact the editor responsible for this story:
Craig Giammona at [email protected]